We need a way to get plex

The problem with this would be that the reason eve is able to make money is that even when you buy plex with isk off of the market that plex was previously bought by someone with a credit card, making it drop in space even in small quantities would make it so that CCP would be making a lot less money.

I’m talking about stuff such as like one or 2 in a 3.2% chance to spawn site with the plex being a .7% chance of even getting

fare though the skill extractors though?

CCP will first consider more ISK faucets if they want us to plex more. Plex will NEVER drop as an item. (Quote me when CCP does this.

tomorrow morning an update comes out with this happing

I would not look like the most creditable person.

I have read other threads just like this in other games. Didn’t think I would see one here… eh maybe.

Plex - Diamonds - Zen etc… It don’t grow on trees! Dear CCP, I would not only like to play your game for free, but I would like to get paid by you, while I play for free. Sincerely Yours, All of us entitled players.

Let’s see while I am at it, I better trot off to my bank - they give me free checking already - and ask them for a 0% interest no payment loan for the next 30 years. That works right?

Over in other game forums, players are not asking for “free premium currency” they are asking them to place a lower cap on what other players are posting for the sale price. I see it runs 5 billion to 1 here, I believe it is more than fair to ask you to grind or pay.

Meanwhile over on Black Desert, you can’t touch Pearls without cash. If Pearl Abyss ever casts their influence upon CCP, you could find no Plex at all in the market for ISK. You have a good thing here, don’t rock the boat.

Plex will NEVER drop as an item. (Quote me when CCP does this.

It’s been a while now but CCP has done it in the past during Events, basically some of the Dev’s would be in ships loaded with PLEX that would drop when destroyed.

OP was referring this to like an NPC drop say in special/normal rats etc.

Yeah, that was PvP.

And they’ve also had PvE Exploration / Scavenger Hunts with PLEX stashed in cans hidden in various locations. Each day of the event they would post location hints on various media sites, like Twitter, Facebook, etc…

Anyway, in the past CCP has indeed placed PLEX in-game as a reward drop. Course it’s always been to get more players involved with the events.

But yeah, I agree, CCP would never make it a permanent thing…

Anyway, in the past CCP has indeed placed PLEX in-game as a reward drop. Course it’s always been to get more players involved with the events.

Yeah for one of the first events you could get a plex as a drop just by running the sites back when 1 plex was a month of game time, not the 500 it is now. Got a few of those that event and havent seen them since… good thing too imo.

It does as a rare drop in the crates of Project Discovery.

abilty to find it out in space

Lucky you, that is already the case, just warp to [ Parchanier VI - Moon V ] and grab 4500 PLEX from the container. 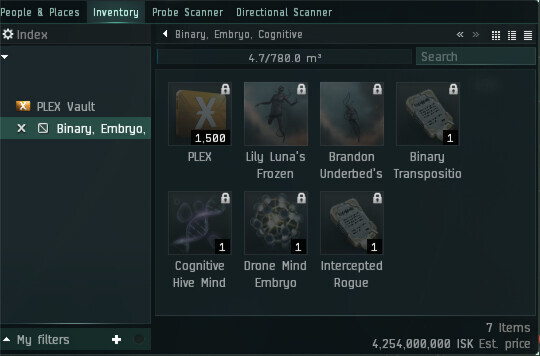 (Note that screenshot was taken a long time ago by someone else when it had less PLEX in it, nowadays since quite some time it has 4500 PLEX instead.)

It’s all yours, just grab it before someone else takes the opportunity as it’s now public knowledge.

Do a PvE thing

lol, sounds like a good title for a new Permaband song…