What happened to Project Discovery

From today’s dt i get “task retrieval failed” every 2-3 samples.
What happened? What reason to do such a change to gameplay?

Aliens are jamming the research and don’t want their Dyson sphere detected.

What’s wrong with the project?
Now i have this. 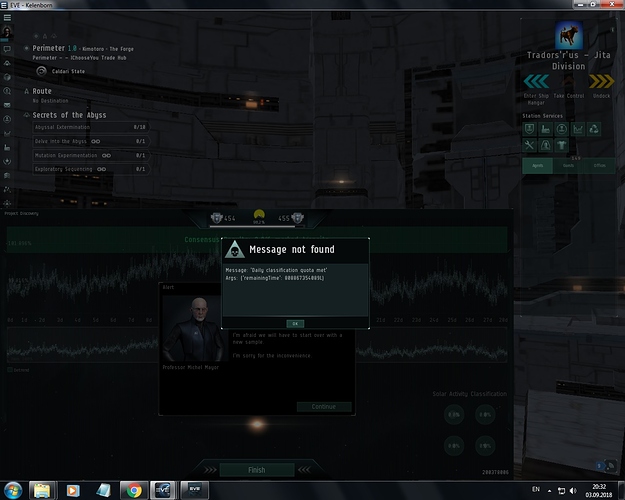 Yeah, I’m getting that error too. Sent in a bug report. 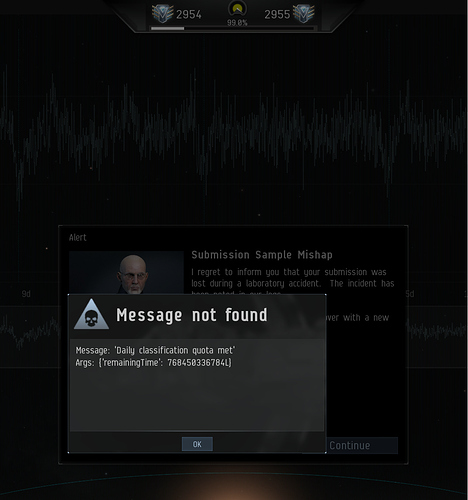 You guys didnt happen to be botting PD, by any chance? I wouldnt be surprised if that’s a specifically tailored “■■■■ you” message for people blocked out of doing PD.

Got the same problem since yesterday, task retrieval failed keeps popping up. I’m just trying to do my daily 10 samples…

If there was a way to Bot Project Discovery. NASA would give you money… Lots of money.
One of the main reasons we’re doing this is to provide right and wrong answers for machine learning. If a bot could do it, they wouldn’t need us.
But I’m back on Project Discovery today, still getting the occasional error but nothing that’s really stopping me.

Same thing) Sorry for bad english, but…
People thinking in a wrong way about botting, RMT and so on.
One second they’re crying on Youtube about all stupidity and complexity of PD, and on other hand they’re here, thinking wrong about people just loving…OMG legal way of gaming they love. No, it’s a wrong way.
Already did the petition and bug report. We have to wait until devs will get it.

Is this the most obvious case of botting / exploiting in the last 12 months?

Nope, this has been happening to me these past 2-3 days, you dont have to do many signature samples before it gives you that “Task retrieval failed” and doing about 10-15 levels worth of signatures during your session gives that “Daily classification quota met” message (it dissapears after you restart your client). Not everything in every single game has to be because cheats or bots.

It is not stopping people from analysing new samples, but it sure as hell is annoying to be stuck clicking “continue” again and again until it finally gives you new sample.

And as a last note, if they truly were trying to give the “finger” to people suspected of using bots, they probably would simply stop you from doing any samples.

After today patch things are getting worse.
Too many errors, too many delays. PD is becoming weird and unplayable.

Yeah, seems like they managed to change the message from “task retrieval failed” to “you are going too fast” (job well done).

After today’s downtime I feel that it was indeed intentional to make the analysing much slower and harder to just click your way to victory, which is a good thing, but things could have been made better by just giving minimum timer per sample and no matter how fast you analyze or click-spam “finish” it wouldn’t allow you to continue.

Also my gut feeling is that they are either closing the project discovery or going to change it into the next “phase”.

It’s telling me I’m going too fast with an accuracy of 99.0%? Uh huh. Getting 10 levels per day is going to take forever at this rate. Guess I’ll be stuck at 300-something.

I agree, though: The most annoying part is the sudden change; No patch notes, no “You need to spend at least 10 seconds each sample”, nothing. It would be nice to hear from the devs why these changes happen instead of them appearing out of the blue.

I’ve noticed this too.

I’d really like to see CCP nerf those botting PD, rather than punish people who enjoy the minigame. It’s rarely functioned perfectly and to do this without any notice for the change is disappointing for those of us who engage with PD manually.

It is quite annoying. If they want people to slow down then fine. put a timer in. But this was the wrong way to do it.
Also it shouldn’t be a thing if your accuracy is at 99%.

Either way. Dev’s, please fix / undo whatever has been done to PD in the last week.

There is a way to bot PD.
Because PD you don’t have to actually analyse it, you just have to train your bot to memorise the samples (which are handily colour coded in bright colours for easy recognition in the future), and hit no transit on anything that isn’t a test sample.
So you train your bot to screen match the sample tests and spam the rest with no sample without caring about right or wrong.

The easy fix to that is to replace the challenge slides with new ones every few months.

Then the bots relearn every few months. They would have to replace the challenge slides on a daily basis to even start to challenge the speed bots can chew through the slides with.