Yule Ball at L'Amore in Ballo 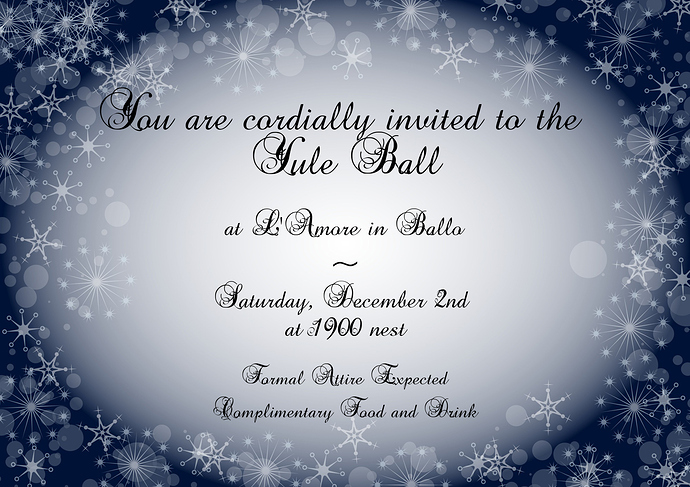 Unless you have other pressing plans to attend to.

Angel, you’re the only one to press on.

Would be nice to see some CONCORD SpecOps breaking in.

Also would be nice to see those, who will share drink with pirates. Quite a loss of reputation in every Empire and civilized society!

I pretty much can, everywhere. Guns blazing and stuff, you know.
It’s just my priority is to fight serious enemies instead of chasing lousy pirates all over the cluster.
I am a soldier of Caldari State, not CONCORD’s pawn.

Really? I would love to see you try, sweet cheeks.

You should watch your back Ms. Raske Diana Kim might send the vast armada she personally commands as a Caldari officer against you.

You should be terrified.

Shaking in your formal boots.

You should be terrified.

Oh. You are correct. I most certainly should be terrified. Being handcuffed by Diana Kim? I can think of nothing worse.

Oh. You are correct. I most certainly should be terrified. Being handcuffed by Diana Kim? I can think of nothing worse.

Ohh I didn’t know kinks were allowed at this party.

Bump! A little over a week to go!

Now, now, Diana. It’s not an ‘Angel Party’. Whilst Ms Laske has had ties to the Cartel, the function is being offered under the banner of the L’Amore, which is a reputable business.

And honestly, if I didn’t talk to people who have had ties to factions with a smirched reputation, I’d be as silent as one of those Achuran monks. Most capsuleers go through a phase of ‘Realpolitik’ to put it mildly.

Thanks for your vote of confidence and support

it means a lot.

I, too, have briefly affiliated with pirates.

I’m only putting this here so Diana can add it to her rants against me, it’s such fun.

Regardless of past or present affiliations, it is important to measure a person by their virtues as well as their vices. Moderation is a key facet of The Way, and therein a certain civility can be afforded to even the most ruthless of people in the world. Madam Raske, whatever her affiliations, is a woman with a tactful, beautiful mind, and at the very least offers pleasant conversation, which is more than I can say for the majority of the IGS.

The fact that she hosts quite the grandiose establishment that this ball finds itself truly is the icing on the cake. I look forward to being there, provided the time.