20220928 - [Solved] Issues With Market Being Unavailable in The Forge Region

We’re investigating reports that the market in The Forge region is unavailable after downtime.

More details to follow as investigation continues. Apologies for the inconvenience.

Update 12:11 - Found the cause of the issue. Looking into correcting the issue.

Update 12:18 The Forge market is back open for business.

Thanks for your patience.

At some point you should bring it down and keep it down for a full day. Some kind of in-game event where some evildoers attacked the infrastructure. It would be interesting to see how it affected the trading landscape both in short and long term.

Umm, I don’t want to be that guy but…, clearly not, mine still doesn’t work 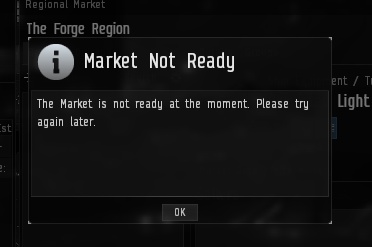 At some point you should bring it down and keep it down for a full day.

Why stop at a full day? Keep it down until the people start to riot, might make things more interesting.

Some kind of in-game event where some evildoers attacked the infrastructure.

“Triglavian ships have been detected in the Jita system. The marketplace at Jita Station 4-4 has been closed until further notice, to secure the goods inside and the transactions that take place there. If you wish the market to open as soon as possible, please help us fight the Triglavian threat!”

The Trigs already demonstrated they can manipulate the Jita market during the run-up to invasion. Wouldn’t be out of line to say they crashed it, without even having them attack the system (esp since them attacking a system with the wrong kind of star would be a marked deviation from their established behaviors and apparent motivations).

We’re investigating reports that the market in The Forge region is unavailable after downtime.

That comment was worth a Month’s Free Sub at least…