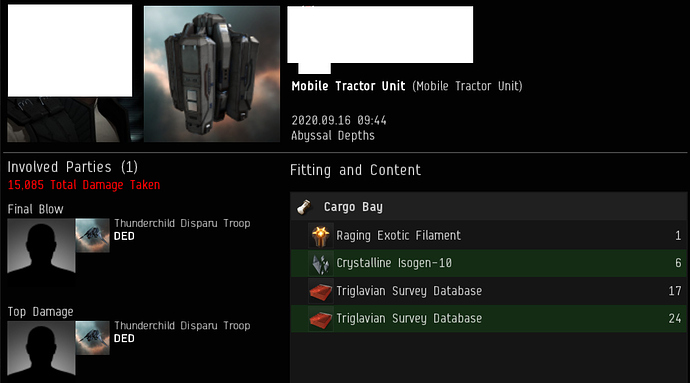 So you mean the AOE weapon… actually AOEs… Who could have thought.

thats BS, MTUs should not be hit

Why not. they are a lockable shootable object. Vorton projectors hit anything that can normally be shot at. Just don’t orbit it when they are shooting you. Positional awareness matters.

then they should damage their own kind as well

also they are OP, Thinderchild in Abyss spits 1500 alphas

also they are OP, Thinderchild in Abyss spits 1500 alphas

Ok… And what’s the cycle time on that alpha? Because that’s pretty low alpha really.

Thunderchild are nothing just use a mwd and kite them.

Trying fighting 6 drekavics and multiple kiki + damavics at the same time, that’s the spawn from hell.

i am not saying that i cant fight Thunderchilds, i am saying they are annihilating my MTUs

and none of NPCs were ever shooting MTUs so far.
I dont think its a good idea or even intended.
If it is a true AOE then it should hit their own

They aren’t targeting your MTU (which would be new behavior) - you are too close to your MTU, and area-of-effect attacks are hitting it. No game objects that can be attacked by players are excluded from NPC-generated damage, only from their targeting AI.

Also: they do hit each other, if fellow NPCs are in the target zone for the weapon. The same as they can hit their own drones, and presumably any NPC-owned structures. They have the same weapon behaviors as PCs - and that is how it should be.

Edit to add: modules always behave exactly the same way, regardless if whether it is a PC or NPC ship. NPC AI has nothing to do with how the ships function - only with what actions they choose to take. Hitting a non-enemy object in space with a non-targeted weapon effect is not AI-driven behavior, it is a function of the module.

If you used the same weapon, and shot at enemies near your MTU, you would be at risk for hitting the MTU.

that’s why i think the entire Edencome weapon mechanic is broken.
I just generally dont like the idea of Palpatine type of zapper weapon.
It also poor idea for a wepon that spreads damage accross multiple targets, which means it takes longer to kill, which means you get applied more DPS.
The goal is to reduce incoming DPS asap, spreading damage does not achieve that goal, unless your spread damage is capable of 1 shot kills

therefore they would pod you “accidently” if they were introduced outside of abyss and it would be ok for you?

The Trigs already pod people, on purpose. We crossed that bridge a long time ago.

everywhere or on gates only?

Everywhere. Trigs and Edencom both pod people they are red toward. My opinions on this have already been covered elsewhere and are not relevant to this thread.

OP claimed the NPCs were targeting the MTU. That is incorrect. The mechanics of this weapon system are to hit multiple objects within X distance of the targeted ship per shot fired. This makes the weapon very unpredictable, regardless of whether it is a PC or NPC flying the ship, and it has been extensively discussed in the threads where the module was launched. There are many reasons why few players use this weapon system - the risk of actual friendly fire killing your own drones/MTU/etc is one of them. With NPCs now also using the weapon, it’s downsides are all the more evident.

And what is DED doing in ABYSS killing capsuleers anyway?

Does not make any sense at all.
Trigs, ok sleepers ok, drones, pirates, all ok, but DED !?!? cmon.

Nullsec missions are crawling with those conniving, meddling government strongmen. It is hardly surprising that they are in the abyss. No doubt it is part of a power play so they can get Concord installed in the Triglavian systems.