Any Crimson Harvest Pro's Out There? 🎃

Does anyone know what, “Commit to the conflict to uncover further hidden sites” means? 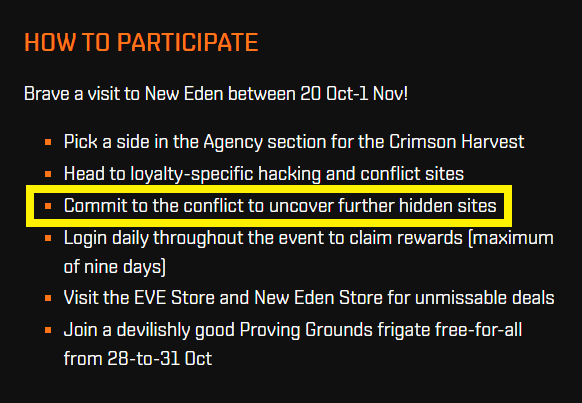 Assuming it’s not just selecting one side or the other… 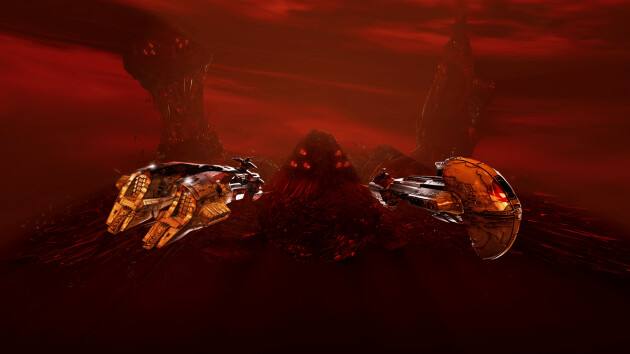 If you commit to the conflict, you can uncover hidden sites.

If you commit to the conflict

Thanks, I’m trying to get it to open on sisi but it’s broken. I’m not sure how hard the sites are.

Depends on the site type. The visible (not scanned) ones are significantly hard - you warp in, frigates that start 70km away are on you in seconds with 4-5 types of ECM/warp disrupt, and the cruisers are already firing. And that’s the easy part.

As for the “commit to the conflict”, not sure but I think that’s the part where some sites can deliver an escalation on completion. And the escalated sites are the highest rewards.

Does, “Find frightfully challenging hidden sites for greater rewards” mean that you have to have a probe launcher to find them? 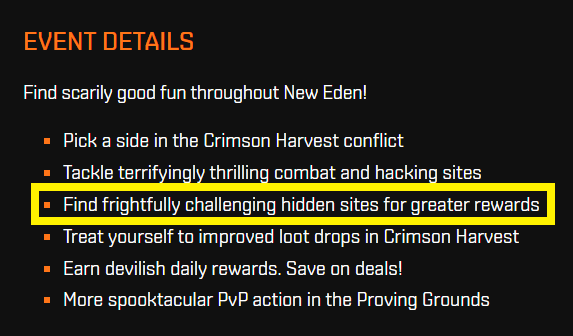 You need to be careful or you will wind up in the WORMHOLE OF HORRORS.

And that’s the easy part.

I’ve read that the Gila is the “Chosen One” to run these sites. Any recommendations? 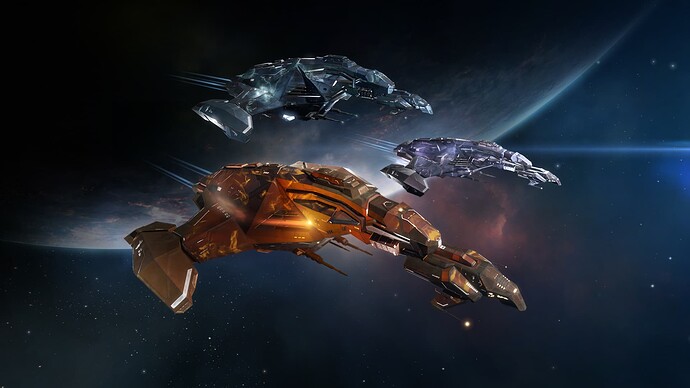 I only poke at the sites to see anything new has shown up, not a pro.

From what I saw the last couple years summaries are still valid:

Afaik Gila’s can do these sites (there’s a build mentioned in the first link) but can be tricky. Of 3 sites I visited so far, 2 of them had 2-3 Drekavacs farming them. Not sure if that’s the new go-to build for this or just that a related group of players was in the area.

(They were all suspect so may have been doing other than just farming the sites.)

Of 3 sites I visited so far, 2 of them had 2-3 Drekavacs farming them. Not sure if that’s the new go-to build for this or just that a related group of players was in the area

Relaying my observations: Trig ships indeed seem to be the choice of many pilots.

They have increased drone aggro for a reason.

you have to commit
not half ass , don’t stay in the wall , go for it
and by it i mean the conflict

I just finished a Tetrimon site. The loot value was 52m from the BS. No NPC bounties like the Blood Raider Site. 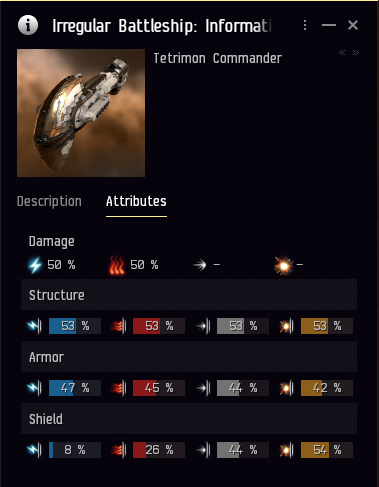 Are you going to try other fits?