Barges/exhumers the new speed machines - not

I Have a question for all

the only practical way for a barge/exhumer to move, in a belt after the change, is to place bookmarks at each end, and the middle, then warp to the planet then back to one of the other bookmarks.

Because game not reality, and that’s what CCP believe is logical for play.

Well, I don’t know what exactly you’re looking for in a fit, so I’m just going to throw some random stuff at you.

Woops, didn’t need that PDS on this Skiff. 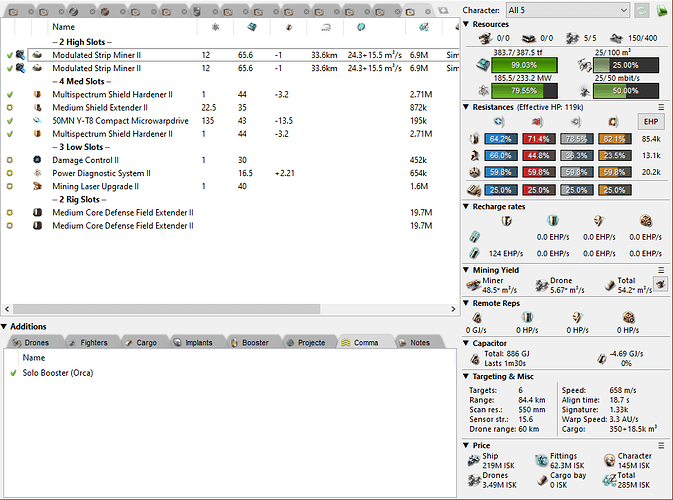 Here’s a mack. Hardly a speed demon, but it’s going faster than 175m/s. 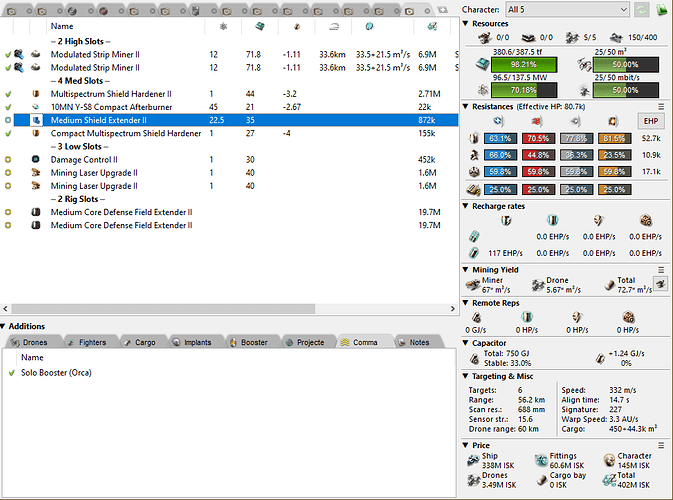 Sigh, if only you could fit an oversized prop mod on hulks…

I never considered a prop mod necessary when mining. So, I’m curious as to why you feel it so important to have one. Don’t get me wrong, I’m not saying you’re an idiot or anything. I’m just trying to understand what the benefits of a prop mod are, and when you’d want to use one.

The proc was able to do 400-500ms before the nerf. I never tried giving a MWD to a covetor or retriever, as they didnt have enough mid slots to play with, but with the procurer… that was one of my favorite points, I could zip around and not have to warp out/back in… as I could easily MWD towards not so distant rocks.

After the nerf (update), the same MWD that was fitted… was getting the Procurer to just do 180ms, so it’s not like I was experimenting with a different fit, all my Procurers had MWD’s installed. Now, they wont work. You can refit to a 10mn AB, but they then barely hit 220ms.

CCP nerfed the align, speed, mass and other things, and now the Procurer behaves as if it was twice the size of a Hulk. CCP would need to redesign the Procurer so that it looks the mass that is now… but I would hate you even more than I already do.

I kind of like the other changes, but this thing to the Proc… is a blasphemy. It was fun to fit my Procs with dual scrams/wed and MWD, hoping for that occasional attacker to show up, and grab them by the pants. But no, CCP seems to think that having 4 mids will make it too strong.

CCP, people that attack barges… they never come with less people than they need. No PvP out there will go face a Procurer with just an Astero (they will try, I know) but its more fun if we can at least grab them and force them to dance.

You removed the mids and gave them to the Covetor and Retriever, which have no place on hostile space (unless they have PvP support nearby). So I guess the Procurers were more hostile than the space they were in…

the only practical way for a barge/exhumer to move, in a belt after the change, is to place bookmarks at each end, and the middle, then warp to the planet then back to one of the other bookmarks.

Whilein warp to the belt drop a bookmark just before landing. With the right timing it is 150-500km away.

Now you can warp to that bookmark and back directly to a rock.

I never really felt the need to do that, I usually bookmarked the next rock so that when I warp off to offload ore I can warp back on top of the next rock.

If I’m staying inside the belt because another ship offloads, the slow pace of mining means my slowboating barge can get in rsmge of the next rock while the previous one is cycling.

Either way, I never bothered to put a propmod on barges. Waste of a mid slot and fitting space.