Big ZERO Every Time I Open my Wallet

At the risk of offending the programmer that wrote the code to display the ring chart in the wallet’s overview, it is not the greatest thing since sliced bread. Can I set my wallet to default to a page with information that is more useful to me?

Hi, welcome! What would you like that to show you? 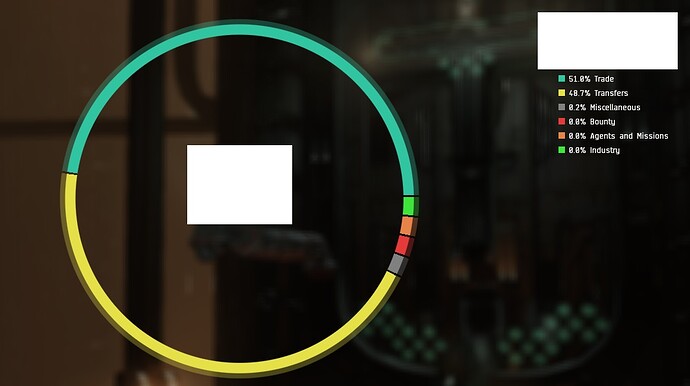 I’d probably go with Market Transactions, too. Simply recalling the page in use when the wallet closes and returning to that page upon reopening would be great.

I would like more intel on that circle if I could as it does help seeing the larger picture when thinking about time spent on which activity.

I would like to it personally to show me how much time I spent looking/searching the regional market in the last 30 days or the number of times I had opened that window in the past 30 days.

Eve Online is about mouse clicks, how many mouse clicks did I make while resizing the various windows?

How many Evemails did I actually open and reply to, what % was that…

More detail or the option to write our own.

I would like to it personally to show me how many bottles of Aiko’s bathwater I’ve ruchased the last 30 days.

Speaking of something personal, maybe it could track how much est. ISK worth of loot I’ve stolen the past 30 days.

I had already mentioned that I only purchased the one bottle and had since been watering it down using PI Water extracted from the planets. I have my alts working on their own PI also. I do hold many reproduced bottles (copies) and can contract a sample to you if you so desire.

can contract a sample to you

Very kind but never would considered it it, but even if I did it would be cruel to interrupt the flow of your daily dose. The withdrawal symptoms can be nasty, wouldn’t wish it upon anyone.

When you open the wallet, the first thing you should see is a banner ad that redirects you to buy PLEX from CCP.

Uriel the Flame You do know that not only had this thread turned in some awkward direction for the original poster to return to read but has now become free space to the likes of brainwashing propaganda that could potentially corrupt a new Capsuleer when their question was 100% based on an actual improvement request.

Can I set my wallet to default to a page with information that is more useful to me?

The only possible way to set yourself up with the information could be via using this method;

Look past the slice bread comment and become the toaster!

It used to do this. I don’t know why it now defaults to overview.

@Iceacid_Frostpacker Your fault for always derailing into off-topic stuff.

It used to do this

Can confirm never had this as default since it was introduced as it is useless for me personally so had transactions open by default.

I don’t know why it now defaults to overview.

Because in true CCP fashion they “improve” things in a way it breaks old stuff and don’t do proper testing or even just don’t care (as often even if reported it is never fixed or just years later).

Can Can confirm also that I use to be able to open my wallet and the name at the top use to read something something then I would become slightly tilted because I use to have to click on the Overview myself. I like round circles as they remind me of rocks.

Goddammit now its doing it to me.

Right, fortunately I can leave it on Corp Wallet and itll just default to that instead.

Echoed - Eve UI developers are not as good as they think they are.