So, with CCP hard at work on optimizations and code rewrites to improve the responsiveness of fights, perhaps something that could be added to the drawing board is the concept of shield and armor grids. I don’t think it’s possible, and it wuold require a HUGE amount of work on CCP’s part… so it’s more of a thought exercise than an actual request.

Your kidding right xD Bigger is better in this patch if you have a super, your drones will web a target down to nothing and scram them and track perfectly with capital sized drones even against the best sig tanking frigs with drugs and halo set. Sig tanking is dead only speed tanking is left.

For this to work you would have to implement submarine like controls where you don’t have to double click to set heading or try and use flight sim controls at 1hz server ticks.
I’m also not believing that this is very practical given the size differences between EVE ships.

The idea is a nice thought, but I think too many things simply aren’t built right for this to feel good & rewarding in EVE.

track perfectly with capital sized drones even against the best sig tanking frigs with drugs and halo set. Sig tanking is dead only speed tanking is left.

… no they don’t, also speed tank and sig tank are one in the same

I’m slightly exaggerating, close but its different they go hand in hand yet differ.

Only if the cap pilots are bad, if those drones land scram/web they track perfectly, if your moving fast enough to keep out of range that’s a different story, but that’s not tracking that’s keeping up tracking is when they are already in range and shooting. Try testing on the test server 1 set just alpha’s through my wolf with a halo set and strong x-instinct.

if those drones land scram/web they track perfectly

Try testing on the test server 1 set just alpha’s through my wolf with a halo set and strong x-instinct.

Manual piloting takes skill and should be rewarded. By adjusting your ship’s course, you can have substantially better tank. Conversely, failing to adjust in time will make you easier to destroy.

The ship who are the best at manual piloting because they are actually agile only have front and back grid so to be of any use, they have to fly in a straight line toward/away from the enemy to get any benefits? Hell I just checked back to be sure and frigs only get one so either straight line away from enemy or toward enemy.

I’m pretty sure manual piloting is rewarded pretty well already, if you can’t hit ■■■■ with your big ship you either need to match transversal or maybe use those mids/highs to fit webs/neuts? Plus, manual piloting is what keeps small tackle ships alive in the first place.

if you can’t hit ■■■■ with your big ship you either need to match transversal or maybe use those mids/highs to fit webs/neuts?

or you know bring friends that can paint/web/scram/tracking enhance.

I was on my way of writing a huge post figuring out the vector math behind your idea, and stopped when I realized that it is absolutely not feasable. I apologize for any mistakes, I have not had coffee yet and this problem is … neat.

I mean, being real, it brings a huge amount of problems with it. First of all the fact that shooting ships are rotating all by themselves, which would throw this completely out of wack anyway. And as ships that are being shot at usually also are ships that shoot, which means they are rotating by themselves as well, this idea just makes zero sense.

But anyhow, I had a look at it.

There are a few things needed to do this. First, the CPU needs to determine the relative positions between a point (the shooting ship) and a line (the targetted ship). It has to be a line, because a point does not have Fore, Aft, Starboard, etc. A plane might be better, but I can see how it would work with a segmented line. Or maybe it is the lack of coffee.

Okay, after the CPU had calculated where the point/line are relative to each other, it needs to figure out what is being hit. So, let us assume you want the player to be able to decide at which point on the line (the targetted ship) he wants to shoot. This removes quite a bit of complexity, which is a good thing.

So, after the CPU determined the relative positions between the two entities (so we know on which side of the target it actually hits something), the CPU has to determine where a straight line (from the turret/launcher to the target), hits the targetted ship. A Line to Line intersection test.

There is more, but this is enough already and I finally have my breakfast ready.

This is computationally expensive. It would work out for a few ships, but once it hits a few dozen you are adding quite the load onto the node, even ignoring that when there are so many ships, this whole concept goes down the drain anyway.

It would work for relatively primitive games like WoT or WoW, but not for EVE ONLINE with potentially thousands of ships around. You would add quite the load even in a system with just a few dozen ships shooting each other and more could come in all the time.

You forgot to add that ship heading would need to be added to the server code rather than just being a graphical convention. Ships in Eve have no facing. Only position and velocity. 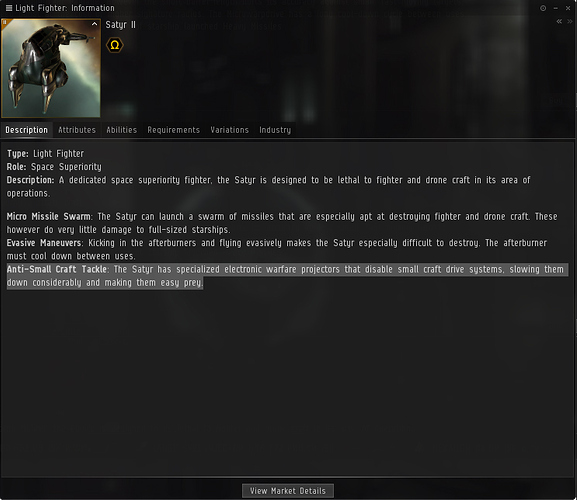 omg actually play the game or at least the parts you are commenting on. not only do those fighters have a 90% damage reduction to anything that is not a drone or fighter they can not even use that ability on them.

wait isn’t that what you told me to do…

I cant use one but iv been killed by one so yes iv “played the game”. You just love arguing.

you have never been scrammed by one though. and you sure as hell were not alphad

I died so fast I wasn’t even sure I was scrammed sure but I was moving at 3k/s then I was dead.

Better post a vid of you tanking t2 tackle drones from a super with a small ship after they have tackle then I’ll have no foot to stand on and you will win.

that sounds like there were either two supers or three max damage carriers that all hit you with SS fighters at about the same time.

the reason i’m arguing so hard about this is because of how weak carriers are.

back when the changes first hit sisi they were op beyond belief before ccp even had any real numbers put in. they were then balanced down to a much more understandable level. however the damage was done. people had hyped these things up to the point that fear got the better of them. people were coming to the forums with claims about what they ‘could do’ or freaking out over losing to them before they knew how to fight them. this caused carriers to be useless.

this is one of those things i was talking about. people not understanding them and having these big boogieman fears in their head. There are two tackle fighters a carrier or super carrier can use. one webs one points neither of them can do damage.

with this said small ships should have issues dealing with carriers specifically and supercarriers to a lesser extent. this is because carriers were rebalanced to be anti sub capital platforms but are highly vulnerable to larger ships like high buffer BBs and especially capitals

i use these on TQ all the time( and i’m discovering i’m one of the few carrier pilots that knows when SS fighters are useable on actual ships). cruisers are your bread and better when it comes to targets. DD are tricky but can be managed. you have little chance against a frigate who knows what he is doing and no way in hell you are getting an inti. this is ofc unless you have a strong support fleet helping you. this is how it should be the only problem is if you have that HAW are better. not to mention the major weakness carriers have to ECM a single griffin can take one completely out of the fight