Hello! Interested in Faction Warfare? Or lots of endless pvp opportunities? What about just making lots of isk? The United Caldari Navy is recruiting pilots interested in reclaiming Caldari star systems in the name of the Caldari State through the Caldari Militia! We are New Eden’s only real attempt to unify the Caldari Militia to bring the Gallente Federation to their knees! Join us as we bring glory to the State and get rich in the process! 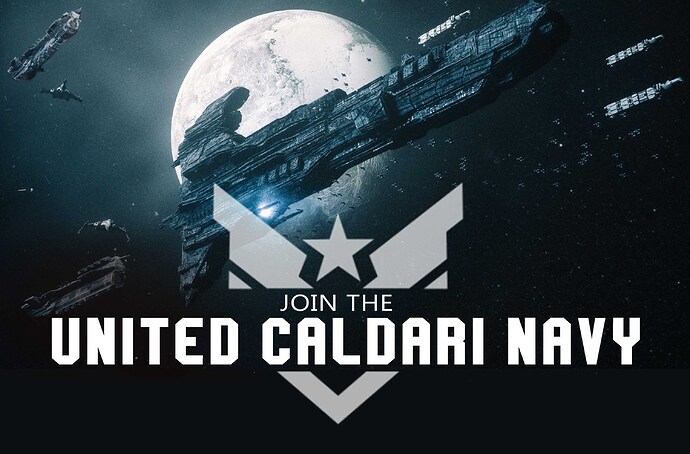 I love these guys! Awesome bois to fly with… join us for a great time no matter how much experience you have in pvp

Definitely the best Corp in EVE by far!

+1 Amazing experience as a newbro and I feel like I’ve already learned a lot.

What’s your policy for dealing with isk farmers that run unfit cheap ships and flee the moment anyone gets near their plex?

Anyone who is pushing to liberate systems from the Gallente terrorists are fine with us. All we care about is returning those systems to their rightful owner.

I’m more referring to D-plexers that sit on the edge of a plex’s boarder, in unfit ship, abusing a game mechanic for LP->ISK farming.

Do you allow those people, and their alts into your corp?

No. No mayor CalMil corp (member of SPD or aligned with SPD) use that. As far as I know minmil-amarr battlefield is the host of such activity, the matter of fact, currently majority of minmil bots have been turned to gallente in order to oplex/dplex certain areas.

We are all in favor of a good game, it doesn’t really matter if X faction gains more ground over the Y, but it should be done within the game mechanism.

This is why we recruit and try to cover the battlefield with real people, instead of galmil/minmil bots.

Hope that answered your question.

We play by the rules and dont exploit. We’re here for pvp and decimating Frogs

Couldn’t have said it better! We love us some frog legs

Haha the transfer is complete!!
All systems Operational.
Green is go.

Thanks for the bump!

you dont like bots? unfair gameplay? Here is your place then!
If you like people using bots, or need outside corps for help, head over to gallente militia.

The UCN slays all the bots in FW! Bots beware!

bump for the best fw corp in new eden!

Bump for the caldari!