You should trade instead killing our poor pod !!!
You would see that this sentence is real

There is nothing that can fix that in player-driven market. If an item is profitable enough to make without too much effort, a lot of people would do that, driving the price down.

Learn some skills, establish some connections. Or move somewhere where there is less competition.

ore I mine myself is free

It is not free, but there is a nice 5% discount.

High supply and low demand has had it’s effect on the market. But there are still some items out there that make a half decent margin.

Outside of jita you’re going to get a wider bid/ask spread so you can get some cheap materials if you set up a buy order and better sale prices if you don’t mind it taking longer to sell. Of course getting those materials yourself means you don’t pay broker fees and someone else’s sales tax on them…

You can also avoid your own sales tax by establishing a ‘buyer’ or many. And trade your goods via private contract.

What do you expect to hear? Nobody will tell you the secrets to get rich fast.

I’ve been doing what I consider small scale industry for close to 5 years.

We are currently passing through a period of disruption where harvesting raw material will be more difficult and consequently more expensive - the result should be that you are selling into a rising market - a good time to be a producer!

EVE’s economy isn’t as how it is in the real world, where you can buy primary and/or secondary resources to built a final product and have a profit. Some raw materials are more expensive than the final product.

Try to aquire like 50% of your own resources and sell far from Jita.

It is until you show up with your cult.

The best advice I can give you, especially if you’re in high sec, is to find a null corp/alliance that will let you in. You’ll enjoy the game more for one, and you’ll be in a better position to start your industrial career. Most alliances anymore have systems in place where people will haul your goods to and from Jita/Perimeter for relatively cheap. While this is an extra cost, it will be made up for by the savings from building in null. That’s assuming you try to haul and aren’t satisfied trying to sell to the local market or build the smaller doctrine ships (you’ll learn what I mean by this quickly if you move out there). To that end, as cool as they are, try to avoid the urge to build anything larger than a cruiser the margins are horrible, and they’re massive so the cost to move them will see you in the red before they ever hit the market. These hulls are typically built in-location anymore for this exact reason. So stick to drones (build based on what’s used in the region - just ask whoever accepts you they’ll know what I mean), modules, and small hulls like Sabres, these are sure to sell quickly no matter what market you move to.

Hope this helps and good luck! I’m just sorry you’re starting off in the current market, things won’t be easy.

find a null corp/alliance that will let you in. You’ll enjoy the game more

Pretty obvious that he’s an industrialist, or at least wants to be. So please, tell me how you figure he’d be happier in low sec or remaining in HS where this would be greatly hindered.

Low sec is all but dead ever since the moon mining changes years ago dried up most group’s primary sources of income and content. I’d love to see you try and prove me wrong on that one. Hell, the recent changes are CCPs attempt to revitalize it because they have fully recognized finally how badly they’ve screwed over the people who call it home. And I really hope you aren’t suggesting he stays in HS as a budding industrialist.

Who would be happier working for the nullsec slavelords?

Spoken like an ignorant little s–t who has no idea what they’re talking about. God forbid someone be asked to attend a fleet to defend the space they live in or assist in a war campaign in any way. Most people who do heavy industry/stocking aren’t even bothered about fleet attendance. I can’t even remember the last time attendance was really even brought up at all in TEST.

Null isn’t for everyone, and I’d never claim it to be so. However, one thing is certain, anyone who wants to actually walk the path of an industrialist it is their best option. To say anything else just shows complete ignorance. So take your bulls–t and shove it back up your ass.

I’ve seen much more demand placed on line members of WH and small lowsec corps where if a single person is not pulling their weight in a timezone it can screw an entire op or worse, lead to an eviction. So who’s the real slave? Where do you think a new player, who’s interest is in industry, is most likely to be surrounded by like-minded players and get the support they need to learn and grow?

Isn’t profanity prohibited based on forum rules? Even implied profanity?

People have already made good points, so I wont rehash it all. But just to put it into perspective, I don’t sell anything I make in Jita. And you don’t have to either if you don’t want to. You can often find places that are better to produce and better to sell than jita. 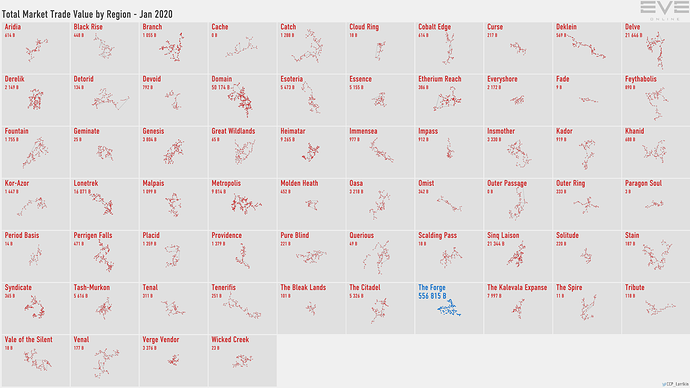 The total trade value of Heimatar and Metropolis are both near 10 trillion isk in January. They’re significantly less competitive than Jita but still massive. If you could capture even a tiny fraction of that, you’d make isk.

Heck, look at Solitude, (or if you’re feeling very adventurous as a solo player, Stain.) With around 200 billion isk in trade value, it’s not a big market, but you could start out and grow there. You could genuinely make things happen.

Thanks @Nasar_Vyron I am in WH space, just moved from one to another corp but still in WH space. but good advice, thanks

I can’t even remember the last time attendance was really even brought up at all in TEST.

Jita is still themain trade hub but 70% of items either are being sold at a loss (I mean in terms of what I can personally make it for) and another bunch of items have so few sales that with the cost of the BPO it is not cost effective to buy/make as a smaller manufacturer.

If you buy a TV from Walmart at full price and try and sell it on craigslist immediately, yes, generally you will sell it for less and not make a profit.