I haven’t played the game pvp wise for awhile 10 years, returned in 2020, but what I do remember was better, everyone cap drops now, battleship pvp is a total loss to me, capitals seem to be the end game for the game.

Capitals should never been allowed to hit subcapitals, end of. HOW DO WE HAVE HAW DREADS?!? They should be deployed agaisnt other capitals and structures and vunerable to subcaps. It totally bizarre these class of ships can hit a barn door outside of the structure class

Honestly, if you dont know how bad pvp outside of wh’s and pocven has gotten, then you didnt play this game pre capitals.

they are in the process of fixing their mistake with capital proliferation… it is quite a challenge to make caps now with the new mining changes.

It’s only 8 years too late for that…

Unfortunately I think the damage is done. It will take another 10 years to undo this tragedy in game balance.

I think cynos are the main problem, instantly appearing point blank range from a target, should be some sort of penalty there. Its abit of a joke, you cant really even scout ahead to see what you might run into.

everyone cap drops now, battleship pvp is a total loss to me,

I think in the last 2 months I have seen caps dropped once on someone, and that was on their caps. If you like battleship pvp come to delve, you can meet a fleet you will love.

Capitals should never been allowed to hit subcapitals, end of.

I don’t think this should be an absolute. I think it should be hard for caps to hit supcaps. Maybe carriers should be able to hit subcaps pretty easily, with dreads being able to blap carriers, and titans/supers blapping dreads, so you have like, a rock-paper-scizzors.

DO WE HAVE HAW DREADS?!?

they are in the process of fixing their mistake with capital proliferation… it is quite a challenge to make caps now with the new mining changes.

The power gap between caps and subcaps is insane, a good balance will never be archived with what we have right now, unless we go back to rock-paper-scissor mechanics.

What we need are more in-between classes to bridge the power gap!

Capitals have awesome unique mechanics and they should be available to more players in their daily experience.
There used to be combat refitting, sadly that’s gone and has taken alot of skill away, but there is new stuff like fighter mechanics and manually aimed AOE effects.

You can perma tackle a Haw dread with a T2 vengeance, run vamps instead of rockets, orbit 500 with ABII and spam your t2 armor rep. Fit

One Arbitrator can damp it’s range to snowstorm visibility. 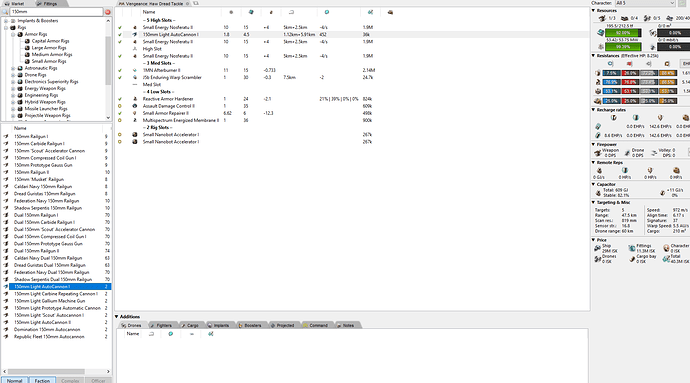