so much for thier promises.

so much for thier promises

I never put a lot of stock in promises made by businesses and corporations because when money talks, bs walks.
On the other hand, if other people’s money can keep the servers going and EVE Online alive, I certainly don’t mind. I’m happy to pay for my Omega because I’m having fun playing the game but I’m not going further than paying my Omega and getting some PLEX through the Omega deals on Steam.
Don’t care for training boosts, I got time, taking my sweet time training into ships and modules. I don’t do instant gratification. If others do it’s on them.

I just want CCP to improve the game. They’re working on it, even if sometimes they use a bat where a scalpel is needed and mess with things that don’t need to be messed with but OH WELL… EVE is still a fun game to play and as long as it continues to be fun I’ll keep logging in.

Yeah they said they’d never do that. They also said they not release limited edition content & they’ve done so 100x times over.

The silver lining of this is that once CCP have extracted all $ amount they can out of skill points, we will finally likely have skill points removed from the game. Putting new bro’s behind a SP wall is not a good way to encourage fresh players into the game.

With SP for $ skill farmers & bitter vets will have given up any glimmer of $ value in their characters so when CCP pull the plug on SP in a couple of years there will not be much crying, maybe even cheering.

Monetisation should switch from skill points to accounts, make botters & multi accounters pay $ not new bro’s. Whether this is sustainable I dunno, but EVE online is in a cess pit now.

Owing to botting, GM & Dev corruption eve IP has tanked in value heavily, this has not been a single event failure it has been long coming. CCP chose 1/4 profits a long time ago, CCP chose cronyism & provided pet status to ‘‘content creators’’ instead of creating a competitive sandbox. The long term damage of this to the sandbox is likely now irreversible.

I dunno I might be old but when I play MMO’s I look for competitive gameplay & I’m afraid that is just utterly lacking in eve online… It’s never about what you do but it’s only ever been about what devs you know which is just sad.

I’m not saying 1/4 profit program was a disastrous, it may have been the best choice for turnover but it’s going to be hard to monetise eve in the future now.

What for. Their is a massive Alts exodus happening😒. They should have not insulted thier clients by rapid and heavily nerfing. They broke what is fixed.

Don’t know where you’ve been but CCP has been selling SP’s for quite a while now.

The daily Alpha skill injectors are SP pulled out of thin air, and they’ve been selling those for quite some time now.

It seems people are forgetting just how long ago these were introduced. I know I keep underestimating how long ago certain changes were made.

Skill point sales are targeted to highly skilled players, not new players. New players are better suited to buy plex and then buy skill injectors. If a new player did this, they would get 2M skill points not 1.5M skill points at the current price.

However, if you have over 80M skill points, the return on your skill injector gets pretty small.

I think you should see the sale as an incentive for older players (higher skill points) to get back in the game. Not a pay-for-win, skill farm attack, or anything other theories out there. With black ops changes, industry changes, maybe there are high skill point players that would like a direct injection of 1.5M skill points to help them enjoy new additions to the game.

Opinion purely, but a different side of the coin here, some might want to consider.

I agree, when CCP implemented SP Injectors with various penalties based on a characters current amount of SP’s, I was already over the SP amount to make it worth it for me to use those Injectors. As such I’ve never bought or used a SP Injector.

However the various SP packages CCP offers at different times don’t have any drawbacks, it’s just straight up SP’s which is well worth it for me to purchase, and that’s what I usually do whenever I can…

For anyone interested in how various methods of acquiring SP stack up to each other, I made a chart back around March when CCP first put out this training bundle: 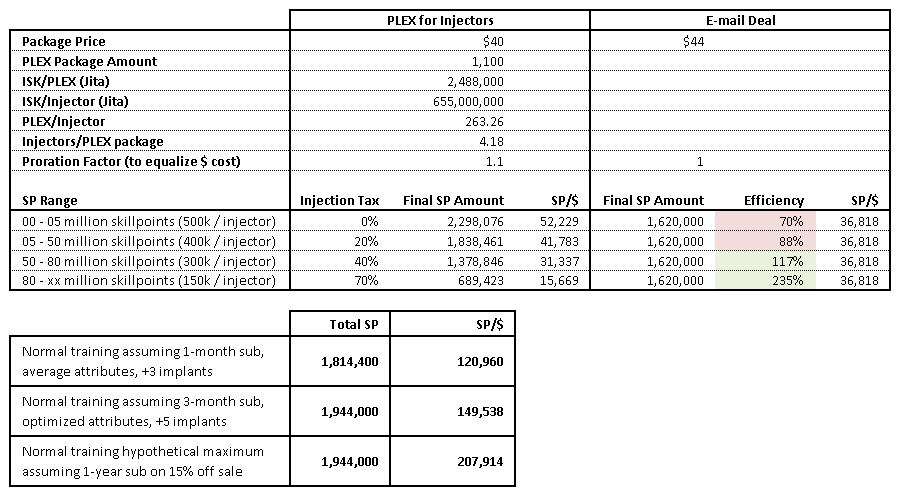 Prices might have changed a bit since then, but the accuracy of the calculations won’t be off by more than a few percentage points.

I’d love to see where you’re getting these imaginary “Eve IP” market rates.

I’d be happy if they removed SP all together, SP simply handicaps new players for no reason. Skilled day 1 players should be able to trash brain dead bitter vets as happens in any competitive sport/game.

CCP has pandered to its pets for too long, the writing was on the wall years ago. I think eve CCP is concerned about the fail cascade that is happening right now.

I predicted a slow death in “eve is dying scenario” but it looks like the camels legs are gonna give way in 2021.

But would you not agree skill points, or the skill tree that is, gives a character direction. You can change that direction and if you want back invested time you can skill extract.

You are essentially saying log on and fly a Titan. I am taking it to far extreme as a day 1 person would never have access to a Titan, but if all pilots are equal, then what skill do you think you can have to out perform the other pilot? I would argue the hundres of skills make up the pilot and is what makes each engagement interesting.

Eve isn’t a PVP only competitive proving ground. Some don’t want anything to do with PVP and others don’t want to mine one rock no matter the value .

Your opinons are appreciated, but I think your conclusions is flawed. CCP doesn’t pandered to pets, there is no failing cascade and Eve isn’t in a dying scenario. It would be the opposite of that. The current changes happening I would speculate puts Eve in a better position to be a bigger game in the future, that will attract more players.

Eve has been subject to several stitched-together ill planned ideas that were good for the immediate bottom line and bad for the overall health of the community.

The acqusition of CCP by PA will go down as one of the big nails. Let’s look back at the acqusition , what great things have been accomplished since then?

Ie, to fly a titan you need the skills but it is just a case of buying it then you are good to go.

I can agree with that, and it has always bothered me to be honest. If you buy the skill directly in the character screen it is the vast majority of the time more expensive then if you went and purchased the skill book. But to have a fee to buy a skill book isk sink, maybe money could be spent better.

On skill points, some people simply don’t like it, and some love them. Different SP systems could be set up, but no matter the change, there would be a effect on the ecosystem. Skill extractors are not manufactured, and are a great isk sink and plex demand generator. There are ways to create tier systems that helps lower skilled players catch up to high skilled players.

Or maybe if you have 600M isk to spend or real money on a package from CCP that supports the games revenue, than why not.

those are only for alphas and the only way alphas can get in a day of training once they hit that 1st sp cap of no skill training.