@CCP_Rattati what is with these statistics? I’ll ping @CCP_Swift in the unlikely event that perhaps he will bring this to your attention.

A quick search of zkillboard shows PvP kills in Highsec declined twenty percent, comparing the past 90 days with the preceding 90. In both periods, the most active PvP pilot in Highsec was either myself or a member of my alliance. So I certainly have an informed opinion about PvP in Highsec. I wonder what you believe is generating all this new PvP content, after you’ve repeatedly nerfed every possible means of Highsec PvP (wardecs, ganking, and suspect baiting)? 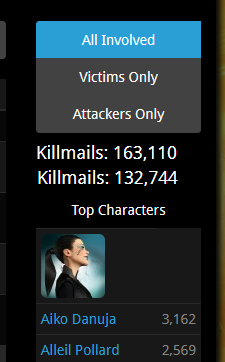 The claim that navy ship production increased 14709% is absurd. That’s either wrong, or grossly distorted - perhaps deliberately misleading? It makes me wonder who calculated these numbers, and whether anyone verified the data.

I wonder whether CCP understands why this game was originally successful. The player count has been steadily declining for years, and the player count was highest before CCP began eliminating, nerfing, reducing, and restricting Highsec PvP content. As a player, I find it disappointing to see CCP continue celebrating the “success” of Uprising, when the players have been expressing concern. Instead of telling us how great things are, have you considered simply talking to us? You know, we are people, and we are willing to have a civil conversation…

Ultimately, this is not what success looks like. We can see clearly that the Uprising uptick was temporary, and the player count is continuing to decline. As someone who enjoys EvE, and wants CCP to succeed, I can only urge you to think more carefully about Highsec PvP. It may be the case that CCP is losing players because the game is becoming increasingly boring, and the blame lies entirely with those who have reduced unscripted PvP content. Many players believe that a safe Highsec is bad for the game’s health, and I once again encourage you to try and see our perspective.

Are you really surprised that their stats are total bogus after the bogus stats in the Your Year in EVE mails?

Nope, I’m just hoping someone at CCP wakes up.

I’m developing a thesis that MMOs are originally successful because of unscripted PvP content, but many players complain because they find the game challenging. Developers hear these complaints and try to address them, nerfing PvP gameplay in an attempt to appease whiners. Unfortunately, the game becomes boring and declines. The lesson is that players complaining about “griefing” are an indicator of a healthy game with emotionally engaged players. Attempts to reduce “griefing” will ultimately reduce the game itself, because the so-called “griefing” was actually just people playing a game.

Rattati has expressed concern about new players being unable to recover from loss, and I think he is wrong. It is very easy to recover from minor losses, of a Venture or a barge. By denying new players this experience, CCP is ensuring that new players are bored, and that they fail to learn basic game mechanics.

A lack of emotional investment certainly leads to indifference and people becoming NPC, just grinding away “doing their job”.

If you look at normal games there’s lots of competitive “pvp” ones out there: all shooters (apex, COD, Valorant, Fortnite etc etc), LOL, Lost Ark, Overwatch. Then there’s “MMO light” like Rust and Ark Evolved and then the “real MMO” like Albion Online. They all do well, they all have quite stable (or rising) player numbers. Lost world was touted to be a full PVP MMO, then they switched it around and made is mostly a grind game, launched it and people still flocked to it to then go “wait a minute, this is boring” and numbers plummeted.

There are also MMO out there that aren’t really PVP focused and do well but still, they have (for whatever reason) a higher emotional investment. MMO that lack that fizzle out.

Nope, I’m just hoping someone at CCP wakes up.

They did. CCP saw the amount of money Candy Crush Saga and Maple Story make every year, and became 100% fully awake at that point.

Rattati has expressed concern about new players being unable to recover from loss, and I think he is wrong.

If they were concerned about that, assuming it’s a genuine problem, they could simply shower new players with additional low-end ships to ensure that they don’t start to truly feel loss until playing for a certain time and weaning off the “tutorial teat” so to say. Or implement something like the “universal income” idea I proposed once that would give everyone a certain amount of “stuff” regularly (which would be more valuable for new players as a matter of proportion than for old players). The fact that they aren’t implementing such mechanics, but are instead talking about “new player loss” while issuing shadow reimbursements for old fat blubbery seal carebears, means that they’re paying lip service to one demographic while actually catering to a completely different one.

Friends from BDO and Albion tell me that their forums are full of the same carebear complaints, and both games’ dev teams have also recently caved in to carebear demands very heavily.

Friends from BDO and Albion tell me that their forums are full of the same carebear complaints, and both games’ dev teams have also recently caved in to carebear demands very heavily

Then the decline will happen. It’s like giving in to wokes: 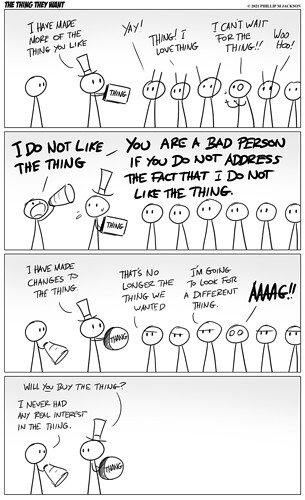 I had mentioned that their lowsec statistic — 75% increase of PvP activity or whatever — was also not a good one. For >3 months prior the Uprising release the Minmatar/Amarr FW Zone became completely dead as Minmatar folks opted to simply not log in until the Transmuters became a thing as part of Uprising, and the Amarr folks captured nearly all of the whole warzone across Devoid, Bleak Lands, Heimatar, and Metropolis lowsec.

This pattern of awaiting patch day is not new, by the way. In my discussion amongst the Minmatar RP-ers, this behavior was considered „normal“.

So it was a cherry-picked statistic at best: half of FW activity was simply non-existent beforehand, so „75% increase“ is meaningless when the baseline is cherry-picked.

I found it hilarious when, upon me mentioning this in the Eve Official discord, a Snuffed Out rando proceeded to make fun of me and pretend I had said (direct quote of his mocking) „Bad thing got better, but because bad thing was bad, better thing is bad“. No, I want better and honest statistics, and this lowsec one is suspect at best.

When the MER is published we’ll be able to confirm CCP’s figures in terms of pvp increases.

I don’t put much stock in statistics when the numbers touted can to be skewed towards the ones claiming the numbers. I feel it’s a bit like polls: unreliable.

It makes me wonder who calculated these numbers, and whether anyone verified the data

I don’t think there was much calculations involved.

“CCP: Dark Numbers Rising”, coming soon to a screen near you!

I think a “safe’ish” HiSec is best. There should still be the potential for lucrative PvP if done intelligently.

HiSec should be more than just a womb for fetal pilots. It should be less risk, less reward - risk though all the same.

“CCP: Dark Numbers Rising”, coming soon to a screen near you!

This is a horrible comparison. Also, fearmongering is bad. Don’t @ me.

I mostly see “anti-wokes” raging here though. Can we get this back on track from pointless whining about irl politics? Or will you demand to be no consequences for clearly breaking forum rules?

I doubt CCP will elaborate on their stats because I think they were published for the shareholders and PA, not the players. As I see it, they know they’re in trouble with the player numbers declining and need to buy time. I’m probably stating the obvious here.

All players can do is keep pushing for changes they know will make the game more active (and I agree it’s likely not making highsec safer) and pray to Bob the higher ups remember some of the lessons from the Incarna debacle. I doubt the playerbase has another Summer of Rage in them.

I also saw those stats and thought that they looked off. I wonder if the Faction Cap production numbers were included in the 34% increase in cap production? Basically it looks and feels like they are inflating the numbers. Which is kindof sad. The actual figures will come out eventually, and if they are caught inflating them for something as superfluous as this it just further erodes their credibility in the eyes of their playerbase.

There is so much information about basic steps CCP can do to make immediate positive impacts on the game. But instead we get deflection. Come on CCP let’s get your crap together, you can turn this thing around.

It’s like if Ford released the new Ford Aikoetta, and then bragged about how production is up 14709%, and it’s like no kidding you just released it… but who do you think you are fooling, or do you actually not understand math? Maybe they should hire me as lead editor CCP Griefer, and then we will have 962849% more newsletters like, “The player count is down because we’ve been killing the game by removing content, and that’s why in the next update we will be transforming New Eden into a PvP hellscape.”

looking at the numbers from the MERs, Uprising was released on 8 November, so counitng all of November and then December as post Uprising:

Interestingly, November which had the 7 day free Omega available had an initial increase, but overall a decrease in highsec pvp, but there was a definite increase in December.

Looking at it seasonally, comparing October to December over the last 3 years:

So most recently, highsec PVP has generally declined in number of killmails from October to December, but last year, there was about the same amount of PVP in December as there was back in October 2020, with indicatively fewer players

note: PCU may not be the best measure of whether there are fewer players, but it’s I don’t have Jester’s data to use as a better data source

Kind of counter-intuitive, but this is just based on counts. I’m sure there will be a lot more in the data to indicate why, but I don’t have the time to dig deeper until this evening.