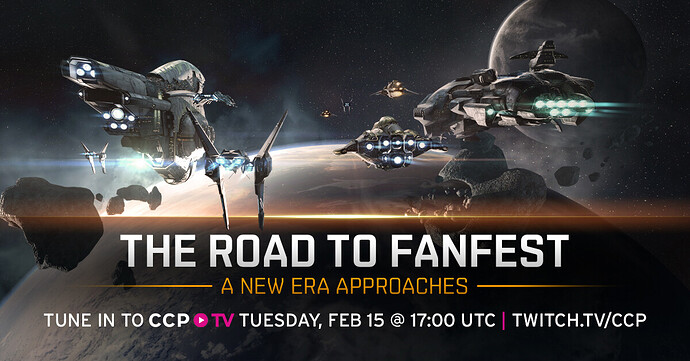 Today at 17:00 on CCPTV myself and @Carneros will be sitting down with CCP Burger and CCP Rattati - our Creative Director and Director of Product, respectively - to chat about Fanfest 2022 and some things coming to EVE between now and then.

If you can’t make it live - no problem! We’ll have a happy little devblog following the stream where you can catch up on everything you missed.

e: And that’s a wrap! If you missed it, everything we covered is in this Road To Fanfest devblog, and more detailed information (specifically about compression) is coming to the EVE Online Forums later this week.

Wonder how many people will be badmouthing ratatti in the comments

As many as the players he has insulted with changes during the last year or so? I.e. all of us still playing.

Edit: When a good chunk of your changes punishes players for playing your game it is not exactly surprising that they get a bit annoyed. We play games to have fun and not to be punished for playing it.

i wouldn’t call it punishment…

As someone still playing, I’m not insulted. Things are more difficult for my prefered plays, but I’m largely happy with progress and change.

Not everything is sunshine and rainbows of course. Quantum Cores, and a few other things utterly screwed how I was operating before. But… well, I’m optimistic for the future, if that makes any sense at all.

If he doesn’t deliver something tangible again and again only throws hot air and empty phrases around, there will be some.

@EveOnline
Tune in today on https://t.co/GBRj9XMTki as @Storn and @CCP_Swift sit down with Creative Direct @CCPBurger and Director of Product @CCP_Rattati to chat about Fanfest and some of the updates coming to EVE between now and then. #tweetfleet

I usually try to avoid poking fun at typos but the “Creative Direct” is quite the hilarious epitome of the last years. Creative Direction cut short, unfinished, cut out of the game, left to suffer. What a happy coincidence this little typo is.

Can there be a vod or recording posted to the youtube channel?

(Also, can the original login themes please be uploaded on the official channel while you’re at it

I agree, I’m actually enjoying some other aspects of the game that I previously have not wanted to try.

I enjoy more isk and PvE that is dangerous so much that you need fleet.

Will you keep ignoring questions from the chat ?

Will there be a NES shortcut button on the live stream? (rolls eyes)

You know, it’d be hilarious if he didn’t ignore this question, just to say ‘yes’.

Before someone gloats at me: I am actually quite satisfied with what I heard and that I actually heard something meaningful in this stream.

Now they just need to keep this level of communication clarity up and employ what they said on stream at communicating and gathering feedback. For instance, for the planned structure changes they should ask for player input well before the design is finished and would potentially need a complete, time consuming rework like the mining changes.

I will believe in what I see at lest one day after patch day. There’s been way to much false promises lately and way to many cases of great ideas ruined to the ground.

At this point I won’t be surprised that CCP softened up just because they finally realized that they can touch the bottom.

I’m excited about Eve for the first time in over 2 years. Including player feedback in a meaningful way plus changes that will increase the fun of playing Eve.

The battleship changes are really nice, but I see 1 problem. either they need to not apply to marauders, or marauders need some other nerf to go with it.

I don’t really like the remote compression thing…it doesn’t make any sense, it goes from sci-fi into the field of magic

The Orca is bonused for Tractor Beam, I liked the idea of playing it as buying ore from other miners on the field, bring it to my ship and compressing it at a better rate than stations, sounded like an interesting gameplay role

Any technology distinguishable from magic is insufficiently advanced

Positive feedback is not a god given right. You have to do some good work to earn it first.