Have they said what skills the compact industrial core will use? Is it the same as the current core? Is it a different skill entirely? Dies the new skill have the same reqs?

Just the info I was looking for. Thanks.

I don’t get why this has to be a new skill?

Why wouldn’t it be?

There already is a skill for industrial cores: 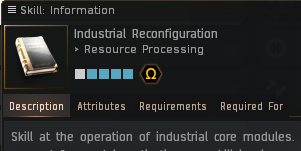 If a new (compact) industrial core is added to the game, wouldn’t it make more sense to require the existing skill?

The new skill is the Cliffs Notes of the existing skill.

If it was just a compact version of the same module yes. But this is a smaller module for a smaller ship. Just like we have different skills for different weapon sizes.

They just changed it to the Indy Reconfig skill. Now an 8x skill and Advanced Mass Production 4 requirement.

Does anyone know the exact day they roll out the new changes. I have heard that they will now roll some of the proposed changes back, I do not know for certain.