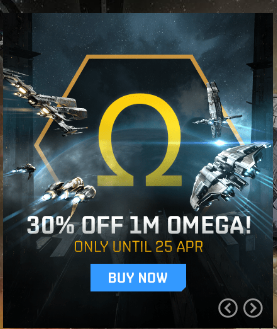 Why would you do a 33% price increase reveal, and while trying to get people on board with that, do a 30% off money grab on the old price.

Price increase with no major new content? Product suicide. When my omega time runs out I will not be keeping my subs, and will be canceled. You cant even get an update right without 3 patches to fix your mistakes. No other MMO charges this much, especially one that encourages MULTIPUL accounts. My 4 accounts this adds another 20 a month… 80 a month for a game? hahaha you are kidding. CCP barely supports the game anymore, they put no thought into and recycle events and the only new one recently was the Dr Who event designed only to generate new players, and not for current or veteran players to enjoy. The game should be cheaper after 19 years, not more expensive. It is obvious CCP is trying to squeeze the last bit o money they can out of the franchise, and this is definitely a good way to kill the game. good job CCP

Next time you increase your prices for anything, heres a tip to not piss off your fan base… give them something extra content wise to warrant the increase, and not shovel the same thing down peoples throats, and expect more for it. I am Isaac and this is my opinion

2 years with nothing but new pay2win packages

and now a 33% price increase for supscription

u must be joking

Nobody here is questioning if it’s a business decision. Everyone recognizes that it is one. People are questioning if it’s a good business decision. The content patches, from what I have read (again, been gone three years and only came back three days ago) have been lackluster and haven’t been actual content, just changes to existing mechanics that have required patches to undo because they hit everyone wrong. People are, understandably, annoyed because this also comes on the heels of the drama surrounding the premade Retriever that was poofed into existence if you paid money for it, crossing a line in the sand that since at least 2010/2011 the playerbase said they would not tolerate. The Summer of Rage came about because CCP refused to answer one simple question: will they sell pay-to-win ammunition or ships in the NEX? The game, at that time, was subscription-only. Here CCP tested the waters and got kicked in the dick for their troubles, and then they make this announcement.

The smart play would have been to either announce it for six months from now to give players time to see if new content comes out and if it’s worth paying the increase. Alternatively, another smart play (though likely not something the playerbase would be overly fond of them doing) would be to wait until after Fanfest, allow the players to digest whatever CCP throws at them, gauge reactions and then make a decision there. Instead, they did this, giving people 25 calendar days to consider it.

What’s more, there’s a section of the announcement that makes it seem like we can expect paid content, meaning you will have to pay a subscription to engage with it. In a game that suffers for new content, this is a bad idea. Even games like Dungeons and Dragons Online manage to put out rather regular content updates. World of Warcraft has multiple content patches per year, as does Elder Scrolls Online. If you were coming back like I am, read up on the development hell that has been the last two years and the complaints of no new content, then saw “We’re increasing sub prices 33%” alongside inflation in real life, you’d be reconsidering the decision to come back and pay for a sub as well.

Also CCP can you give specifics on what you mean by "adding even more value to your Omega subscription. “” as I aint really seeing that

I hear you, but I’m not sure that would really work for EvE. It’s a pretty weird game. The learning curve is ridiculously steep. We mostly like it that way, but not a lot of people do… I kind of think it’s destined to have a relatively small subscriber base no matter what, unless they radically simplify it, which most of its current user base would hate. So I don’t think it is irrational for them to try to get more money out of their current user base. What I do think would be unreasonable would be if they raise prices and still don’t make much new content. I think if they’re going for higher prices, they need to go for more new content too. And they need to be sure that new content is of a kind the bulk of players want.

I thought this might happen… talk about falling onto your own sword!!!

How can you justify putting up the price with no extra content! so thats BYE from me with my 5 Accounts!

Drop the BRM and mining BS you’ve implemented over the last few years and you’ve got a deal. At least give us something for the extra money. Starting to wonder if there’s some kind of strange mineral in the Icelandic waters…

Ok Omega is canceled… will use the rest of my time to have fun in the game and destroy stuff… and then go back to wow or any other MMO that gives new content all 3-4 month… unlike EvE which has 0 new content since I started playing 15 month ago… oh and did i mentioned that ANY other MMO costs 12,99 a month? For more stuff and content than eve has?

Well this is way over the line. It seems like CCP has a huge ego and that we all will hang with this MASSIVE increase in pricing. NO THANKS. This is going to result in me quitting as I can not sustain this increase in my budget. Way to ruin what once was a GREAT game.

It’s a nice dream, but don’t expect them to even make another attempt.

but then why all the character creation with 3D clothes and makeup and…?

19,99 per month for mostly 2D only ships in 3D in space skybox is, sorry but, laughable?

oh and did i mentioned that ANY other MMO costs 12,99 a month?

First: thank you for the stable prince in the past

Someone Said “CCP is just getting to the Industrial standard Price”
Well,

Or just to compare it with a way smaller mmorpg which is really old already too and not a big player like WoW to make it more fair:

Eve just become than 54% above the Industrial Standard…

I have been playing from the end of 2003 put up with all of CCP"s BS but I’m thinking this is just to much.Come on a 30 someting % price hike with no new content? You guys have a good fanfest you might want to check out Iceland"s riot laws before you head over.

I come back to EVE, having fun for about a month and now this.
WELL, TIME TO PLAY X4 FOUNDATIONS. OR WORLD OF WARCRAFT.
I rather deal with a braindead AI than this. Or some braindead raid system. Or anything for that matter! Seriously. No. Nah. Nah. Nah. No inflation in the world excuses that. This is horrendous, pretentious to the community and ridiculous in away that I cannot - and will not laugh about it.

Nah, just nah. Goodbye CCP. Just…nah, not worth the stomach ache. Goodbye. Well. If you rework the entire bloody game maybe I’d stay for that price but…nah, forget about it. You became just as corrupt as the Corporations you have in-game.

The price for a 2 year subscription is only $11.29/month. That actually barely went up at all. They’re now giving us a 44% discount if we commit to 2 years.