Overpromises, underwhelming delivery, raising costs, hammering down on players for being the community you helped cultivate for nearly 20 years, and we’re sitting at a friday night with fewer than 17,000 accounts logged in. How many are Omega? How many are Alpha?
This is what I, and many others have been telling you would happen. Plex is free falling right now, outside of your manipulation of selling plex directly through the eve markets. People are leaving.
I don’t know if you noticed, but in the real world, everything is costing more. You did not justify the increase in pricing, you did not announce anything game changing. You did not even pull through with a real discount for multiple accounts. (lol, coolio, we can pay the same $15 it was before these stupid changes, as long as we pay $20 for one account)
You may think you’ll save eve by rolling everything back to nostalgic 2004, but you gambled wrong. The video game community has been moving from huge time/money sinks for a long while. Games are considered wildly successful if a player spends 100 hours on it before completion. Meanwhile, ancient eve takes months… years…decades to get the skills to fly the ships they heard about from eve history. Not to mention increase price for absolutely everything.
Congrats, scarcity made everything way more expensive. You pushed out producers. Players can only take so much feces being thrown on them before they go elsewhere.
What is your answer to all of this?

What is your answer to all of this?

The same answer that got them to 17k players in prime time (maybe 10k of which are paid):

“If you don’t like the (truly stupid) things we’re doing with the game, EVE may not be for you. Bye.”

Cool story, bro. Can I have your stuff?

They likely aren’t going to really feel it for a year. I know a lot of people who bought a year sub right before the price increase.

That buys them a year of grace… so CCP is now on the clock. They have a year to prove the game is worth the price hike… I wish them luck.

As I’ve said many times before, the current generation of gamers have the attention span of a Pomeranian on crack, and the patience of a toddler. There are literally thousands of other low-rent phone store app games out there for them to play. EVE does not, and has never, catered to the gotta-have-it-now type of player…

The same answer that got them to 17k players in prime time (maybe 10k of which are paid):

17k accounts … if players average 3 accounts thats only about 5k players , doesnt sound quite as impressive does it ?

I don’t think CCP is aware of that. Of anything, really.

in the real world, everything is costing more. You did not justify the increase in pricing

No one justified the increases I am paying for fuel, food and everything else I purchase. I see no reason to hold CCP to a different standard than the rest of the planet.

you see no difference between necessities and luxuries? You’ve already lost then.

This is what I, and many others have been telling you would happen.

You realise that you don’t have to be Nostradamus to predict the results of the changes right? You’re not special in that regard. What if, just hear me out, CCP knew exactly what would happen… and decided to do it anyway.

to me CCP is like the government , the more they do the worst the game gets
you put some ore for people to mine, blueprints for people to build , docks to trade and thats it
OFC im being reductionist
but my point is that the PLAYERS are the content
thats why some dudes mentality is so bad for EVE
no FAKE macguffin would make the game better

if players average 3 accounts thats only about 5k players

Well, it wouldn’t be impressive, no - but none of the data we have suggest players have an average of 3 accounts each, and they certainly don’t average 3 logged-in accounts each.

A guesstimate from various forms of calculation or previously released numbers would peg it at around 10k subbed accounts and 7k Alpha, representing around 12k unique players, and about 6k of those being either AFK/idle or bots.

With somewhere in the range of 220-260k active accounts and 120-150k unique players total. Which is a pretty massive drop from 5-6 years ago and the decline rate is accelerating.

(Note: these are my own personal calculations from various sources, feel free to differ.)

Not yet, but I hope so, I guess I have to be patient, can you give me a timeframe fot it to hit 1 million ISK per PLEX?

No, about 90% of the players quit after two weeks. They realize it’s a chore and they didn’t even clean up their room yet. 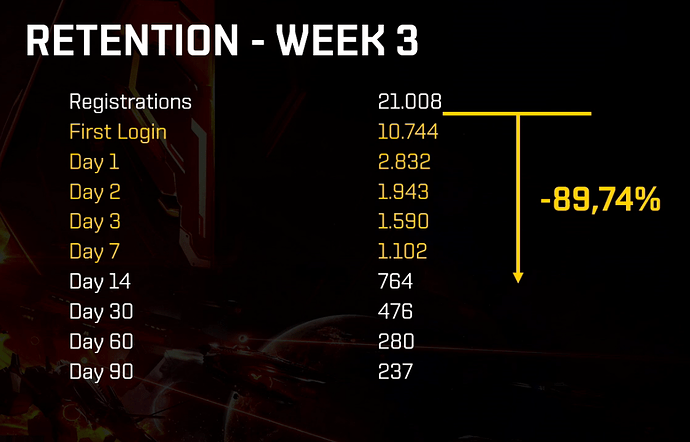 I don’t know if you noticed, but in the real world, everything is costing more.

I don’t know if you noticed but for quite some time you can play EVE Online for free, with limitations to the ships and fitting you can use. I hope the same goes for the things in the real world. If not, prioritize.

What is your answer to all of this?

They are maintaining the server and code, even fixing thing and adding things.
It can be annoying if your gameplay style exceeds your monthly budget. Don’t be sorry, be better.

As I’ve said many times before, the current generation of gamers have the attention span of a Pomeranian on crack, and the patience of a toddler.

This may be true, although personally it sounds like the sort of exaggeration older generations have made about younger generations since Romans were scratching graffiti on stadium walls.

You do realize however that being only 19 years old (less than one ‘generation’), almost every gamer from every generation that ever tried EVE is still out there, gaming? And that the vast majority of all those gamers of every generation have walked away and found better gaming elsewhere?

Because as much as some EVE types like to assume they’re superior gamers with vaster intellect and higher commitment, and “kids these days” can’t hack that… the truth is that CCP has just done a really shitty job of providing acceptable gaming/entertainment value over the years.

There’s a fairly small niche crowd of hard-core EVE types that can’t find what they’re looking for elsewhere, and that’s really all that’s holding EVE together. CCP is aware of this and has no clue on how to change it, so instead they’re just doubling down and milking that hard core for all they’re worth.

you see no difference between necessities and luxuries?

Nothing in my comment implied that, but I’ll go with your argument anyway….

Why is it you feel that CCP, or anyone else that provides a luxury should be required to justify a price increase to the consumer while at the same time you exempt Shell Oil, Tyson Foods and Del Monte from the same requirement?

if players average 3 accounts thats only about 5k players

Given those figures average 2 accounts then , still think it might be more but regardless Ive often thought the population is somewhat a mirage . In other words EVE is perhaps not as popular as you would imagine given the server population figures .

Because as much as some EVE types like to assume they’re superior gamers with vaster intellect and higher commitment, and “kids these days” can’t hack that

I don’t have to assume anything. I see it every single day in Rookie Help chat. There are five year olds with greater intellect. Whenever a new player asks a question or needs help, one of the first things we ask them is if they did the tutorial or the career agents. Most of the time the answer to both of those questions is “no”. The new generation of gamers don’t want to have to figure things out or put forth any amount of effort on their part. They want to be able to have everything right now and for zero effort.

Another question that gets asked about 1,000 times a day is “what’s the fastest way to make ISK?”. That’s all they care about. They don’t want to know about gameplay mechanics or anything else, just how they can get a billion ISK and millions of SP on day 1. Unfortunately, the future of EVE lies with these “instant everything” “ooh look a shiny button” brain-dead mobile game players…

I log in and kill stuff every day. And then they send me hatemail that I share with my friends.

EVE is the best game ever.

Not yet, but I hope so, I guess I have to be patient, can you give me a timeframe fot it to hit 1 million ISK per PLEX?

For one, I am not exempting anyone. Stop assuming you know me. You don’t.
Second; EVE online is a video game that people choose to invest time and money in. It’s not necessary for survival. By. Any. Means.
Nothing in your comment implied that you don’t know the difference between necessities and luxuries, yet you still argue from the point of equality between luxuries and necessities. Get Real.