The answer to your original main question is “yes”. The reason,of course, it adds to their (CCP) bottom line. The next important question to ask is whether they are going to crack down on the bots or is Tranquility going to go off the same cliff the China server did earlier?

So far CCP has failed to have any significant enforcement program in the last 3+ years in regards to bots; I doubt we’ll see any response/action soon from the security group ( who must be down to only a couple of people by now based on CCP’s track record). Combined with RMT transactions, EVE is currently on a steadily increasing slippery slope into oblivion.

I agree, it appears botting is good for CCP, because inflation drives up the price of plex, making it not only harder to plex with ISK, but makes the plex to ISK conversion more valuable for someone willing to buy it with real money.

Big Alliances win, because they are getting a massive amount of ISK sent their way in rent from the botters. Some of them may even dabble in RMT themselves. And the botters win, since they can sell the ISK for real money.

Don’t you see? It’s win-win for everyone! Well… everyone that really matters. /s

“Big Alliances win, because they are getting a massive amount of ISK sent their way in rent from the botters. Some of them may even dabble in RMT themselves. And the botters win, since they can sell the ISK for real money.”

big/Rental allainces don’t win , its completely binary. Its you can afford the rent of the system or you can’t . anything past the rental price doesn’t go to the big/rental alliance . Big corporations would be the only winner sine they get a % of the isk generated

If the botting corps were gone, who would take their place and pay rent?

I look forward to the results of said Summit concerning to the bots. When can we expect a concise answer from the discussion?

About that space trash. Can we have their stuff? 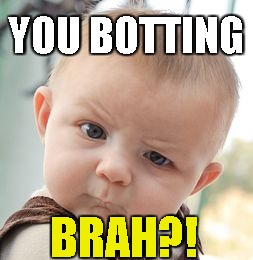 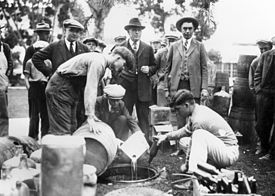 Bootleggers and Baptists is a concept put forth by regulatory economist Bruce Yandle, derived from the observation that regulations are supported both by groups that want the ostensible purpose of the regulation, and by groups that profit from undermining that purpose. For much of the 20th century, Baptists and other evangelical Christians were prominent in political activism for Sunday closing laws restricting the sale of alcohol. Bootleggers sold alcohol illegally, and got more business if leg...

There are renter corps throughout eve , in a number of different rental alliances. Are you asking why all the space hasn’t been sucked up by these people ? Cloak campers , burn out , constant pvp gangs , full scale invasion, better deals , change of scenery, loss of key members, logistics getting camped, bad land lords, land lords retaking their space for XXXXX., rental price hikes, bad i-hub upgrades and location,location,location. That’s just off the top of my head on why some of these places were unrented or the renters left.

@Wanda_Fayne I’m not sure but I suspect there are Charon freighter bots operating in the Jita to Amarr trade corridor.

They are all 2-3mo npc toons, piloting Charons, and they use autopilot. It maybe be 20 accounts with a player running them, nor may not be.

Character name is Aronin X, where X is the a load of various names like Aronin Bilbo, Aronin Blood etc (use the character finder in game).

If I was a freighter pilot, I sure as hell wouldn’t autopilot through Niarja.

Just some hopefully interesting info, but harder to deal with, as you’d need 16 odd cats… CODE can you help?

I often see freighters on autopilot but I generally assume they are currently empty and therefore “safer” from ganks. If a bot has any complexity at all it would probably warp to 0 instead of use autopilot. And freighters in npc corps is not at all unexpected, a very large number of players create alts for the purpose of highsec hauling, I’m training one into a DST right now.

But if you are saying that there are genuinely 20 freighters being multiboxed by one person then I am curious what hes trading in such high volume.

But if you are saying that there are genuinely 20 freighters being multiboxed by one person then I am curious what hes trading in such high volume.

There are 20 characters named Aronin… and I’ve seen up to 8 being piloted concurrently in convoy. I might start scanning them myself to see what they are moving. I expect some do end up being ganked but I’ve not spotted it happen.

I love your suggestion about, " … random errors or malfunctions that can’t be scripted out will require human input at random intervals … Course drift … autopilot too long, or particle energy storms or something can disrupt auto navigation landing you somewhere you didn’t intend …". sounds good to me. And it adds a degree of realism back into the game too.

“Traveling through hyperspace ain’t like dusting crops, boy! Without precise calculations, we could fly right through a star or bounce too close to a supernova and that’d end your trip real quick, wouldn’t it?”

Well if Bots would be a banable offense, botters would not die on their way back to set up their operation again, after being exposed.

They would get banned and most certainly not just keep on botting again.

Same dude bringing back a pod in order to start the botting again.
Clearly shows that the security team is more engaged in escorting the community team out instead of fighting bots and RMT.

There are 20 characters named Aronin… and I’ve seen up to 8 being piloted concurrently in convoy. I might start scanning them myself to see what they are moving. I expect some do end up being ganked but I’ve not spotted it happen.

Lots of kills on KB, smartly under 1B in cargo each time. Mostly heavy water and not packaged.

You may be right or not, but I would have a difficult time proving this is botting and not just someone autopiloting. Multiboxing a freighter convoy isn’t that difficult and ‘herding’ will increase the chance of success. If you factor in some ‘acceptable’ losses.

Bot accounts are something kind of rare in Eve these days: They are a paying account.
There is a reason that a few years ago CCP stopped publishing how many accounts they had.

Well you can publish numbers as long and as big as you want, if the same botter keep on botting it just indicates that the numbers are just lies.

Those of you who’re concerned about botting, both here and over on /r/eve where I’ll also be posting this message, are 100% right. It’s an absolute plague, and it’s something that every MMO feels the wrath of. People who bot don’t give a ■■■■ about the game, they just want either a fast way to accrue wealth and cool stuff, or they’re looking for an easy way to build the resources to RMT.

Regardless of their motives, it’s to the detriment of the game and it needs to be stamped out. It’s garbage behavior, it’s against the rules, and it’s something that has a magnified effect in EVE because of the single shard nature of the game, the economy, and the fact that everything on the market is player built or sourced.

Are we doing enough at this stage to combat it? No, I don’t think we are, despite the fact that our Security Team are doing a rock solid job and are working flat out to combat these kinds of issues. I also don’t think it’s acceptable that it’s making our pilots feel like their efforts are diminished, and neither do our security guys.

We discussed this both internally and with the CSM today over the course of several sessions, given that it’s a recurring theme that keeps coming up. We’re looking to change things in the coming weeks and months, and to see some more concrete action on RMT and botting.

I’ve also taken this to the leadership of the EVE Dev Team too, throughout December and January, in the regular meetings that I have with them. I’ll continue to do so, and I’ll continue to keep it a top priority until it’s addressed.

However, that’s going to take a little bit of time.

Over the course of the weekend, CCP Peligro and CCP Grimmi have been doing Bob’s work, and have taken out just under a thousand accounts that were complicit in botting. They’ll continue to kick the ■■■■ out of as many more as they can going forward.

There’s the undertone in this thread that we don’t care about botting because it brings in revenue. To be frank, that’s entirely wrong. We lose far more than we gain when the ISK and assets generated from botting go to the scumbags who’re RMTing it on third party sites.

What’s more troubling for me though, is when it gets used illegitimately to fund wars for corps and alliances that leave their adversaries who play by the rules on the back foot, at a disadvantage and demoralized. There’s few things more that annoy me in EVE than people who aren’t playing by the few basic rules that we do have.

I don’t really have much more of an update for now, we’re still exploring ways to tackle this effectively and I’m not going to ■■■■■■■■ you guys. Just wanted to post here and make sure that you were aware that this is something that’s firmly on our radar.

I spoke about more concrete action against it, and that’s something we’re exploring right now. There’s a lot of things to consider in terms of how to tackle a problem like this and it’s not just as simple as “ban everyone who looks like a bot”, because that ends up with a lot of false positives, which results in false economy.

For sure though, I want you all to know that this is something that’s top of the list, and that I’m working closely with our security guys (CCP Peligro and CCP Grimmi, who’re pretty vicious with this stuff) to make sure that we can effectively stamp it out.

We’re going to focus on getting through the CSM Summit this week, then we’ll have an update for you guys as soon as we can.