I’ve had an error on one of my PCs that says that direct x11 is not detected. I have direct x12 so I’m not sure why this error is popping up. 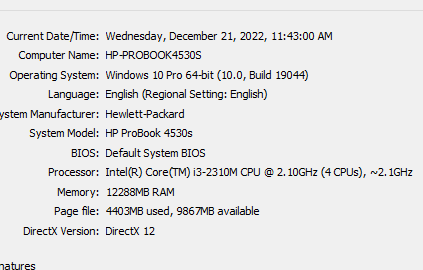 How do I fix this?

The HP Probook 4530s is an elderly notebook that uses a Intel HD3000 graphics chip. This chip only supports Directx 10.1.
Intel has not released a driver capable of anything beyond that. They also haven’t released a Windows 10 driver.

While Windows 10 will run on the Notebook there is no driver for the graphics chip. Windows uses its own generic driver which reports Directx 12 since it can process the API on the CPU (software rendering). A manufacturer’s driver for a Graphics Card/Chipset will push Directx calls directly to the dedicated hardware (hardware rendering).

I suspect Eve, being graphically intensive, is making a Directx request for hardware rendering. The Windows generic driver replies that it can’t do that. Eve this gives an error.

It will handle Eve Anywhere - that’s Omega only or paid by PLEX if you are Alpha.

The other alternative is GeForce Now - another streaming service that runs in a browser and supports Eve Online. There is a free tier for it as I recall.

AAAH ok thanks… I was hoping to be able to run two omegas and an alpha clone for gas-huffing lul.

Update: Eve anywhere doesn’t work on my ProBook because the wifi card is too slow. I can only do 10mbps whilst eve anywhere requires 25mbps. Sad times

Update: Eve anywhere doesn’t work on my ProBook because the wifi card is too slow. I can only do 10mbps whilst eve anywhere requires 25mbps. Sad times

Does it support a USB WiFi connection? though that may depend on the performance of the USB ports - the spec for you Notebook does mention USB 3.0 and that should support a fast device.

You can’t run an Alpha clone alongside any other Account, Omega or Alpha - EULA.