I have bought a not-so-new computer, and installed windows 10 64 bits on it. I tried installing EVE on it, but it says I can’t launch the installer because I don’t have directx11. I have directx12. Is there a workaround to this issue?

Thank you very much for any help you might give me!!!

The Microsoft DirectX® End-User Runtime installs a number of runtime libraries from the legacy DirectX SDK for some games that use D3DX9, D3DX10, D3DX11, XAudio 2.7, XInput 1.3, XACT, and/or Managed DirectX 1.1. Note that this package does not modify...

@Geo_Eclipse_Oksaras Where do I find that? (Microsoft doesn’t seem to have it anymore)

@Small_Kitty_Paws Thank you very much. I believe that I did install that package that includes legacy directX libraries. However a popup banner comes in and says i’m still missing directX11. how do I circumvent that?

Have you tried running Eve in Windows 8 compatibility mode? (It helps for some games that require DX11, but I’m not sure if it will help for Eve.)

@Geo_Eclipse_Oksaras I think there is some confusion about what I meant. In Windows 10 you can choose to run programs in compatibility mode. The program will ‘think’ it is running in another version of Windows - with DX11.

I don’t know if it will help the opening poster. But at least it is one more suggestion to try. And the nice thing is - he can try it without installing/re-installing any software. 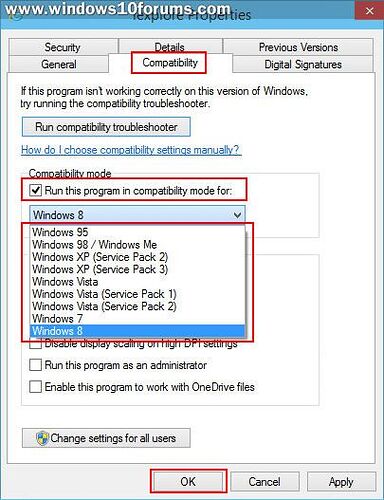 ah forgive me… im not a “techie” so a lot of stuff like that, i honestly don’t know… so i apologize… i know human anatomy… thats about it

No worries. It is all good

Need to know what GPU you are running as I expect thats the actual issue, not the installation.

Will show you what you have for hardware and DX version

Edit : DirectX 12 is built into Windows 10, it cannot be installed separately, nor could it be uninstalled. By having the current version of Windows 10 installed you have the capability of running (DirectX 9.0, DirectX 10.0, DirectX 11, and DirectX 12) software.

Not my words, found it on the internets, but it seems legit to me, I have never had to separately install DX11

Hello again and thanks to all those who intervened to help.

@EM00 I tried running EVE in Win8 compatibility mode: I still get the same thing.

This is my sys as per dxdiag:

Sitting in the blob above is the GPU chipset information.
In this case an Intel G45/G43 device. The specification for this chipset is it supports up to, and including Direct3D v10. This is Directx 10, not 11.

Simply the hardware can not support the Directx 11 calls regardless of the operating system support.

It’s new graphics card time - it doesn’t need to be a top line expensive thing. But it does need to support Direct3D v11 calls as part of Directx11 or better.

Alright, so basically the videocard is too crappy to run directx11, thefore to run Eve, correct?

It doesn’t support DX11, so yes, it will never run EVE since it runs DX10 and CCP has never supported DX10

grab a new card and you’re on your way.

Sadly it won’t happen on this computer, it’s an all-in-one. Not happening anytime soon then

Thanks y’all for the support!

damn, that sucks dude… this is why my friend who does computers etc, always tells me to never get an all in one… that and its a pain in the butt to really do anything with them.

I know I know. This is not even my computer, it’s my wife’s. Well, next time I guess!