I’d concur, most important people to know would be heads of state / pirate entities like Omir or Kuvakei, and state reps in CONCORD Inncer Circle. Those people are the ones that come up most commonly in news or other media.

I think that’s entirely correct too.

Thanks everyone! I appreciate the comments!

I see that I have a lot of reading to do in the EVE fanfic world. I will have to make time in the near future to really do a deep dive.

Luckily, my core characters are rooted in a common origin story that hinges on them not really knowing much about the EVE world around them. So in the mean time I can draft up short stories about them that don’t require lots of references to important people for now…

But still, it will have to work towards integrating well known people and locations etc, over the long term.

I wonder if y’all could help by sharing your top three interesting or note worthy Pople and Locations of EVE lore?

As a new player, I’ve seen a lot of places and people referenced, but in practical terms the in game places I know personally are limited to my station of origin and the immediate zones around that, Jita (yes I’ve set up my “ship outfitting HQ” in a public station there despite all warnings and the fact that none of my characters have completed the basic missions yet), and the region where the Corporation I joined has one of its main stations.

Other than those places,and the zones along those routes, I don’t really know any of the “notable” places in EVE yet.

May I suggest a new thread for the above? I feel it deserves wider base for answers than who reads this thread this far

If nobody beats me to it, I can try to make some kind of “notable locations and VIPs” thread later in the evening.

Added in this bit in the light of the new info on Minmatar attitudes to cloning and an existing bit on the Amarr. Afaik there’s no lore on Gallente / Caldari re this?

Some of these are explained by cultural values. There are many Minmatar who believe that only (one copy of) one body and one mind may exist at any one time.

[—] philosophy of those who believe that only one living body and one living spirit, or mind, may exist at any one time. Within this tradition there exists a school of thought that believes it is acceptable to assist a spirit in crossing from a dying body to a new living body

Amarrians have a ‘sacred flesh’ tradition that makes many frown on cloning, even though a recent exhortations by Empress Catiz and the Theology Council indeed confirm capsuleers are considered fully human.

The Amarr have a mixed view on cloning, with the doctrine of Sacred Flesh prohibiting it for royalty. Many members of the clergy and nobility also adhere to the ideals of Sacred Flesh, though violation of it among these segments of society is not considered a religious crime as it is among royals. However, cloning has gained more and more acceptance among the Amarr in recent decades, especially with the rise of capsuleers. Some theologians contend that the soul transmigrates into a new body upon cloning, while others claim that clones are nothing more than soulless shells. (From Death)

As the faithful will know, this Exhortation by the Theology Council contained the judgment that cloned humans should be accepted as embodying souls in communion with the Imperial Rite. (See links above)

back up only key personnel

The lore says “most military personnel who serve as crew onboard vessels belonging to the various navies of New Eden”, though. You’d have to assume most crew on navy ships are in fact civilian for this to fit?

This brings up another question, silly perhaps, or way to subtle… but I am asking these questions specifically to gather a random assortment of player feedback that I can synthesize and incorporate into my writing…

But my first impression was that most ships, even most larger ships are flown primarily by the PodPilot, and that few have much of crew. But I also have seen some references to ships officers and crew reactions and debate about their health and clone access…

In your opinion, what’s the average crew size for the basic ship classes? Just trying to get an idea of what people imagine, so that I can tinker and extrapolate…

Someone suggested starting a new thread for the notable places question and it made me realize that I should not hijack threads to mine for my curiosity and world building fodder. I should create my own threads featuring the big questions I have to cast a wide net on the Fiction Portal forum.

Thanks for all the feed back and inspiration!
I look forward to more conversations like this on this board as I mine and develop more ingredients for my fanfic world building

In your opinion, what’s the average crew size for the basic ship classes? Just trying to get an idea of what people imagine, so that I can tinker and extrapolate…

The old wiki had crew guidelines, and I don’t think it has been disowned by CCP, even if the information is a bit old.

And hey man, don’t worry, ask away. I at least enjoy answering questions, because usually then I get to check and update my knowledge on things.

Thank you kindly for that very useful link! Sorry for taking forever to reply

There was a time when I had a percentage calculator decide for me how much of my crew may have gotten to escape pods and survived based on the New Eden Crew Guidelines. Such as getting roflstomped in seconds by a tank fleet I assumed my Domi’s crew was a 100% loss but a drawn out slugfest against Federal Intelligence I assumed about 30% survived and were taken into custody for ahem being accomplices to domestic terrorism.

Clarified a bit in the OP to state that the process of soft-cloning (ie, whether non-lethal scans exist or if backups are always copies of lethal scans and thus clones-only) is not in fact described in lore proper, but “only” on Reddit but a storydev at the time.

Lore in fact states non-lethal scans do not yet exist, in Death:

Cloning outside of a capsule is also possible, although the associated risks remain pretty much the same: The brain is scanned - and thereby ruined - and its contents transferred to a receiving station that instantaneously awakens the consciousness in a new clone. This can be done only under laboratory conditions, although technology in the area is progressing quite rapidly. The possibility looms that cloning may at some point take place outside the strictures of a capsule or a similar machine, though it’s considered unlikely that it will ever be anything other than instantaneous.

Good news, everyone! Technical developments in YC122 has made life onboard safer (but still not 100% safe!) for our crew members. 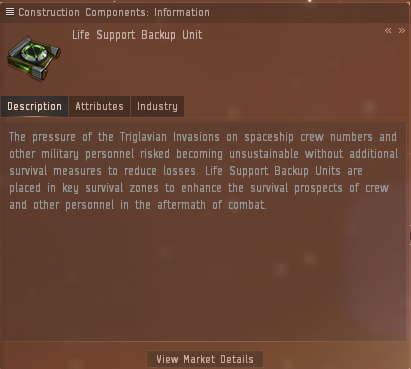 Can crew skills and boarding parties be far behind lol!?

Similarly, most some military personnel who serve as crew onboard vessels belonging to the various navies of New Eden are mandated to fly with a basic clone that is backed up every three months at the end of their service rotation.

The above edit was just made to the Capsule article on the new EVE Universe lore portal (which is amazing, btw). This removes some existing ambiguity in the lore about “if people can be that easily cloned, why isn’t everyone”. I’ll update the FAQ itself on this Real Soon Now.

(for the Military, it makes sense. Because training a soldier costs a bunch of money.)

Now that it’s “some”, not “most”, that works perfectly. It could also be compatibility - we know there’s genetic and psychological components to who can be cloned. Imagine being denied promotion because key personnel need to be clone-compatible to not waste training…