@ACreatorPT Turns out it is a little more complex than I had imagined due to how I share information between sections. I tried to add it to the 5.2.1 release, but I am going to have to push it back to 5.3.0 since it will require a little more work.

@Rotsner_Deja Nooooes. My way of life xD my poor isk supplies are pretty much vanishing

hopefully you will get it sorted soon

otherwise im screwed to plex my accounts this month :S

and once again thanks for doing god’s work. ill just keep rechecking everyday

TD;DR: thx for the update and work

hope to get it when u can

@ACreatorPT I do have the day off tomorrow so I might try to work at it again. I have an idea for another feature I want to get in sooner rather than later as well so it might force me to do both.

I have the website https://dev.evetrade.space up as well if you want to look at the experimental site. I typically test out any features for a at least half a day or so here before I take them live. (note: the SSL token is not signed so you will need to accept the risks and continue to the webpage).

If I am super productive, then who knows? It might be birthday gift after all.

Unfortunately didn’t have time today. Its on my todo so you’ll see it in the next update in the next few weeks.

@ACreatorPT and @Cowboy_Arnerette
I know. I have both of your tickets at the top of my v5.3.0 backlog (see attached). Unfortunately as a freelancer / government contractor my life swings in terms of work load. This is a priority when I have downtime. I will get to them both as soon as possible.

I will keep you posted and tag you when they are released. 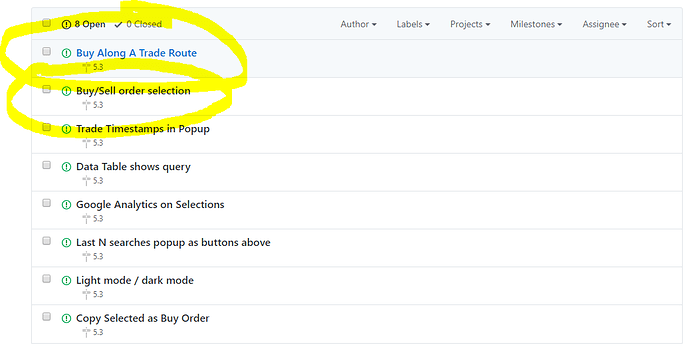 I just found your site. It looks very sweet!

@Rotsner_Deja no… atm in your tool when u select station to station it compares the prices of the sale order (and the buy station) VS the prices of BUY orders (at the sell stations). i want it to be able to compare SELL orders VS SELL orders. Idealy this would go farther and allow me to select what orders to compare from each station ( buy vs buy, sell vs sell, buy vs sell and sell vs buy).

just have a ticker next to the station to chose buy or sell orders.

Yeah, I’ve been looking for something like this as well. +1

You are still working on project?

Is it possible to have search to trade to anywhere? For instance let’s say I want my starting region to be The Forge but I am willing to take goods anywhere for trade? The other features should allow for me to limit it to high sec or high sec and low sec only, or even high/low/null. Is this possible?

I finally found some downtime in the last month (I’ve been traveling for the better part of the last year so I haven’t been able to get to any of the feature requests). I’m working on the following two tasks:

I am hoping to have both of these done in the next 30-days. Apologies for the delay. My life has been quite hectic. Hopefully this will enable greater collaboration and more timely feature releases.

If you would like to follow the progress I have a dev branch of the code up here: https://dev.evetrade.space – currently I have only wrapped up on the second task. Hoping to get to the first one in the next week or so which will allow me to test it for a week and take it live in early Feb.

As for @Nacl_Kanine this task is quite computationally heavy. It is something I’ve been given requests for, but in my experience these queries take too long and if I store this information it becomes stale too quickly. Most of the time deals are snapped up too quickly for a user to travel outside of their region to buy them.

I am working on some last minute changes checks and changes and then Ill be moving it to the live website.