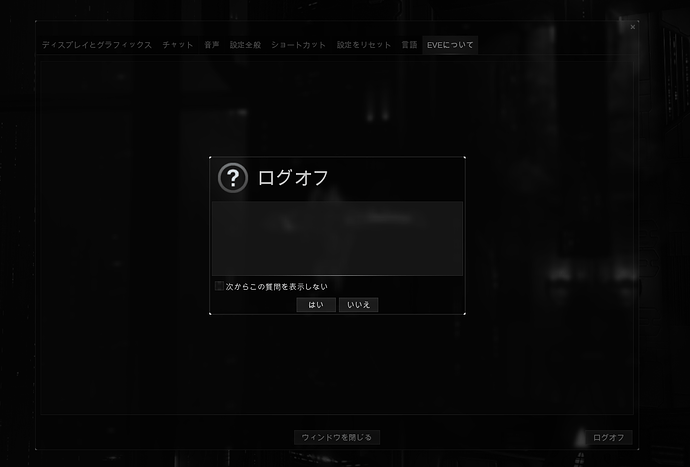 image.png1140×772 101 KB
Good evening. I installed EVE today and amazingly it simply installed and ran beautifully. However, theres a problem with some dialogues. I’ve included a picture with the “About EVE” and “Log off” dialogues that are missing text when the client is set to japanese language. I’ve tried changing back to english, and the text appear normally. The launcher’s language drop-down also only shows rectangles where it should presumably say 日本語.

I’ve tried installing the japanese fonts with winetricks and tried launching the launcher with LANG=“ja_JP.UTF8”, but to no avail. It’s obviously a japanese font issue, but how do I guide EVE to the right font?

Thank you in advance.

I know very little about Japanese fonts, so I have to guess here. It could be it’s trying to find a common Japanese system font and fails to find it. This font would have to be the Japanese equivalent to the MS Arial font, only of course it wouldn’t be Arial but a MS system font, which is frequently used in a Japanese language environment. If you can find this font and install it then it might already solve it.

I tried installing all the Japanese fonts there were in the Arch repos, but the problem still persists. I’m wondering if EVE is looking for a certain Windows specific font?

Edit: I used the dev provided launcher instead and 日本語 is displayed properly in the menu! Can’t test in game as the servers are down, but I assume it works now as well.

Edit2: Well, the game no longer launches with the dev provied package with something about “Could not get default pem root certs”, but perhaps that’s for a separate topic.

Edit4: SUCCESS, at last. I installed the AUR package, hunted down the wineprefix it created and force installed the Meiryo font with winetricks. Then after that I had to rename the font file meiryo.ttc to msgothic.ttc as this page mentioned it is the font EVE is after, and FINALLY the dialogue text started appearing.