EveSkillboard will be shutting down January 2022. Like most Eve Devs I no longer play Eve and do not wish to prolong support. It has been a wild ride, and I want to thank everyone for supporting my site in the years it has served the community.

Squizz does offer skillq.net that allows you to publicly share skills via url.

If any other alternatives pop up by Jan 1 I will share them here.

Maybe many of the people here dont know me, i am the owner of esiknife.com, a tool to evaluate characters, and no affiliate to ant group as goons, brave, horde et al. The problem is us need the option evskillboard do to Plan characters and sell characters.

With these news, i plan to do an option to the current eveskillboard.com, in esiknife.com with subdirectory. Example :

I bought and sell dozens maybe few hundreds of characters but dont use this char to do so.

For an alternative We need :

I plan to have a demo sunday.

We at the United Standings Improvement Agency relied mostly on skills and the standings page mostly for running our services.

we would greatly appreciate it.

Ok, i go to work in that. check this: 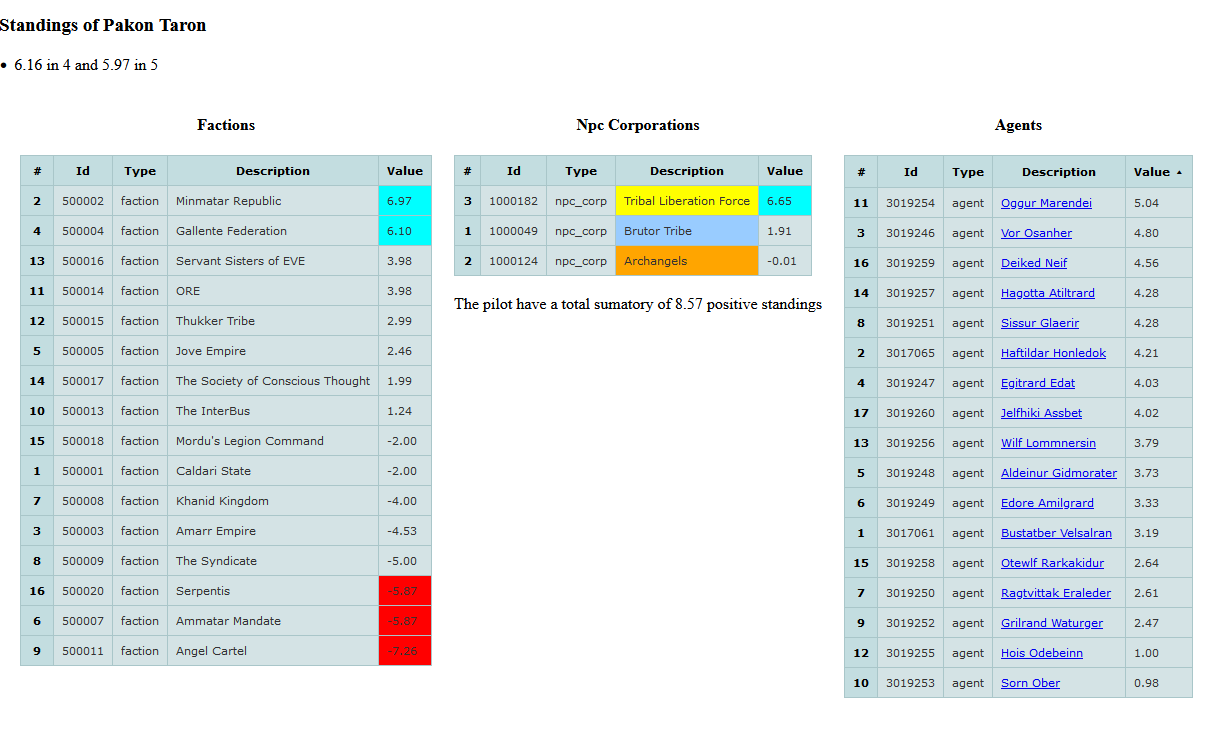 is an example of the standings i have . This character was me, and i sell it.

As Far I know yes, because i purchase him some months ago. Exits a great site called esiknife.com, and in a section of the character can see what agents have reputation, and i take a moment to check what corporation are, and this pilot have onlky reputation with brutor tribe and tribal liberation , THESE REPUTATIONS ARE WITHOUT CONNECTIONS [pakon] i paste the agents name, check yourself Oggur Marendei 5.04 3019246 agent Vor Osanher 4.80 3019259 agent Deiked Neif 4.56 3019257 agent Hagotta A…

I like it… I’d like to invite you to our discord discord.unitedstandings.org so some more senior staff and our esteemed leader can chat with you

Yeah, i enter tomorrow. Have other things to do before.

hey man, thanks for all your years of service and help!

Any interest in handing it off to an experienced IT person?

Any interest in handing it off to an experienced IT person

Not at this time. Thanks for the offer

I am working in get parity of features with eveskillboard.com is work in progress currently.

Some Things to do (not in order):

at the moment you can see the example in https://esiknife.com/pilot/

Is work in progress !

Can i request this thread pinned for the importance ?

I’ve been using eveskillboard for years, you have left a major impact in the ease of access when helping new players sort out what they can do with their skills. I genuinely appreciate that you’ve been willing to support this site for so long, and I hope you’re enjoying what you’ve moved on to. Thank you for your insane contributions to this game!

DIsclaimer of a current problem:

The last days, yesterdat and today wednesday, i am blocked for make experiments using my Own CURRENT normal application. Problem is i cant change to other accounts two or three times without get a CAPTCHA to resolve. Its happening now with the forum here too. I have One character in sell, sold yesterday and changing between the two accounts for forum warnings give me the same problem.

I am with many problems of lost time, lost of flow and if this persist i release instead a part of code. Have not sense to FIGHT with the captchas for a ) changing of accounts in forums for bump the sale in bazaar b ) cant change with an already authorized application for testing losing ten to 15 minutes per hour resolving captchas.

If the problem persist i go to publish part of the code instead.

if you are selling a character, you lose access to it until it’s transferred to the new owner.

No, my problem is changing BETWEEN accounts to bump threads or sell, or get the characters for the indicators(and experiments for the board). this is a NEW problem.

i am current 27 acciounts and never problem, begin yesterday. The problem is in the characters i own, not in the ones i sell, and get the problem changing accounts. I need test in various browsers too. Is an account problem, not characters sold problem

I am not asking help. I dont go to fight with developers // CCP , maybe not develope more to CCP as hobby, only problems and changing / ad documented problems, in a game all stick no carrot. In esi too.

I can Log, but no sense to do captchas in development. This was similar of an old employer i had (2008) who ask me to try and download linux distributions and later restrict my download capacity , block ports and cant update firefox and antivirus, Is my nature as developer download distros if was my comission, and captchas in a test broke my flow of work. Is a developer problem.

My 27 accounts are many of one only char, have six chars to sold before the year finished, but look as a waste of time for a ) changes without notice (no captchas, the v4 or v5, i already was v5) and some similar things.

Without Eveskillboard no sells. Maybe is an error try to help CCP, they must do themselves.

Sad to see this site is shutting down, it was easy to use, very helpful and filled an important role after Chribba shut down his site.

Thank you for providing this service, it was definitely appreciated…

an offer has be made but depends on 101 things

Appreciate the words. There is however some complications when it comes to “taking over the site”

The developer keys are tied to my eve account as are all the tokens. As such transferring it means I would have to share my keys which is weird.
2nd people have trusted me as the owner with their data so just handing that all to someone also seems inappropriate
3rd is I consider this site a part of my legacy and I do not wish to hand it off to another name.

I have released the major parts of the code publicly for others to use or learn from.