Exploration: How to take Scanning to Next Level on Day 1

As a new player do you want to make millions of ISK risk free and have fun learning the map doing it? Want advice from a new player on how to get there your first day?

My goal in this thread is to talk a little about my experience as a new pilot, and how you can pop million isk sites with 32,000 isk of probes and a piece of junk tutorial scan-ship. I promise you, the thread may seem long, but it’s not overwhelming, and you CAN figure this out in a day.

First, about me: I haven’t played EVE since 2008, so I’m a newbie like you! (Assuming that’s why you’re in the New Citizens’ Board).

I wasn’t sure what I would “fall in love with” in getting back to EVE, I just knew I wanted to get back into the game. So my first piece of advice is there’s a lot of great tutorials out there, but this is the best one (let me see if I can link it here.) Alpha to Omega Wormhole Tutorial

Now don’t worry, you won’t be exploring Wormholes, unless you want to, I found that while I could crack the sites there (capsuleers call it popping sites, but I think of it like cracking a safe), all the sites were hostile. And it’s not a good use of time to find hostile sites when you’re flying in an unarmed T1 scanner.

Why is that video so good? I watched HOURS of videos, what’s great about that one is it’s everything you need to know. How to generally avoid gate camps, how to avoid being scanned and found while you’re working in a hostile system. So, on to my bit of advice!

K - into the meat and potatoes. Things to understand about scanning. What actually is scanning? Without getting into too much detail, and just sort of feeling it out myself, scanning seems to be like a lock-picking minigame where you have to find the right combination to narrow in on the “solution”.

Pro-Tip: 100% of all tutorials I found only “bruteforce” the lock. I see that advanced players talk about what’s to follow, but I have found no tutorials on it or why it’s a thing. Basically if my scan probes, ship bonuses, level bonuses, are overpowered, I can scan anything low level without any effort. This is NOT a thread about buying sister probes and bruteforcing the “lock”.

Why do I associate it with that? Because I have demonstrated to myself that different PARTS of the scan require different tactics, that brings us to the next part everyone should figure out.

Your probes can be customized using shift, alt, or cntrl, and that this affects the scan.

There are default formations, so what are those first?:

Changing the shape of pinpoint is where your bread and butter will be, my customs fit into three categories so far, each has a purpose tailor made to working on the percentages of the site. Because these are shapes, notice the difference of the shapes, I’ll eventually post some pics on what positions to move the probes for each custom formation.

Figure 1a: Properly fitted pinpoint scan for comparison. This shows how “loose” and therefore weak the signal strength is in pinpoint configuration. 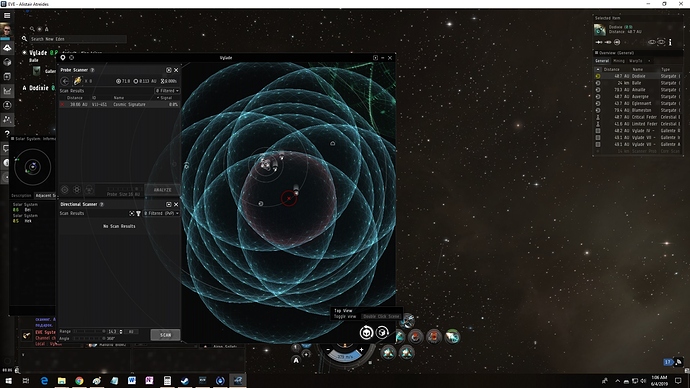 Figure 1b: A 16.9% anomaly about to pop in one scan, notice the near perfect circle the scan forms, notice the shape is no longer a five petal flower but something closer to a Celtic Trinity. This scan is also flat, I’ll get to that in a second. 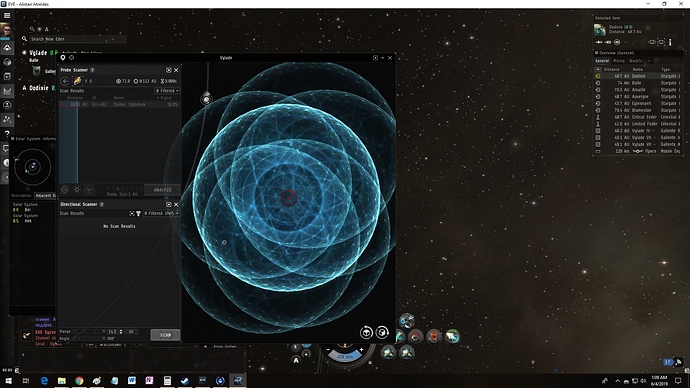 Figure 1c: The end result, a wormhole, not particularly hard to scan, but these are probe I’s and you’ll find that popping a wormhole with regular pinpoint does take more steps at such a weak scanning power unless you customize. 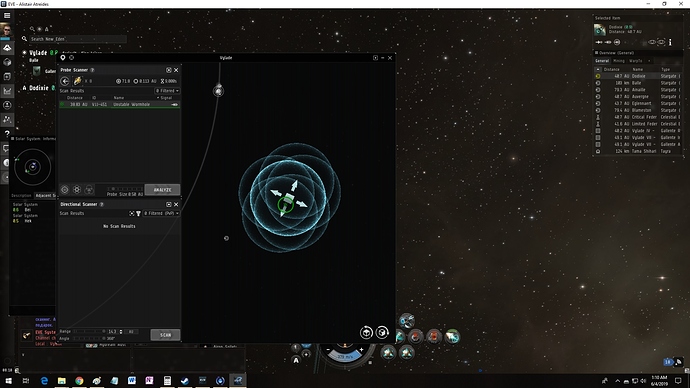 Figure2a: Here we see the flattened scan shape, notice I’ve moved my probes to a horizontal plane instead of the two being above and below center, and I’ve stretched out the probes so that their fields overlap such to create that elongated discus shape in the center. This shape can be used to “fit” the red circles you sometimes pop-up. But despite if you see a red circle or not, using this shape around 10%-20% will have generally good results during the condition when using Triangulation (pinpoint) around that percentage causes you to LOSE the site (get weaker %). That condition (it’s a deviation wall) is why you can’t get passed the 10% often at higher levels with Probe I’s and default formations. 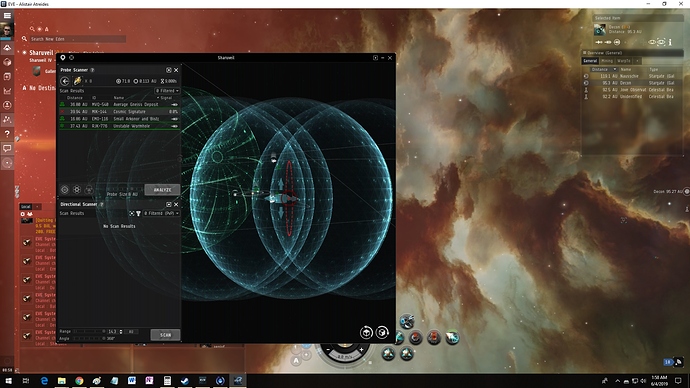 Figure 3a: Here the 0% was eventually popped, this line scan was the “first crack”. After a moment I was able to get the percentage high enough to use triangulation. 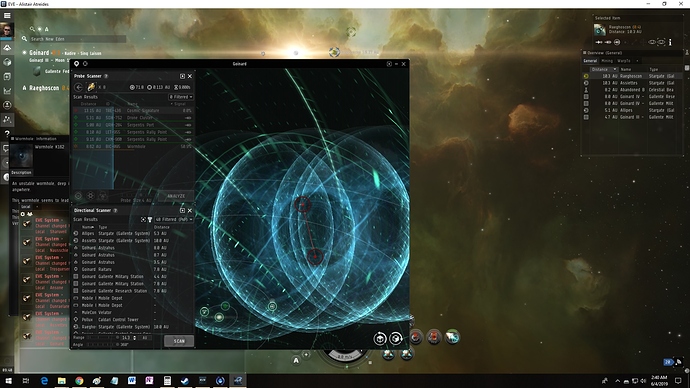 K now that you’ve seen some basic “shapes”, I do promise I’ll show the actual formation configuration at some point.

Moving passed that, let’s put it all together so you can pop Level III+ sites in 15 minutes using Probe I’s.

Pro-Tip: Why this matters? Because many sites are close to the ecliptic and so a flatter scan will deliver more power to where the site most-like will be.

So let’s put it all together.

As a new pilot, the game is overwhelming, but exploration is an easy way to get into it and get isk for buying more things. You now have an idea of what scanning entails.

The only shapes you are given are “pinpoint” and “sweep”, and sweep is near useless to you. And pinpoint is NOT optimized. Pinpoint might allow you to get a wormhole in 4-5 ping sweeps, but you can literally pop a wormhole in 2 sweeps with Probe I’s if you just optimize your pinpoint to a “Triangulator”.

Customizing shapes does MORE than just increase the power delivered to the scan target. It helps reduce deviation. Behind the scenes this is what’s happening when you get “lines” and “circles”. Those show that you had a deviation in your scan. On low levels, or at high powers and lower deviations, you can bruteforce them, which is what most people do.

Most people just bruteforce scan the line or circle, get a new position, and work forward.

But with probe I’s fresh out of dock on Level IIIs and above, you’re generally going to fail those and not be able to pop the site.

So customizing shapes is an essential skill that takes an hour or so to get decent with, playing with alt, shift, and ctrl keys while scanning.

You’ve also been introduced to how to keep yourself safe WHILE scanning. Do it, practice it all the time in HIGH SEC so you do it effortlessly.

Lastly, just get fast, don’t worry about finessing anything until you’re at the highest zoom. Wasting 5 minutes to narrow into something you can’t perfect until the end anyway is well, a waste of time.

Scanning shapes are not always centered on your cube. That means you can improve your alignment of your custom formations, but that’s irrelevant. Where the shapes overlap represent an increase in power and the shape represents decrease of deviation (so the narrower/better fitted shapes are less deviated).

That means regardless of where your shapes are centered, you center the target where the shape fits the best and has the more overlap.

This allows you to get creative with oblique-to-ecliptic directions. I was going to build one for the line scan, but haven’t truly needed a “tilted” axis yet.

I wanted to follow-up with actual game results for any other new players to consider.

In a 680,000 isk, standard fitted Imicus, in low-sec space neighboring high-sec, I got ~80 million isk for my exploration game day. Worked out to little more than ~10mil isk per hour, but most of that was earned in 2 sites so it’s definitely a game of chance meaning being faster will help you a lot.

I also lost a ~14mil isk can when I failed the hack, that wasn’t counted above, so the haul would have been higher.

The thing is, doing all of these complicated shapes is kind of a waste of time. You can without too much difficulty, scan down III sites with just an alpha scanner, using pinpoint formation. If you do all this stuff it makes the process slower in the end, and why do it when you don’t need to?

Also, wormholes can easily be done by alphas. There are lots of pirate sites in wormholes that don’t have hostile in them, and give way better money than lowsec sites (think maybe 100mil for one). The OP probably only scanned the sleeper sites which always have enemies.

The OP probably only scanned the sleeper sites which always have enemies.

Yeah in short this thread is ret-ah-ded and I was a real noob back then.

Well, good luck on whatever you are doing right now.