So, I was running my Prophecy out of the wormhole to go refit and realized I forgot to grab something…so, I had to go right back in. Got the message saying my ship was too large to fit. Tried several times and no go.

I tried this with some other ships and the same thing…it always bumped me up 5mil mass upon re-entering. I grabbed a Drake and threw some plates on it only with nothing else just to see… Same thing. If I dock up and come back out it seems to allow me through without “offlining” anything…

An increase of exactly 5,000,000 kg of mass sounds like the increase of mass from an online and active 50MN Microwarpdrive module. 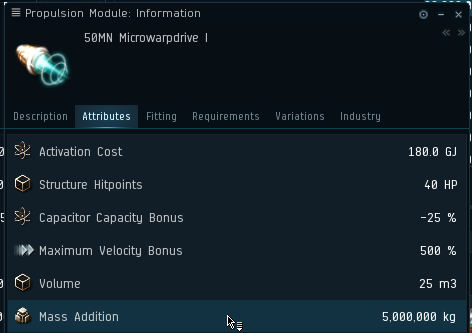 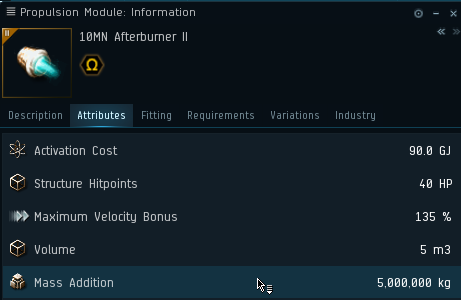 Ok I did have some 10mn afterburners on both I tried. My question still remains…why is it not being counted on the first pass through the hole but is being counted on the second? This DOES help me knowing and I thank you for that… Yet still not understanding why I can dock and come back and the 5mil doesn’t get added to mass… Hmmm…

The mass addition only takes effect while the module is online AND active.

What most likely happened is that you turned on the prop mod to fly towards the wormhole, but it was still online and finishing it’s cycle, making you 5M kg over the limit.

Afik you get error message when trying to jump wh with prop module on. Especially after fix.

@Monstah_Khaos send bug report via f12 menu when you will have that extra mass. Maybe devs will find something in client logs.