Would be nice if they gave better ways to repair standings, going from -5 to +5 was hell.

Having to spam 1’s after you have already used up all your data handin’s kinda sux.

FW should have standings consequence, especially with the coming update as it seems FW will have a bigger impact (geography and technology). Redeeming yourself shouldn’t be a walk in the park, especially if you are a repeating offender. If a redeeming system is added, you shouldn’t be allowed to spam it so easily.

Standings would have to be more important for that thou and atm they give bearly anything.

Then reward should be increased, not standing consequence be lowered.

I ran a series of 5 level 1 missions yesterday to get a better feel for the current status of anti-empire missions. In total, they only gave out about 100 LP […] 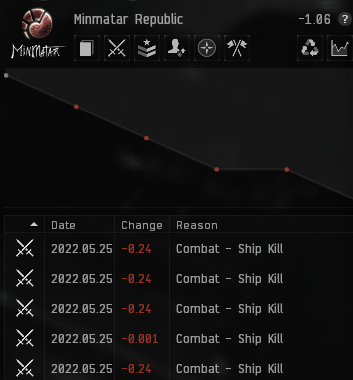 If they are level 1 mission, it was probably just frigates, thus 0.24 loss per tick feels “too much”. I can agree with that.

You could have paid to have your standings fixed, without any negative standings given.

I did the tag hand ins but only the cheap ones, some are ridiculously expensive I realize now I could have done minimatar as well to boost gallente

If they are level 1 mission, it was probably just frigates, thus 0.24 loss per tick feels “too much”. I can agree with that.

The easy solution here is just to have specific agents for anti-empire missions. They don’t necessity need to be tied to fw. People who run them can make the choice to crush their standing against the other empires if they so desire and it stops annoying all the mission runners to decline those missions.

What might be an interesting addition, if a player is in fw, they would be able to attack anyone with -5 standing to that empire without concord involvement. I suggest letting players reset their standing if that is implemented. I suppose this would hurt tag collection though, which Small Kitty Paws warned against.

While the suggestion in the last paragraph was specifically for anti-empire missions, since CCP is going to allow players to pledge allegiance for any faction, even the pirate factions, if CCP is brave enough, they could implement the suggestion for anti-pirate -5 standing as well. Empire space would effectively turn into a sort of mesh between null sec space and empire for those players, where everyone could shoot them, and they could only shoot the players with -5 standing against their chosen faction. This of course, only works lore wise if concord recognizes pirates as legitimate entities.

I should also point out, a -5 standing, pledging against, or war status, should also block players from docking in any station associated with a corporation, faction, or empire just as CCP plans to do with the rest of the fw systems.

This of course, only works lore wise if concord recognizes pirates as legitimate entities.

Something I just thought of: since the smugglers have been attacking concord outposts, I suppose it’s possible to have some lore bs where the smugglers / pirates have to hack concord structures in order to allow them to participate in killing players with -5 standing toward the pirate factions.

So the game play would be something like: See a specific player with a -5 standing toward your affiliated pirate faction. Scan down the concord outpost in the system (which could be greater in strength with higher sec status - this ties into one of the fw features I suggested in the op.) Hack the system, which would give a time limed ability to attack the specific player in question. Find the player(s) in system, and kill them.

Lore wise, they wouldn’t be able to take the whole concord system offline, but inserting themselves into a system that recognizes the other factions might very well be something within their power.

<–Once again, take this with a grain of salt. I don’t think CCP will be adding a legitimate way to kill highsec carebears, but I do kind of like the inclusion of the hacking mechanic. Perhaps it could be implemented into highsec fw in some way.–>

The easy solution here is just to have specific agents for anti-empire missions. They don’t necessity need to be tied to fw. People who run them can make the choice to crush their standing against the other empires if they so desire and it stops annoying all the mission runners to decline those missions.

I’m confused, were’nt you already talking about the FW security mission agents? I’m under the impression that you are suggesting something that already exist. Faction Warfare agents exist. Missions against the ennemi faction is what they give all the time. Not sure if people really do them though, when I tried them they send you to ennemy systems far away, making the time spent travelling not worth the rewards compared to regular security missions in high-sec (in addition to obvious higher risk for long route into low-sec).

Regular NPC security agents are fine. For level 1 and 2 missions I’ll decline any “anti-empire” mission, as the standing loss is not worth the small rewards (and useless tags). Level 3 and 4, sometime I’ll do them, sometime I won’t. Some of the missions level 3 will only give a 0.002 standing loss and pay 30ish million ISK in tags, so absolutely worth it (for me) 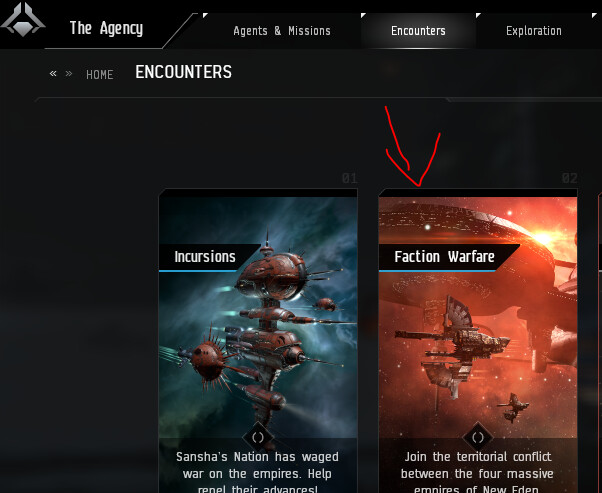 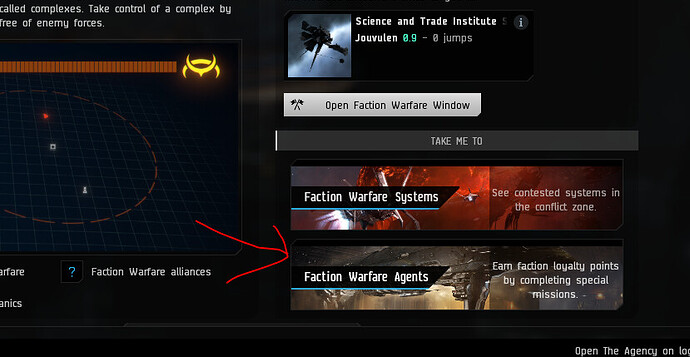 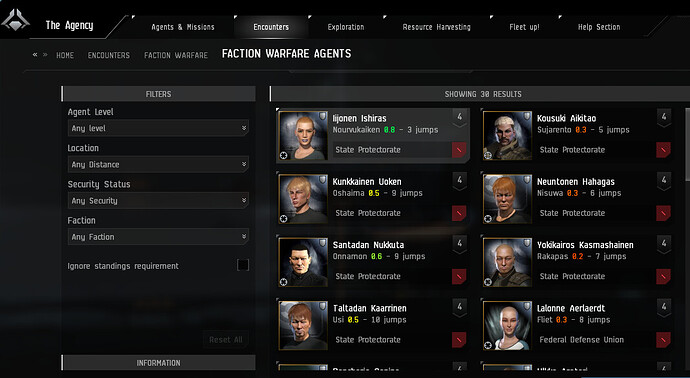 I’m under the impression that you are suggesting something that already exist.

In the op I did suggest putting all those anti-empire missions into FW, but the first reply convinced me that might not be the best idea due to the LP store issue.

when I tried them they send you to ennemy systems far away, making the time spent travelling not worth the rewards

Yeah, I have no experience with those but I’m aware of their existence. People tend to want them removed.

Regular NPC security agents are fine. For level 1 and 2 missions I’ll decline any “anti-empire” mission, as the standing loss is not worth the small rewards (and useless tags).

Clearly there’s a disconnect here. What you replied to, was me suggesting EVE having some normal agents which only hand out anti-empire missions and removing those missions from other agents which will only handle pirate missions. No traveling far away. No declining due to standing issues. And we can place those anti empire agents along the front line systems so they make more thematic sense in terms of the scope of the in universe lore (since those agents only send players a 1 or 2 jumps usually.)

What if part of the lore is concord has gotten what they want from us and just leaves for jove space, while the factions are left to defend their own space and then standings become a big part of it.

Which also means saucide ganking would still be possible ofc but with a much harsher consequence of loosing faction standings, which is much harder to repair than sec status.

I have a feeling this will reduce ganking to only worth while targets and new players will probably be left alone as no one is going to loose faction standings for no reward.

Or concord just splinters and crumbles as an organization, each empire taking their share of it, which would upgrade their own defense fleets to be able to crush capsuleers. Sold suggestion Resonance.

As long as that new commandeered tech comes with new ships

, maybe that new tech could have to do with how Concord always just seem to appear out of no-where. We think they just appear but whats actually happening is that they activate their ADC’s mid warp which speeds up the warp 20x and they just zoom to grid super fast and have a few seconds where we can’t hurt them and we think they are godlike.

The factions take this tech and implement it into their HAC’s which upgrades their ADCU’s but something goes wrong in the process and reduces all their ranges drastically.

So with good ping’s or tackle pilot’s giving warp ins hac’s are able to dominate warp to brawling combat giving people very little time to realize what is happening and “warp away”.

And the new faction police can use these ships to police their area’s better. And a decent way to imulate this with the police is an interceptor stalks you and as soon as he gets a good ping the hac’s appear.

It might just be some sort of in system cyno that’s built into capsuleer tech, (the pods and local chat). When a ship with that tech is attacked unprovoked, it activates the special cyno that allows concord to arrive to the location immediately.

So it could provide a new high slot module, that allows you to instantly travel in system to a fleet member. Honestly, that feels a bit broken. It probably would be better to only allow a specific line of ships to to that, if at all, as well as create a long cooldown for the effect. Maybe also prevent warp during that cooldown to simulate burning out (or overheating) your warp core.

When a ship with that tech is attacked unprovoked, it activates the special cyno that allows concord to arrive to the location immediately.

Auto things can be abused thou

better to make things skill based as well with some type of sacrifice like being tied to ADCU so you have to burn that cd but I like the no warping out after thing that sounds spicy.

I have a feeling HAC’s are getting nerfed soon, so would like to contribute to a way to make them fun ships to use, just trying to think what would be a cool mechanic. The last cool mechanic that was fun was the command destroyer boosh.

And what made it fun was trying to chain them with your fleet mates and then you end up in some wierd location while having picked up 1 or 2 strangers along the way was great.

I like the no warping out after thing that sounds spicy.

Sounds like we’ve got a new fw ship line idea.

I have a feeling HAC’s are getting nerfed soon, so would like to contribute to a way to make them fun ships to use,

When the role bonuses were initially introduced, I said at the time af’s and hac’s should receive afterburner bonuses (this was before sansha received that as a racial bonus.) That would help them fill their intended role as a brawler, because using a speed bonused ab would make them unaffected from warp scrams turning off mwds.

I do like the ab bonus on hac’s thou it would probably make the most sense with with those t2 resi and brawler setup with ranged bonuses swaped for something else.

Hmm what about a roll bonus that reverses the effect of the web and doubles the speed of anything you put it on, that way if someone is trying to get under your guns you increase their speed and they swing outwards then you turn it off and boom perfect transversal

same thing if someone is trying to ram you with mwd on you reverse web them and they go screaming passed you and way out of range. lol

If you have a friend you can catapult them for that web cycle which is short but could be fun as they fly passed you. Not sure how its going to help them brawl thou

design challenge. Could be something for a navy destroyer line thou as destroyers are more short to medium ranged.

If you have a fragile e-war ship in fleet they can orbit the navy destroyer who can increase their sig tank with it lol.

Reversing the effect of the web might be kind of hilarious with people trying to web their fleet mates to get higher speeds out of those ships. Imagine a bunch of frigs with that bonus webbing a regular bs so it could go 5kps