The Scope’s Galactic Hour with Ret Gloriaxx brings your roundup of the latest news from around the cluster as a new wave of protests flare up in the Caldari State following shocking scenes broadcast by Guristas Pirates on corporate networks; Amarr Privy Council to meet in full session; and Triglavian occupied territories see rising planetary conflict. 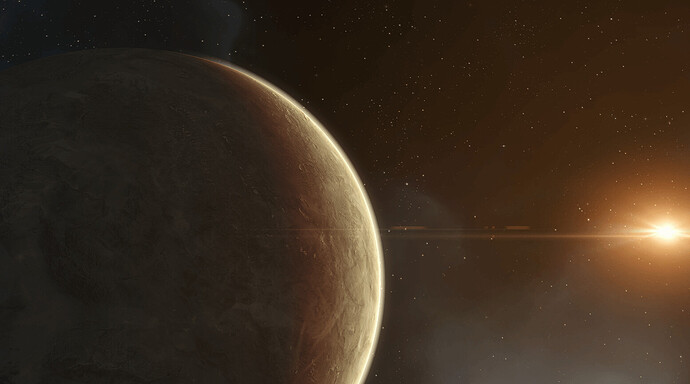 Anin, Lonetrek – A new wave of furious protests have erupted across the Caldari State following the broadcast of a visual record purporting to show Lai Dai Protection Service troops brutally suppressing a protest held on Yanala Day in one of the Anin V mining colonies. Caldari State authorities have called for workers to return to their homes, emphasizing that the visuals were broadcast by Guristas Pirates on a number of corporate channels apparently hijacked by infiltration programs.

The broadcast video appears to show LDPS forces firing into a crowd of workers assembled in protest at the central transit hub of the Solva settlement on Anin V. A large number of workers evidently gathered on Yanala Day, March 22nd, to mark the Battle of Caldari Prime while protesting both the mishandling of the Triglavian Invasions and working conditions at the mining colony. It is unclear how the violence started but LDPS troops are seen using stun batons before switching to firearms identified as “riot blasters” by the Guristas commentary.

Lai Dai Extractive Industries runs Solva as a standard pattern underground mining colony to provide resources for its parent megacorporation. Lai Dai itself has condemned the video as “fake” and the broadcast as “criminal subversion aimed at destabilizing the Caldari State”. The Solva settlement itself has been under a quarantine order for several weeks, allegedly due to an outbreak of the widespread novel virus affecting many mining and manufacturing colonies across New Eden.

Protests have broken out across Lai Dai corporate territories with large crowds surging around Lai Dai’s primary spire on New Caldari Prime. The Caldari Navy and State Peacekeepers have deployed to provide security at a number of megacorporation estates as protests have spread and corporate security forces struggle to exercise restraint.

The facade of unity usually maintained by the megacorporations of the Chief Executive Panel has continued to be placed under great strain by these latest events. Lai Dai’s CBD and NoH allies in the so-called “Forest Faction” have backed its line that the video is a Guristas fabrication. Kaalakiota and Sukuuvestaa of the “Mountain Faction” have restricted themselves to issuing calls for workers to disperse and condemning Guristas “criminality”.

However, the Hyasyoda, Ishukone and Wiyrkomi corporations of the “Ocean Faction” have authorized their workers to assemble in corporate plazas and settlement squares, firmly ordering their security forces to restrict themselves to “protection of corporate property from vandalism”. Additionally, Wiyrkomi’s Senior Executive Director for Infrastructure Security, Akimaka Saraki has declared that the “Caldari people have a clear and ancient right to protest incompetence and malfeasance among the executive classes”, and ordered the Wiyrkomi Peace Corps to “protect Wiyrkomi corporate citizens from criminal abuses”. Director Saraki’s remarks echo comments made by his father-in-law Akari Seituoda, the former CEO of Wiyrkomi-Seituoda Heavy Industries, during the Caldari Protests of YC122. 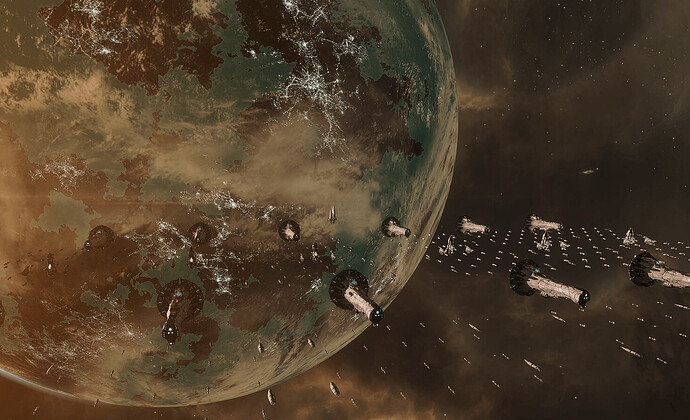 Dam-Torsad, Amarr Prime – Empress Catiz I has summoned the heads of the Royal Houses of the Amarr Empire to the Imperial City of Dam-Torsad for a full meeting of the Privy Council. The Amarr Empress recently concluded a tour of the Ammatar Mandate and returned to Amarr Prime last week, accompanied by Royal Heir Arim Ardishapur and their respective diplomatic and military retinues.

Observers of the tour of the Ammatar Mandate suggest that Empress Catiz was “impressed” by the ongoing economic development of the Ammatar Mandate under the leadership of Lord Ardishapur and Mandate Governor Lord Ekroz Salaf. The military readiness and continuing fortification of the Mandate was also said to be “highly satisfactory” in Imperial Court held in the Consular Palace on Tanoo II. A number of the “loyal” families of the Ammatar “petty nobility” had their Imperial charters renewed and upgraded, signalling that Lord Salaf’s elevation to full Holder status will be followed by others in time.

Full meetings of the Imperial Privy Council are generally held to discuss a variety of issues relevant to the administration of the Amarr Empire. The aftermath of the Triglavian Invasions continues to pose challenges to all of the core empires, with the continued rebuilding of the Imperial Navy and ancillary armed forces likely to feature heavily in the discussions. 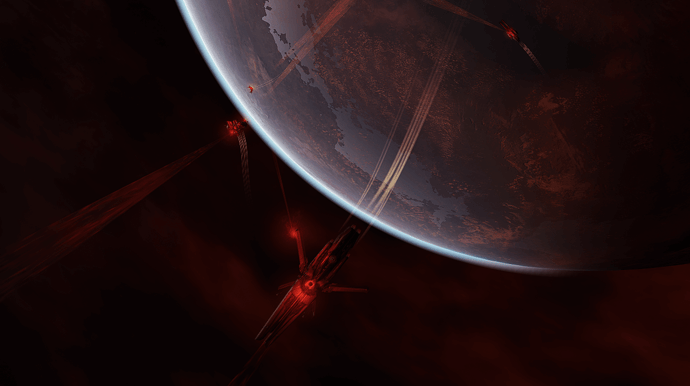 Pochven – EDENCOM Intelligence and CONCORD Conflict Monitors have reported a significant uptick in planetary combat operations across the Triglavian-occupied territories of Pochven. The situation on Skarkon II continues to cause concern as Svarog Clade forces clash with a renewed series of landings by forces loyal to Veles Clade. Skarkon’s Tribal Resistance Army under the command of Valkear General Kril Efrit also continues to hold out, even launching strikes on warclones and “criminals” alleged to be collaborating with the Svarog Clade occupation forces.

Veles Clade itself has had to contend with incursions on its Vale planetary holdings by Perun Clade forces reportedly drawn from the populations of Komo and Sakenta. Resistance efforts by Caldari forces in Komo and Sakenta are believed to be focused on disrupting Perun Clade “bioadaptation” efforts on the basis that claims these are “protective measures” are a cover for wholesale indocrination of planetary populations into labor and military forces.

Svarog Clade’s own forces are apparently concentrating on consolidation within the systems it controls, with surveillance suggesting massive industrial works are under way on a number of barren, terrestrial and storm planets within Krai Svarog. The Svarog border system of Urhinichi is reportedly a particular focus for widespread industrial and military activity by the clade.

Little has been heard from the relatively heavily-populated worlds of Urhinichi since Svarog forces carried out a series of sweeping assaults against Caldari resistance forces. Signs of extensive, possibly accelerated changes to the biospheres of Urhinichi IV and V have been accompanied by reports of extraordinarily high energy readings from the locations of cities on those planets. Independent scientists have suggested the readings are high enough to imply the use of antimatter reactors operating without the shielding that would normally be used in planetary atmospheres. 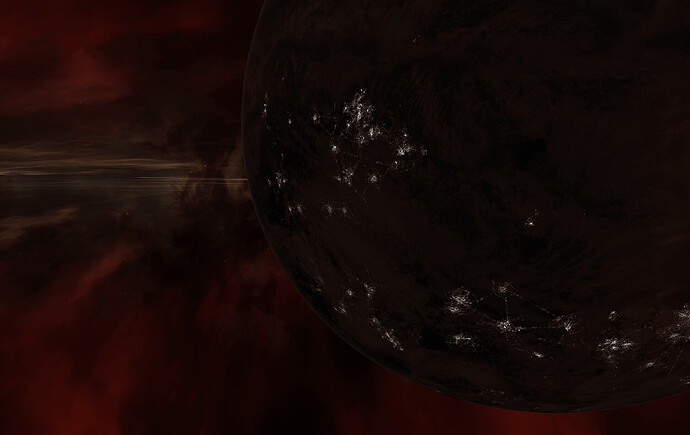 Multiple dreadnoughts are reportedly in low orbit of Tanoo II and are attempting to strike at locations in the vicinity of planetary capital Tor-Ammat, threatening the Consular Palace, capital spaceport and numerous vital installations.

Communications with Tanoo II are confused but planetary defenses are said to be holding with installation shields and counter-ballistic weapons disrupting incoming fire. Ammatar Fleet units are scrambling to respond to an attack that appears to have bypassed system defenses and achieved total surprise.

This attack follows an earlier raid on the Inis-Ilix Theology Council station that appears to have been aimed at seizing the Khanid warlord Alar Chakaid and notorious slaver Orlon Zashev from Theology Council custody. The Scope will continue to report on this developing story.

Tanoo, Derelik – The squadron of Brutor Vanguard dreadnoughts that attempted an orbital bombardment of targets on Tanoo II have been destroyed by Ammatar Fleet forces aided by loyalist capsuleers according to reports from the Amarr Certified News. Ammatar Mandate authorities are maintaining a state of emergency across Tanoo II but report only minor damage to the periphery of the planetary capital of Tor-Ammat.

The Minmatar Republic has issued a firm disavowal of the actions of the Brutor Vanguard forces involved in the attack on Tanoo II and an earlier raid on the Inis-Ilix Theology Council station. The Brutor Tribe council and Vanguard command have also disavowed involvement in the attacks. Imperial authorities are remaining tight-lipped in the immediate aftermath but these incidents are sure to feature in the deliberations of the upcoming Privy Council meeting on Amarr Prime.

Amarr and Minmatar fleets are both on high alert following the incident but are clearly exercising restraint until the confused circumstances of these attacks are clarified. CONCORD has offered its assistance to the Amarr Empire’s investigation and urged continued restraint on all parties.