How can you stop NPC rats attacking you?

I have read that you can get rats in belts to stop attacking you by having high reputation with them. 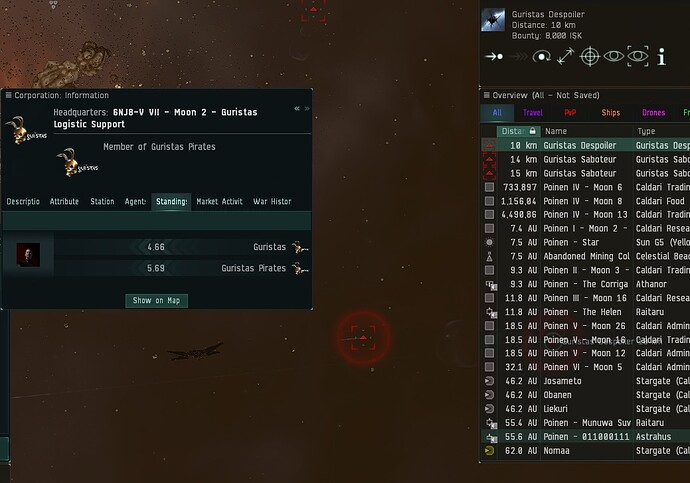 those rats will always attack, regardless of standings.

What you have read and are referring to are the rats with Diamonds beside their names… Those are the ones who will stop attacking you, and even help you when you have a good enough FACTION standing with them…

but normal rats will always attack.

These pirate rats aren’t just computer generated NPCs in different regions like the goat or bear in a fantasy MMO. They’re part of the lore of the game. And they appear in asteroid belts, they have home bases (like the Caldari and Amarr militaries). The pirate factions like Guristas reside in null sec (0.0 lawless space). To build good reputation with them, you can run missions for them (same as missions you run for the empires). You can also destroy their mortal enemies. Just be aware that as your standing with the pirates goes up, there’s a possibility it will go down with the 4 major empires.

Eventually you could even see a time where the pirates will welcome you with open arms, and the empire navies will try to blow you up. To help with this, the skills Diplomacy and Criminal Connections are useful.

His standings are excellent with Guristas, but the rats shown on screen REGARDLESS will always attack.

As i mentioned above, he was reading about the diamond rats that you can prevent from attacking you or have help you depending on standings.

Additionally, the rats with positive standing are white or even blue in overview and on grid, aren’t they?

over 5.0 standings the diamond rats will show as blue and will rep you, over 0 they will be white and just not attack, same for Triglavians and edencom (except for the rep part) all other npcs are old AI and don’t care about standings.

Stick around and maybe you’ll even learn the correct definition of immersion, son.