How do you read these charts?

Hello, I am new tonthe world if eve as a player but I’ve kept up with some goings on over the last couple years. But the one thing I have always found interesting is the economy of the game. With this in mind, would someone well versed in the world of eve be able to explain to me how to read graphs like the one attached? 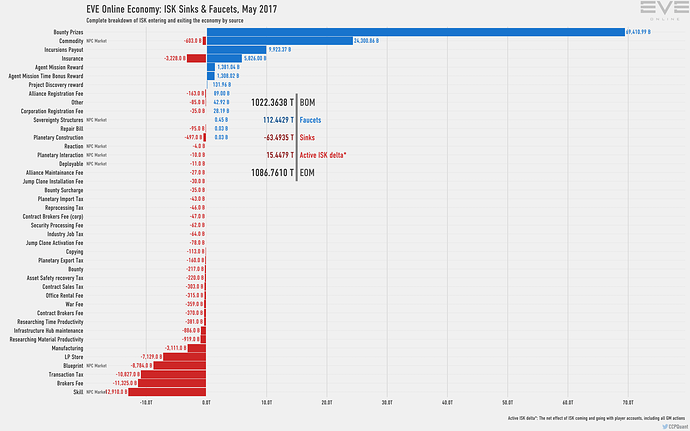 First it’s important to understand what an isk sink and an isk faucet are. A lot of people don’t understand, and think some things are sinks and faucets when they have absolutely nothing to do with it. A faucet is where isk is created magically out of thin air, a sink is where it’s destroyed forever.

Most entries on the graph are self explanatory, but some need some clarification:
Commodity: NPCs on the market both buy and sell commodities. The red is where NPCs are selling, thus destroying isk, the blue is where NPCs are buying, thus creating isk. They buy stuff known as “blue loot” which mostly comes from wormholes.
Insurance: The red is the price payers play to get insured, the blue is how NPCs pay out when an insured ship is destroyed. A ship destruction is NOT an isk sink, because no isk is destroyed, a ship is. The insurance payout makes ship destruction a net isk faucet. (Ship destruction does count as a mineral sink because the minerals used to build it are destroyed from circulation.)
NPC Market; anything the NPCs buy or sell are those entries.
BOM: beginning of month total isk in circulation.
Active ISK Delta: isk entering or leaving the game through accounts going inactive (or banned) or becoming active again. I believe it’s a 30 day inactivity timer on these accounts.
EOM: End of month total isk in circulation.

If you’ve got any more specific questions of what specific entries mean, go ahead and ask.

So if I’m understanding right the EOM had a Net gain of 64Trillion Isk.

If this is correct, shouldn’t the market be balancing out the In-to-out ratio in order to keep inflation from happening?

And I’m guessing the sane rules apply for this graph as well? 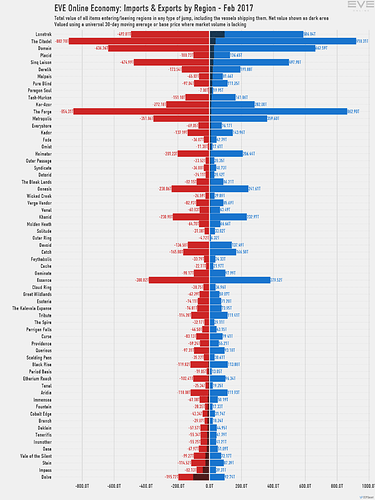 Most economists believe a slight inflation rate is a good thing. Also consider that this doesn’t cover isk velocity (how quickly isk changes hands.) There may have been an increase of 64 trillion isk, but that doesn’t mean an increase of 64 trillion isk is being traded on the market. Much of it likely is going into savings where it’s not getting spent. They say the typical EVE player has an amount of isk equivalent to the value of their most expensive ship. Which means as new players buy more expensive ships, more isk is sitting idle in their wallets.

Inflation can be pretty complicated. It could be argued that if there’s both mineral inflation and isk inflation, that things are still in balance and it’s okay. Or that it’s not the total amount of isk, but market transactions that signals inflation. Regardless, inflation is happening, but as long as inflation remains at a controlled rate rather than wild inflation, it can be considered a good thing as it creates room for more people to take part in an economy.

In that second chart, it’s talking about import/export values. Not isk itself, just items moved in and out (and through). Dark parts are the difference between the red and the blue, showing if they are net importers or exporters.

edit: you’ll notice on the sink/faucet graph that there’s no entry for “mining.” That’s because mining does not create isk out of thin air, it creates minerals, which can be exchanged for isk. If they could be exchanged with NPCs then it would be a faucet because the isk would be coming out of thin air, but they can’t, so they aren’t. Just because someone’s personal wallet goes up, doesn’t mean it’s a faucet, and that’s where people seem to get hung up on the concept.

Yes, it could cause ISK to become worthless - this would likely be the case if all that ISK started moving about. However, we can rely on human behaviour to keep most of it locked away at any one time.

I guess regarding inflation, I should also mention that CCP has admitted to manipulating the market to maintain a steady economy. Specifically they’ve sold confiscated PLEX on the market (which comes from RMTers/hackers banned accounts.) Besides that, they don’t really seem to have any easily manipulated levers to control inflation rates, and that is a common point of concern among players.

They would have to stop pumping money into the system I would figure. Same thing happens in other capital economies when a bank prints too much money, either shut down production to hike up value or push more money out to the economy to drive down the value.

Yes, it could cause ISK to become worthless - this would likely be the case if all that ISK started moving about. However, we can rely on human behaviour to keep most of it locked away at any one time.

Doesn’t that just lead to the idea of wealthy players being able to play the market if they wanted to?

But do they want to? Probably from time to time. There’s no ethical concern because this is done within the confines of a game.

Ethical gaming is a thing but if the owners of the license don’t act as a stabilizing government over the actions of other players, such as those who have the financial wherewithal to mess with the market, then its gonna go unchecked and cause issues.

I’ve read a post today that argues that Eve is not dead but possibly dying.

This is before my time here in-game and in-community. But why do I keep seeing people say it’s dead?

CCP intervenes from time to time, but not in a legislative way. They don’t tell people to be ethical/play-nicely.