I know how we report bots in game, but what if we stumble upon an article on how to do it, can we report these too? how?

Also, is CCP watching for the gankers everywhere in hisec, to make sure they are not using input broadcasting? I’m sure there are active skilled multiboxers out there, I’ve seen a few, but so many gank crews make me think about if Input broadcasting keeps being watched

Hopefully so, but if we suspect… how can we report this?

If you suspect someone to be input broadcasting, you can open a ticket to CCP. I’d include a screenshot of the combat log, often input broadcasters will show up as damage from multiple ships hitting at the exact same second, something that is very difficult to do without input broadcasting.

I believe CCP has logging that will further prove or disprove any input broadcasting claims.

What do you expect ccp to be able to do about something elsewhere on the internet?

Also, is CCP watching for the gankers everywhere in hisec, to make sure they are not using input broadcasting?

Highsec ganking is elite PvP, as described by Her Highness The Princess Aiko Danuja.

I can appreciate that you are so overwhelmed at the motor skills and speed-of-light reactions of some of our operators that you are reduced to viewing them as either magic or misconduct, but you are wrong to do so.

You will find that the amazing feats you witnessed are spectacles of high-octane human endeavour. Wonderful, isn’t it, Adara?

But of course, go ahead and report if you have snide suspicions…

Submit a support ticket via the EVE Online website.

Don’t expect the video to be brought down, but you can at least send the link to CCP so the strategies can be reviewed by their team and potentially incorporated into their bot detection algorithms.

I have received Omega time as a thank you for reporting botting software in the past, so they do eventually read the things. It just took 6 months.

You can report that, you can also leave it.
The effect is the same.
PA/ccp doesn’t care as long as BOTs filling the server.

They don’t even read their own forum.

A botter posted yesterday that they received a 3 day “ban”. Yup 3 day ban for a fleet of bots.

Botting & input broad casting are part of Eve, htfu and join them or stfu.

Also, is CCP watching for the gankers everywhere in hisec, to make sure they are not using input broadcasting? I’m sure there are active skilled multiboxers out there, I’ve seen a few, but so many gank crews make me think about if Input broadcasting keeps being watched 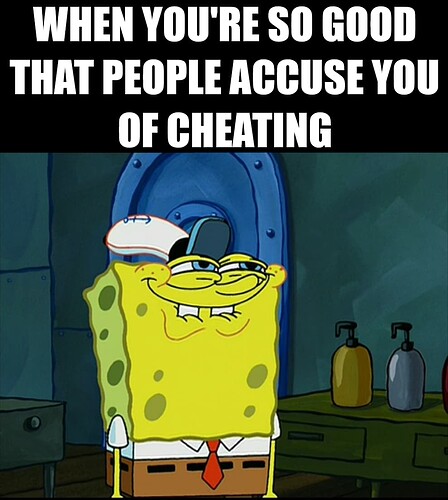 First, the idea that CCP tolerates bots is not only a baseless conspiracy theory, but one that doesn’t even make sense. And, I’m sure that you’re not going to appreciate me saying this, but I want to make it clear to anyone that might be persuaded by your nonsense that you have no idea what you’re talking about. Anyway, I was going elaborate further on why video game companies try so hard to fight against botters, but I have to run.

Second of all, I know for a fact that CCP reads the forums because I have gotten likes and responses from devs. Of course, it is unfortunate that they seem more engaged with reddit than their own forums. But, considering what players tend to post, it’s a wonder they spend any time trying to sort through all of the brain vomit in order to get to the constructive feedback.

Why do you asume that I have been hit?

Go, look at my zkill and wonder…

I’m just asking because it seem obvious and I wonder if they are paying attention. Elite PvP hahaha, I’ll take that as a sarcastic comment lol.

But I didnt accuse anybody, so, your words are worthless…

I can recognize a Coercer bot in low sec within seconds.

I do wonder about what the hell CCP are doing. Most of this ■■■■ isn’t hard to spot.

CCP are using that bot to hype “active player numbers” & over “1 million unique users”, don’t worry no one believes them.