L4 Bounties not adjusted to difficulty?

I have this mission, Buzz Kill, and then all Burner Missions…
Where there’s frigs and cruisers with 90% resists, fast, painful to kill,
which delivers also insane DPS… which bounties are between 10K and 30K…

It costs more with precision T2 light missiles to kill them than the bounty… if
you can tank enough… otherwise it’s heavy missiles for a decent tank…
BS bounties are fine. Cynabals, Dramiels especially… not at all…

I would like to get a better bounties on these small NPC’s…
With all inflation going, these bounties remained static as 10 years ago…

Time for a bounties rebalance??

there is no “insane dps” in any L4 mission. nor complexity, nor lacking rewards for effort.

I am all with @CCP_Rattati on the moving of L3 and L4 missions to lowsec in a coming quadrant.

This guy is a CCP Rattati troll alt char because Rattati doesn’t dare to come to the forums himself.

I am all with @CCP_Rattati on the moving of L3 and L4 missions to lowsec in a coming quadrant.

Me too. It will be the first step in the death of CODE.

The pièce de résistance will be removing mining and making minerals only available in the EVE store.

The bounty is the fact that they pay as much or better than a standard L4 mission in LP and generally die way faster.

No I’m the real Rattati alt,

Me too. It will be the first step in the death of CODE.

CODE.'s mission statement and primary function have always been to relegate themselves to irrelevancy, kind of like the company employee tasked with automating their own job. When its task is complete, CODE. will readily fold itself into two dimensions and float away into the Phantom Zone. So it was foretold, so it will be.

No I’m the real Rattati alt,

I feel like somewhere the ghost of Stunt is screaming for you not to do that.

The value from burners is in the LP and loot.

Thanks for coming to my BOB Talk.

This is my last two hours of lev 4 missions: 30Mil, plus 20Mil Salvage, and some 10k LP’s, or 5Mil at current market exchange rate to subtract about 5Mil in Ammo and Drones. For a Grand Total of 25Mil an hour.
And this was not particularly bad day… a little bounty adjustment would do no damage…
I lost two T2 Hobs, to … Dramiels! No Burners, normal mission… 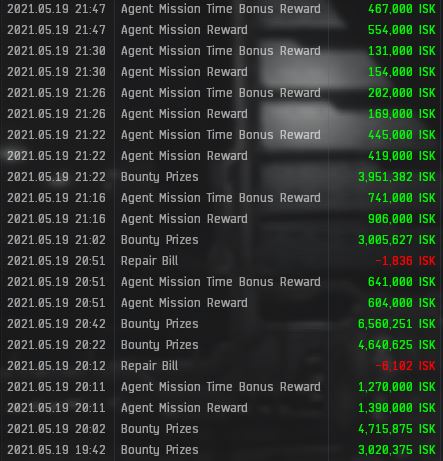 Agree, but if the bounty was 1Mil instead of 20k… it wouldn’t be bad idea… I guess… those aren’t normal frigs…

Bounties in general are a bad idea. They’re a huge contributor to inflation. This game needs way less direct isk deposits and way more assets that DROP and can be stolen as the latter actually promotes MULTIPLAYER CONTENT in an MMO

Why, so that griefers can grief me and not let me play how I want to?

This is a sandbox! This means that if I want the game to deliver vittles straight into my ravenous maw, it’s my right! I shouldn’t have to work for it!

This is an example of a good bounty on a very tuff lev 4 Dram…
They do not drop anything… but at least the bounty is somewhat ok…
I just would like more equal bounties on these things, outside Burner mission also…

Would you run the Burner Angel in a 600Mil Hecate Fit? Yes or No?
Safety is an illusion in Eve…

Yes, I would burner missions in a 600mil ship.