Looking for mercs to teach BLACKFLAG a lesson

Hello citizens of Crime and Punishment.

My corporation, The Sound Of Thunder, was recently subject to unprovoked aggression by a rather pathetic bunch of highsec griefers known as BLACKFLAG. They attacked one of our Astrahus which was the War HQ in an unrelated war and they have since destroyed it.

They brought FAR more logi than is fair, they were easily able to out-repair the DPS from our Astra. In my view that is a broken mechanic, because it means there’s not going to be a fair fight. We couldn’t even kill one of their ships, how on earth is that a fun engagement for both sides. Anyway, it’s allowed and these pathetic griefers had to resort to underhanded tactics like that because they clearly feared a fair engagement with us. So I am now looking for mercs to these these losers a lesson. I want their War HQ (A fortizar in Itamo) destroyed, I want them permacamped, I want their ships and pods repeatedly killed. Who is the recommended group for dealing with highsec groups like this?

Who is the recommended group for dealing with highsec groups like this?

I hear BLACKFLAG is decent at that sort of thing. I hear they just wrapped up aquick war against some random hi sec corp who lost an astrahaus without killing anything so they are probably free.

I suggest you read the thread more closely. BLACKFLAG is actually the group who attacked us lol

I will teach BLACKFLAG a lesson.

My fee is 1 billion isk.

I suggest you read the thread more closely. BLACKFLAG is actually the group who attacked us lol

You’re my new favorite person in these forums. Also I can’t recommend @Aiko_Danuja enough for these sorts of operations.

how much is it to bash other carlos refinery? he had 2 of them

1 billion each, so 2 billion total.

I am prepared to accept payment.

I’ve heard Pandemic Horde once had a highsec presence. Maybe contact them?

they were easily able to out-repair the DPS from our Astra. In my view that is a broken mechanic, because it means there’s not going to be a fair fight.

When anyone puts any structure down for any reason, and is forced to choose the vulnerability window, the thought should be “how many people can I get into fleet to defend this”. If it is zero, your structure is going to have a really bad time.

There are mercs that can be hired to defend your structures in the future. I hear BLACKFLAG offers this service, and they’re pretty good at it with their over-rep logi doctrine (guardians and leshaks still?).

Once payment is made, 1 billion isk, I will immediately declare war on BLACKFLAG and grind them into dirt. Their structures will burn, and they will be reduced to begging for the chance to mine a moon. I await your orders.

But I thought you were going to grind us into dust and permacamp us? You can’t hire someone else to do it, that’s unfair!

Calm down nasty Mcmasty, he is going to hire me for 1 billion isk, and then I will camp you into the ground, you will be asking permission to undock.

I merely await payment, and the Leshaks will be set loose.

To help prompt you to take action.

Your structures in minnie space have also been reinforced.

They brought FAR more logi than is fair, they were easily able to out-repair the DPS from our Astra

It was very fair as you could have sent in ships to counter theirs. It would be unfair if you in your Asrahus were untouchable, able to blow up a fleet of expensive battleships single handed.

If you want a fair fight , you are playing the wrong game. Just like IRL war, you are not going to look for fair fights, the bigger the advantage , the better.

You are clueless if you think that you can get a merc corp to take on BLACKFLAG, as are the best there is. The merc corp would be the ones being perma camped.

I do not think we are the best, we just have the numbers. Which with Logi and Big Badaboom ships does matter. Especially going after structures. We can also never be sure who might come so we make sure we bring the numbers.

I do find it ironic what they posted on twitter. Apparently, we lost frigates, and they lost nothing…

Dunno man… Dont see any loses on our side… 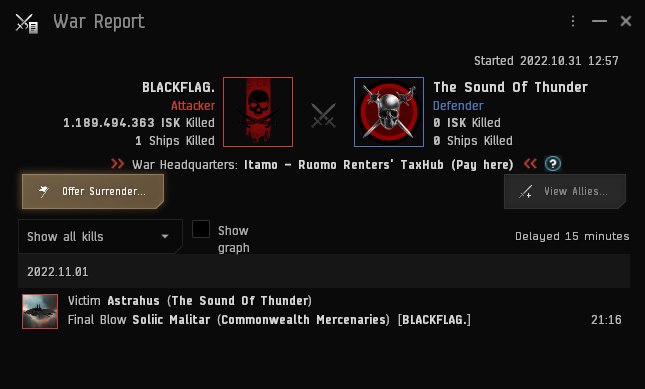 As a pilot that was at the scene of the aggression and played part in it, I would like to remind you of a few things, first we had to taunt you just so you would agress us with the station, by the time you decided to, Armor timer was almost done. You didn’t even deploy and use fighters correctly.the final thing you talk about killing pandemic, they had a small fleet hitting the structure with no logi do I remind you and you couldnt even kill one. We look forward future fights you promised.

I am not sure whether this is a troll post, I can’t really beleive that people would do war decs in hisec and have no idea what Blackflag. really are and how strong they are, however if genuine I am afraid to tell you that they are number one hisec war decker and you will lose against them. Best to think how you work around that fact. Good luck, and try to have fun with it.

They brought FAR more logi than is fair, they were easily able to out-repair the DPS from our Astra.

But was it ‘fair’ for the owner when your own team of just two Leshaks zapped an armed Raitaru ?