Mining is trending down again. @CCP_Swift Where is the uptick that you boasted about?

By the way: How does this go together? The ProdvsDest graph shows a serious dip in Mining but the individual graphs for Ore, Ice and Gas look way too stable for such a dip. 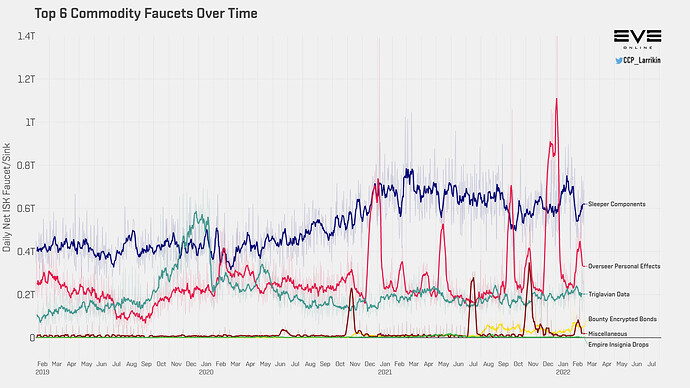 That one looks interesting. Sleeper stuff goes down at the same time as OPE go up. Looks like all these wormholers wanted to crab in even more safety for the points for a while.

Not only that, but look how high at the top Poch is!

Where is it high? In Destruction. But you don’t show data for ISK generation in Poochven. Show the full data and not only a small fraction of it.

Any chance we could get this graph over the past 5 years as going back only one years doesn’t show much since the year of the Great Rorq nerfs happen before. 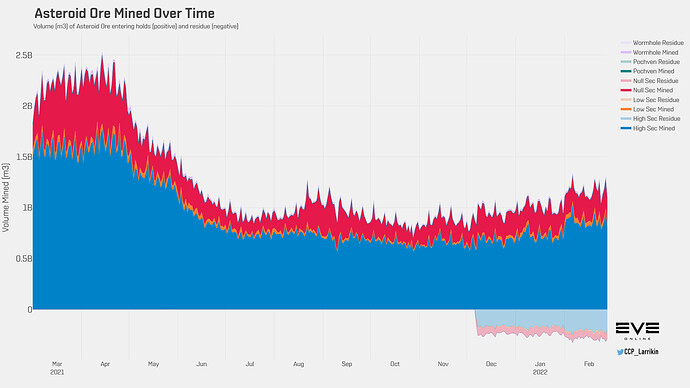 Never saw mer thread so empty ! does that mean economy is really screwed up this time?

Where is the uptick that you boasted about?

Right where he said it was. Honestly, dude, he made a claim about the numbers in January vs the numbers literally the day before the patch went live. Nothing that happened after that point changes how accurate his claim was that day. At this point, you’re the guy standing in the Senate with a snowball saying ‘It’s snowing out! Where’s the global warming, huh?!?’

By the way: How does this go together? The ProdvsDest graph shows a serious dip in Mining but the individual graphs for Ore, Ice and Gas look way too stable for such a dip.

The Production v Destruction graph is measuring in value, the individual mining graphs are measuring in volume. If you look at the produced v destroyed html, you can pull up the actual #s for the drop: The January peak (on the 25th) was 1.090592T. End Feb was 944.8558B. So that’s a drop in value mined of 13% from the peak, but it’s only daily snapshots.

Meanwhile, the MPI isn’t that granular. It only gives you month-by-month, and shows an overall rise in the Mineral Price Index. Looking at the breakdown, we see the increase in the Low-End Minerals (0.04) is twice the decrease in the High-End Minerals (0.02). The total change in MPI, though, is from 179 to 183.

Taken together, this suggests that the loss in mining value despite volume mostly staying the same or even increasing some is likely the result of a general move from mining ‘high-end’ ores toward ‘low-end’ ores and just ramping up the volume mined to take advantage of rising prices.

Never saw mer thread so empty ! does that mean economy is really screwed up this time?

Eh, I’ve been working on a non-EVE spreadsheet project for the last few days, just taking a break atm.

I am kind of concerned about the reduced ISK velocity overall, and the fact that it’s continuing to drop. Market activity is slowing significantly. We’re at 66% of the velocity we were at 2 years ago (0.365 vs .0546) with 114% of the ISK supply.

That velocity is by taking the total market trades over 30d and dividing by the available money supply, so reversing it should be simple, and that tells us:

Which is 76.2% of the trade volume, so we’ve lost about 24% of the overall economic activity in the last 2 years. In that time, PCU’s dropped by ~14%. So you’re looking at fewer concurrent logins, and less market activity, even though the money supply’s never been higher—and the market activity is slowing down faster than the PCU is dropping. So… that worries me. I’m hopeful that things stabilized in the Jan-Feb window, and we’ll start to see some real recovery, but… CCP needs to find ways to get people to come back and get in space, not just find ways to piss people off with ham-handed money grabs.

Just wondering, didn’t the changes to market happen in that period? The ones that made it harder to keep undercutting without additional cost? Or was that change longer than 2 years ago?

I can imagine such a change would have had an impact on how many items are flipped on the market, and thus the market velocity?

Which is 76.2% of the trade volume, so we’ve lost about 24% of the overall economic activity in the last 2 years. In that time, PCU’s dropped by ~14%. So you’re looking at fewer concurrent logins, and less market activity, even though the money supply’s never been higher—and the market activity is slowing down faster than the PCU is dropping. So… that worries me.

It worries me too, but I think it is hard to fully understand the story with the data we have.

The reality could be one of the following – and some of these are less likely than others:

I don’t know the answer. There’s not enough data. But some of these scenarios are worrying indeed.

Just a quick update - one of the charts, Service Fees: Breakdown by Provider, had some small issues that were corrected this morning.

I think ppl are fed up with so many (bad) changes to the economy in such a short time. They don’t pay attention anymore. It’s more like: whatever. And just do their normal activities in game than comment it out of game in forum. Who wanted to say anything important have done it already months ago. Me included.

You cannot repair fast something which you intentionally broke. Look what CCP is doing now. Reversing/fixing/balancing Surgical Strike changes. It’s like rope pulling right and left. Doing that constantly and especially to the economy is like toying with matches.

It’s like doing something just for the act of doing to show that Devs are alive and game is alive. Which is good to some extent and bad if you overdo. 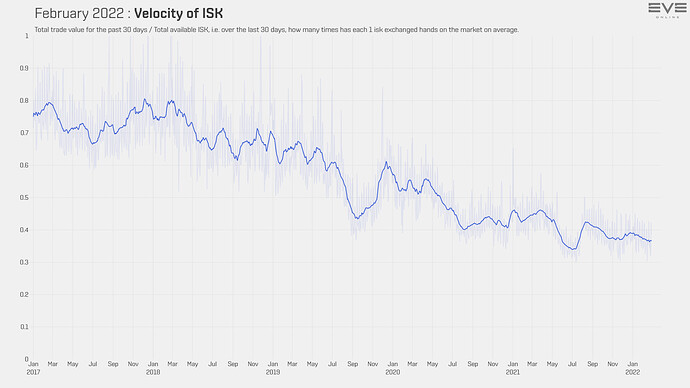 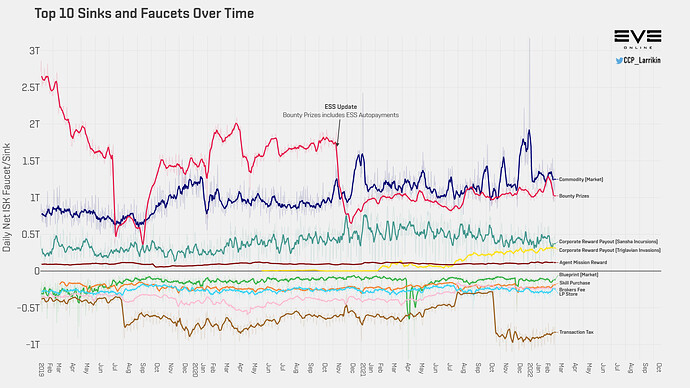 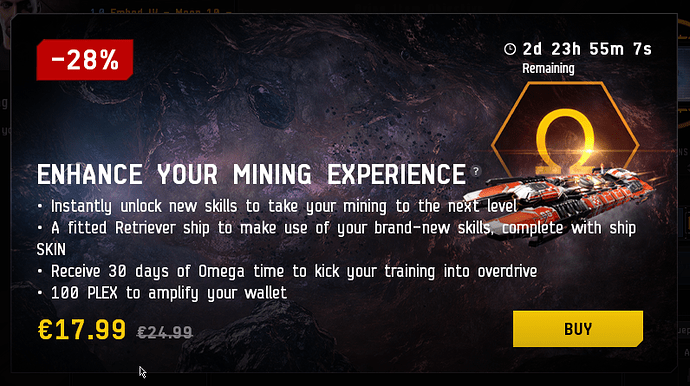 Subscriptions are not a god given right.

Careful dude, appearently quoting CCP is “inappropriate” behaviour, according to the system message i got when my post was hidden from view.

When their own truth is inappropriate…

It was never truth.

The truth is one and universal. People don’t recognize truth from opinions and different points of view. Is this picture truth or depends on the point of view? 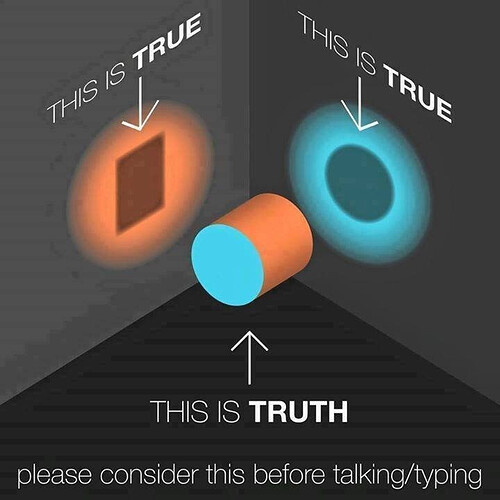 We are still missing the ISK Velocity raw data. It was last in the December 2021 files but not in the January or February 2022 files. It was called IskVolume.csv and plotted the chart “February 2022: Velocity of ISK”

Hence my use of “their truth”.

The current market movement will result in only short-cycle boring production on a daily basis. Eve Online is a wonderful game but has an outdated software engine and must be careful that strategic players leave the game for a better game and simply take their losses (on resources) because there is no realistic prospect of recovery. An economy without a well functioning Central Bank isn’t very attractive to investors.

Ah yes, the first thing I look for is a Central Bank. LOL. The second thing I want is broker’s fees and taxes. /s

How are we on Plex? Is there indication to suggest players are moving alot of it around?

That just already happened and is happening now. I lost money and time to this game. I was angry first, then had grief, now I don’t care anymore.