I have a new weapon type idea called the ELECTROMAGNETIC RAILGUN.

It would basically be using huge amount of capacitor to fire an extremely long range projectile. It would have to be reloaded after every single shoot and have extremely long reload time between shoots for a huge amount of damage with a very very slow tracking speed. The further away the target the more dmg it would do and the only dmg type would be kinetic however it would ignore the target kinetic resistance by 50%. Since the reload time is so huge per shoot and the tracking speed is so slow it’s important to hit the target with every single shoot otherwise it would take a huge reduction in dps.

This new weapon type would be the ultimate sniper for long range combat.

I think it would be awesome new addition to the game.

tracking speed is so slow it’s important to hit the target with every single shoot otherwise it would take a huge reduction in dps.

Tracking is irrelevant at extreme distances, just fyi.
Also, Railguns (you know, the things we already have) already do what you want, just use them. 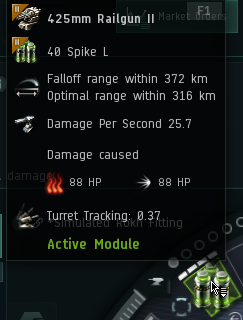 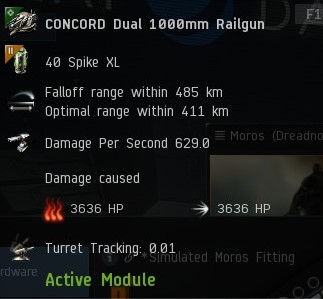 Piss poor tracking, extreme range (in fact further than lockable range), and stupid amounts of damage if it hits.

Scott has the subcapital variant.

Except it is not new, learn to play before you post changes.

I like your spirit! This an unrefined, but pretty funny idea.

Railguns are already a current weapon type, so that’s out.

Conceptually…
This sounds an awful lot like a large Artillery gun (which is also a current weapon type). It fires slowly and does massive volley damage.
However, the concept adds on railgun range on top of all this.

Basically, what I am reading from this an “XL Railgun” (which is also a current weapon, but for dreadnaughts) for smaller ships.

As pointed out above; Since tracking isn’t a big issue at long range and it has the strengths of 2 weapon types (long range and high volley damage), what are the tradeoffs?

Artillery already has the problem of firing at a super slow rate. This means that it is currently used in “warp in, fire, warp out” tactics.
This idea basically outclasses the artillery in its current role by effectively being better than it.