So on YouTube and guides I’ve seen an estimated profit of gas mining at about 20mil/hour for the cheap fullerites (C60.C50,C70,etc) but I just did that for the first time, and scanning took up a pretty considerable amount of time, which resulted in me getting about 4 million after playing for just over an hour.

Also, the prices for gas looks a little bit lower than what the average price stated when you hover your cursor over the item.

Any tips for me and regarding the price thing? Do more dangerous wormholes give better gas?
Thanks.

Any tips for me and regarding the price thing?

Put the gas on the market at the higher Sell Order price and set your duration for the sale to anything up to 3 months.

Just in the same way that you immediately sell (to a buy order), other people will want to immediately buy (to a sell order) for a higher price than they would otherwise pay if they place a buy order and wait.

People make a lot of ISK simply from flipping items by buying them cheap and selling them for more ISK. Additionally, large industrialists will often place buy orders at below the regional average price so they can increase the profit with what they manufacture.

Additionally, the average price in a region can be manipulated, so it isn’t always a great thing to go off in terms of pricing.

Check something like eve-central (currently down for maintenance) or eve market-data ( https://eve-marketdata.com/). These will give you a good idea of the best place to sell your gas (look at where the highest buy prices are if you want to sell immediately, or look at where it is selling high at reasonable volume.

Good Points from Scipio. Here are a few other things to consider.

The price that is shown when you scroll over the gas that you just harvested takes the local buy and sell orders into account. It does not reflect the current price at trade hubs. As Scipio suggested, get the current buy and sell prices for all the gas and have it as a metric to go by. When you go into a wormhole and find the gas, you can then calculate what your actual ISK per hour is.

Remember, the more dangerous the WH you go into, the higher the value of gas clouds. But also remember that some of these are sleeper sites, meaning that you will have rats who will come in after about 15 minutes. Be aligned and ready to warp to a safe spot as soon as that happens.

Not sure how current this Wiki page is, but its a good start for when you come into those gas sites in WH space. Once you scan things down, make sure you properly research each site to know what it will have and if it will have rats in it.

So on YouTube and guides I’ve seen an estimated profit of gas mining at about 20mil/hour for the cheap fullerites (C60.C50,C70,etc) but I just did that for the first time, and scanning took up a pretty considerable amount of time, which resulted in me getting about 4 million after playing for just over an hour.

Yeah, unfortunately people tend to leave out the time required for scanning when they quote those numbers. It is random though, and sometimes you find a wormhole or chain with a bunch of valuable gas while other times you spend much longer scanning for less choice. Generally though, the shorter you play, the longer component of your time will be spent scanning so a longer play session may yield more ISK/h total. Generally I would spend 30 minutes or more scanning and then an hour or two vacuuming up the gas and would get more like 20-40M ISK/h total, although if I could snag a C320/C540 it would be a fair bit more.

The prices of the high ends have come down a fair bit from a few years ago when I was experimenting with this though, but you probably should still go for the highends if you can given how cheap a replacement Venture is. Here is a summary of the current gas prices for your reference:

Some gasses, like C60s probably aren’t worth your time unless you have nothing else. Don’t be afraid to just cherry pick the valuable gas and move on to the next site.

I spent 45mins scanning, then about 30mins huffing about 5mil worth of gas before the sleepers came.

The systems they connect to are not fixed, so any system potentially can have a wormhole connection. Once your skills improve, you can usually scan signatures pretty quickly and move through systems in highsec rapidly until you find a wormhole.

One option is to look at the eve-scout website and see where there nearest connection to Thera is. Then scan into Thera and then from there, out to a wormhole (the sigs are also listed on eve-scout). That way, you can rapidly get into a wormhole chain.

For example, I am currently sitting in Dodixie: 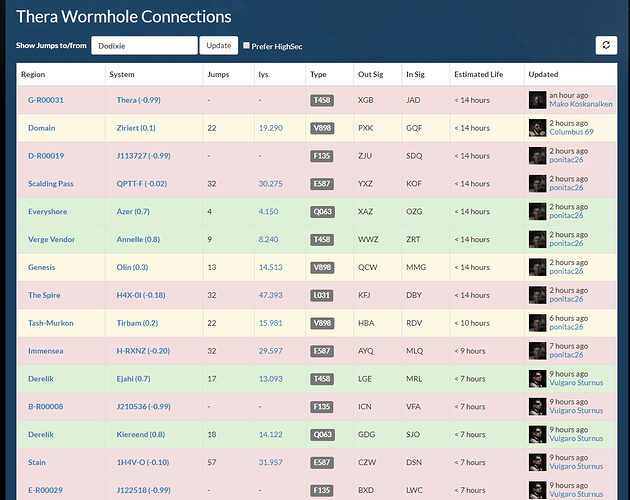 From there, Azer has a connection into Thera (sig OZG in Azer) just 4 jumps away. I could go there, scan that one sig and be in Thera in just a couple of minutes.

Then I could scan the ZJU sig and be in J113727 just a couple of minutes later. Once in a chain, you can continue following it through until you find a highsec exit somewhere else, or head back and out through Thera again.

Thera isn’t always close by, but it’s often worth looking to see if it is.

The systems they connect to are not fixed, so any system potentially can have a wormhole connection. Once your skills improve, you can usually scan signatures pretty quickly and move through systems in highsec rapidly until you find a wormhole.

As Scipio says it is purely random where wormholes spawn. Improving your scanning skills, using a dedicated scanning ship, and practice will increase how quickly you can scan down signatures in general, and specifically wormholes. In fact, you might want to even select systems to search with a small number of anomalies as explorers and people running combat anomalies will clear out those signatures for you leaving just wormholes whereas in some dead-end system with a lot of anomalies, you will have a lot of combat sites to sort through.

You may also want to start your search in a quiet lowsec system. Each wormhole has a static connection that links it permanently to specific regions of space and the lowsec ones are less popular and more likely to be both uninhabited, and have accumulated a bunch of gas signatures. The highsec-connected ones tend to be more busy, visited both by highsec day-trippers and wormhole residents looking for a transit route back to the trade hubs (or just living in that wormhole).

I went to a couple of lowsec systems, spent 30mins there but nothing.

No wormhole signatures at all? That seems unlucky. There is not guaranteed to be one in every system of course, but lowsec actually has slightly more than other places with more lowsec-to-lowsec ones (which won’t be especially useful to you though).

All I can suggest is keep at it. I would guesstimate that 50% of k-space systems have a wormhole, maybe more. And I think that number is higher in a wormhole systems themselves which obviously have at least one wormhole, but they are more interconnected with each other so the majority will have at least one more in addition to their static connection(s).

I spent 45mins scanning, then about 30mins huffing about 5mil worth of gas before the sleepers came.

Finding worm holes is, like anything with exploration, all luck and chance. More often than not you will run into a wormhole. When you do, its the luck of the draw for what type of class WH it is. The higher the class, the better chance you will find gas sites within.

What you can also do is continue to look for more WH once you get into WH space. If you jump into your first one and find nothing, save the WH in your book marks then find another one to jump into and look into the next one. This can get riskier and risker the more WH you jump through, but as long as you keep track properly so you can return home, then you increase your chances of finding gas sites.

You’re going to run into that on the weekends mostly. Lots of people will scan during the weekends and use the signatures. If you have a covert ops cloaking device and your skills are high enough, push into null sec and you’ll find plenty.

Wait, can alphas mount cloaks? Or can they after the skill increase?

From what I remember reading the new alpha skill system doesn’t include cloaking. You get battleships and some more variety in racial hulls along with a higher cap on max sp and use of some alpha skills that can only be trained under omega or injected.

ISK/hr figures in WH are over reported everywhere. People say things like “I make 300/mil an hour ratting in the c4 static in a paladin” but they don’t include the 1.5-3 hours they spent rolling holes and scanning to find enough sites. If you’re ratting in someone elses hole there are some scenarios where you CAN make the reported isk/hr. One of them is you scanned the system for some other reason, looking for PvP or a HS, and the ratting/gas mining is just a bonus. The other way is your corp mates scanned the hole already and you are just a mooch running sites off of their effort.

Gas mining like this is good AFK I don’t care if you pod me ISK/hr, but for low level gas it isn’t worth the effort to actively mine it for sale at a trade hub.