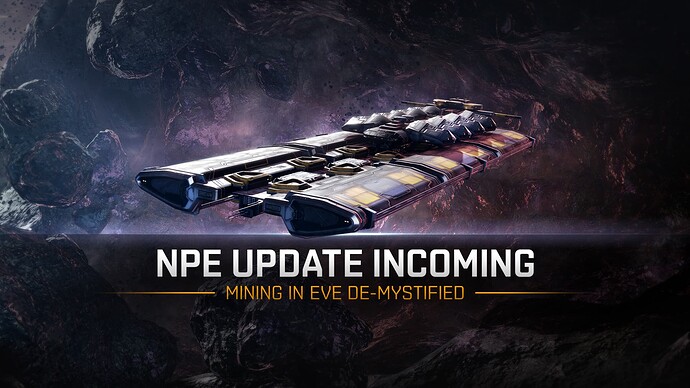 In today’s news item we talk about the new mining adventure which has landed on Singularity. It extends the storyline established in the new player experience which released last September and delves further into the mystery surrounding the attack of the AIR station.

Why not jump on Singularity, spin up a new character and try it out for yourselves? We’d love to hear your impressions and any feedback you may have.

I already sent my notes in.

nope. already bashed my head against that brick wall three times already. not interested in being unpaid QA outsourcing. hire someone to do QA so they can get told “we can’t repro that” instead.

Maybe stop making miners the go-to for pvp activity and you’d see more new players/miners stick around. As it is, mining ships and refineries are just pvp fodder. That’s an unsustainable model given that indy is the most expensive play style in Eve.

After skipping the intro cutscene I did not have any spoken tutorial dialoge during the first part of the tutorial right up to the point of getting podded. After that the voice over played again.

In the mining half of the tutorial I encountered several small things:

After being told to approach the first asteroid by Aura, the blue overlay points to the Orbit button. The Orbit button itself is not highlighted, instead the Approach button is flashing blue below the Overlay.
This repeats for the 3rd Asteroid and the Dramiel Wreck as well.

After arriving in the Career Agent System and continueing the tutorial up to the point where Aura tells you to accept a mission. Her 3D avatar is rendered, afterwards it disappears. 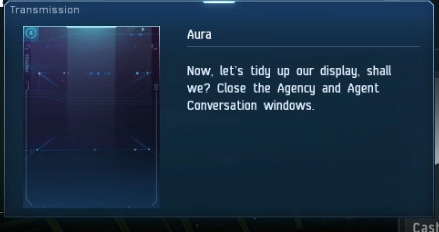 She briefly appears just to disappear again during the skill plan part right until the final message of the tutorial. 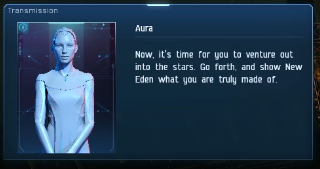 I am guessing since I changed my email account, recently; I am locked out of singularity until the next mirroring.

My biggest concern, is the longer we hand-hold walking players through the game, the longer it is till they are forced to interact with other players.

There is in help chat at this moment, a new player trying to find the modules, skills, rigs and implants available to affect a specific ship attribute. There is no ‘one button’ press to solve. So, a help chat discussion with other players will solve this issue. We – the help chat – will point out a variety of options, overwhelm him with our superior game knowledge, or troll him for being a noob.

Will we retain him, or will he quit in frustration?

Ah yes, new player experience to teach new players about a side of the game, where, should players choose industry, the developers continuously screw them over.

STILL no explanation of who AIR is or why we should care about what’s happening.
All this needs is an extra 20 seconds to provide a little bit of exposition and context in the introductory cinematic (which itself still stutters and lags and looks poorly edited).

STILL telling rookies to start orbiting things from 40km out.
How hard is it to tell them to approach first?

STILL not telling rookies to web the frigates, but to web the cruiser instead. LOGIC???

STILL signposting rookies towards mining and missions, both of which are awful content and awful ISK for new players. Then you wonder why you can’t retain players.
And if you ARE going to signpost them to the Career Agents, for the love of BoB fix those arcs!
They’re an embarrassing mess.

AURA gets bugged out when trying to get you to set the first Career agent skill plan, she doesn’t recognise that you’ve started it.

Various AURA (and other NPC) interfaces close as soon as you close another window, often cutting them off mid-sentence. Keep these open until they player clicks the NEXT button.

It looks glorious. The mining site is stupendous.

A fairly good explanation of the mining process and the difference between raw ore and refined minerals.

A pretty good quick overview of the Wallet and taxes.

Got rid of some of the meaningless guff that Aura was throwing at you. A far more streamlined experience all round.

A decent attempt at explaining the Skill Queue and Skill Plans, but it’s still rushed and should be explained a bit better other than “go here, click that, do this”. Tell us WHY.

Overall impressions:
It’s better than it was but there is still a long way to go.
And it’s taking you far too long to iterate each new part.

Just created a new character on a new account. PLayed the original AIR intro with the station being blown up. Was placed in the starting station and told to go talk to the career agent in the station a few jumps away.

At no point was there any mining story presented or available.

Not sure why I’m doing this to myself, but here we go.

Over all, I think if I was a new player, I would have quit (maybe even rage quit) at many points during this “tutorial”.

At no point was there any mining story presented or available.

Maybe… just maybe… design the game where miners are left alone to mine in peace? As long as you allow space apes to keep descending on miners for content, you won’t retain new folks.
Ads: “This is EvE. You can do whatever you want.” New player: starts playing, wants to mine and admire space CCP: “just kidding, you need to PvP. Prepare to get f*cked” New player: quits CCP: makes surprised pikachu face

Beware, in a next itaration of the NPE, the new player will be interrupted during the mining phase of the tutorial by suicide gankers who are going to private chat the newbro, and requiring them for a mining permit. If the newbro threaten back to report them for extortion, the gankers will link them to the 8 golden rules of Eve where it says the dev not only accept, but encourage and reward bad behavior.

After the destruction of stations and the requirement for cores to build stations etc. I quit playing.
I totally agree, stop making miners the pvp go to for game content. I was a miner/industrialist.
For some mining is boring, I get this. For me, it was a way to unwind from a day filled with pain due to my disability. During the time I was playing I ran three toons all of which were omega on 3-month time spans.
I miss my friends and playing eve. But refuse to return to ingame play until I feel I will be getting a fair shake for the money I spend.

I created a new character to see the NPE (first part too, as I had not done that one either) and I really like them both!

Some points of improvement:

Some things I really liked:

All in all I really like it, the NPE seems like a good way to introduce some basics of EVE to new players in an engaging quest with good pacing and no repetitive ‘kill these, then kill those, then kill more’ that the older NPEs had.

Keep it up, I look forward to the exploration NPE.

What i hate, mining path is always blocked by an omega paywall on ships. I ditch this game because of that