Observations on the Smuggler Event Sites

Seeing as the next Eve story Arc is apparently already in progress, and its very strongly hinted that it is or heavily involves this current event, im creating this topic to be a collective community area to post any information of interest that could possibly expand the story or hint at game changes in the future.

Please keep in mind that this is all observations and speculation. Nothing stated here guarantees any involvement with future releases or lore progression.

Below, please post anything of interest and feel free to discuss them. Ill be posting my own observations and tidbits of info ive learned from others in a bit.

Some minor things others and myself have noticed:

-2 types of structures appear, one in each sides combat site. The Confiscated Smuggler site has a structure @Ashterothi identified as a Tenshu i believe. The Smuggler Hideout has a tower structure of sorts. Docking rings and Undock Points are present.

-The Smugglers seem to be using Minmatar, Caldari and Triglavian ships, while Saro seems to be using Gallente, Amarr, and Edencom ships.

-The Edencom Cruiser and Frigate weapons do not jump targets, while the Thunderchild Boss does. Possibly a new single target weapon?

-Talos has a Police skin that is unobtainable currently in game.

While there is others for sure, thats currently the extent of my observations.

I would just like to point out that, to the best of my knowledge, the Triglavian ships used are all T2 designs using either Minmatar or Caldari technology (Ikitursa is the Vedmak modified using technology from the Eagle HAC and the Draugur is a Kikimora modified using systems from the Bifrost command destroyer)

With the need for resources vastly increased in star systems undergoing fortification by EDENCOM, the Upwell Consortium has provided the ideal structure design for a fortified harvesting co-ordination and resource collection hub. The Stockpile...

You can see one in Yulai at the EDENCOM monument.

Additionally you also see both EDENCOM and SARO imagery on the containment fields in the data sites. This is to be expected as both SARO and AEGIS are divisions of CONCORD, and AEGIS is the core of EDENCOM.

Talos has a Police skin that is unobtainable currently in game.

All the SARO ships do. Even though I really want those skins, its probably nothing but CCP using their tools to apply SARO colors and decals to these hulls the same way you can make weird combinations in EVE_NT Ship Editor for example.

Something else I’d like to add is that there’s some links to the Intaki around. I sadly know too little about that whole conflict to make sense of it but here’s some stuff that may point to it.

First of all our good friend Leopold (last seen in Great Wildlands presumably because he works for the deathless) is born Intaki and his attaché’s diplomatic mission was to resolve the intaki conflict. This whole diplomatic crisis seems to have significant impact on the Intaki situation already.

From Esri’s Capsule Subsystem Holostorage EH-CN-J44-006: “Seems Upwell and PKN might be playing a double game behind the scenes when it comes to the Intaki.” Whatever that means.

Also remember that symbol behind the deathless in his speech? The ourobouros, a serpent eating itself. I found this old item when searching for “ida” in game: 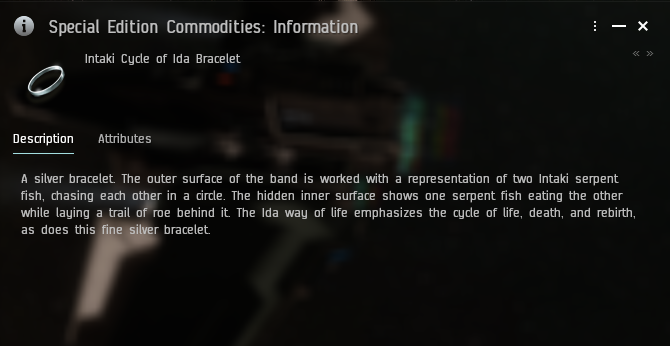 Probably nothing… but a funny coincidence.

Interesting. Maybe the Intaki Syndicate is rising to power?

Also remember that symbol behind the deathless in his speech? The ourobouros, a serpent eating itself. I found this old item when searching for “ida” in game:

I suspect the Ouroboros or Jörmungandr is a signature by CCP Loki. He seems to be the primary person making the scope. In Norse mythology, Jörmungandr is the middle child of Loki’s three children by Angrboða. Additionally, there is a character that is a member of the corporation, “The Scope,” in-game named [Ouroboros](https://evewho.com/character/257744058). This character does not have a portrait, and in-game, you see the default silhouette, which is similar to the hooded figure In the video. Also, CCP Loki has a Twitter account with a similar default portrait that is just a person’s silhouette. No idea of the significants of this, but It was the trail I ended up down when I noticed the Ouroboros on the wall.

Last night, we picked up some Reports (used in T2 industry) and some Smugglers out of the site. Curious if we can release them to the Deathless at a later date.

Some of the symbolism (including the ‘Deathless’ name) and the fact they’ve been appearing in some of the news content recently makes me suspect the Intaki “Aenebra” death cult could be involved.