For sure I didn’t call a pervert you, since you don’t look like a person who even have enough gears in brain to think about perversions. No, really, what else could you expect of a person who already TWICE addressed me because she failed to grasp a concept that there’s a significant difference between me being naked in a cloning tube or undressing in front of others on public.

I thought about mentioning that before each time but was holding myself because I have already had enough experience with you and know that information that gets into your one ear easily flows out from another without meeting any resistance, so I won’t be explaining how exactly dumb you were when you were making remarks about me being born naked.

Instead I’ll just ask you to shut up and talk with this crap to your nurse and not me.
Got it?

I thought about mentioning that before each time

Oh, don’t lie, Diana. We all know it took you this long to figure out how to defend your penchant for public nudity.

Don’t stretch your inabilities to others, Im not a slowpoke in regard of thinking as you. Besides, why would I need to defend against such idiocy? I was just pointing on that, pretty much everyone with at least one working neuron could see how stupid your comment was. Just stop bothering me with your nonsence already.

Besides, why would I need to defend against such idiocy?

Methinks the Strike Commander doth protesteth too much.

caused by the betrayal of his former compatriots who chose to stand with the enemies of the Faith, and not with the Faithful

I see that we’ve now escalated the status of those making war on EM to “enemies of the Faith”. Interesting.

Enemies of Faith are clearly those who were defending the Minmatar Terrorist Outpost in Illegally Occupied by Triglavian Agressors systems, despite their ridiculous attempts to bring excuses to their treason or even to stupidly blame others.

Loyal Imperial and State citizens rejoice that the EM astrahus was successfully annihilated. And if among the smoldering wreck of former minmatar installation there will be found Amarr bodies, they shall be despised as traitors.

I would also highly recommend to report that media outlet to your superiors in the Empire for suspected gallentean infiltration. I believe you have an inquisition that does such investigations?

As an ally to the Empire I cannot intervene into the internal Imperial affairs myself, so the only thing I will offer is my sincere wishes of good luck in clearing your ranks from those who are unworthy.

And let Amarr be Victor!

Nice to see you so open in your support of the Triglavians that you celebrate the destruction of an EDENCOM-aligned facility.

Oh for Maker’s sake, look at that, someone from organization who helped Triglavians occupy the most significant system now squeals at Caldari officer, blaming in “supporting Triglavians”.

Cease turning IGS into circus, you little useless creature. We are coming here to talk to people, not to listen to psychedelic products of your inflamed imagination.

If you don’t want to be called out for supporting them, don’t support them.

I could really use some kind of diagram or flow chart to explain this kind of thing.

Oh don’t you start with that nonsense.

Are you suggesting that Stribog are not “enemies of the faith”? 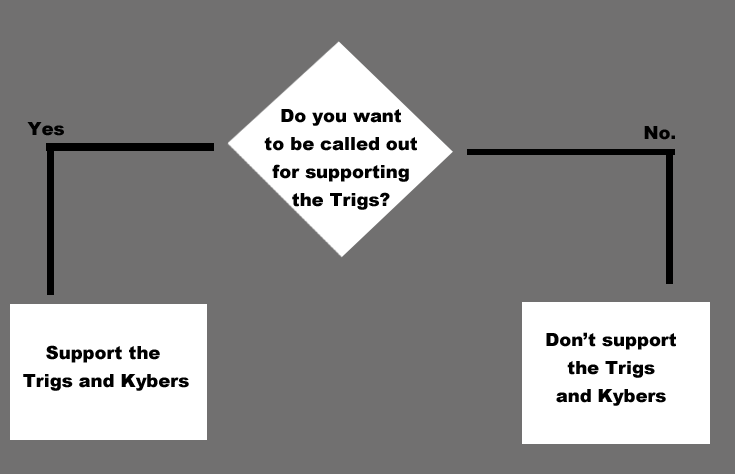 Of course he is. Just like Diana, he’s perfectly willing to excuse any and all attacks on his own nation if it means the people he dislikes get hurt, too.

the chart doesn’t explain how shooting a pro-edencom EM station in Pochven, being used to attack Triglavians with, is actually an anti-triglavian thing to do.

Never claimed it would.

Are you suggesting that Stribog are not “enemies of the faith”?