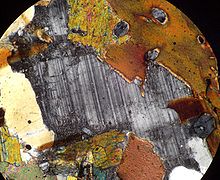 Plagioclase is a series of tectosilicate (framework silicate) minerals within the feldspar group. Rather than referring to a particular mineral with a specific chemical composition, plagioclase is a continuous solid solution series, more properly known as the plagioclase feldspar series (from the Ancient Greek for "oblique fracture", in reference to its two cleavage angles). This was first shown by the German mineralogist Johann Friedrich Christian Hessel (1796–1872) in 1826. The series ranges ...


There’s also some on the moon. 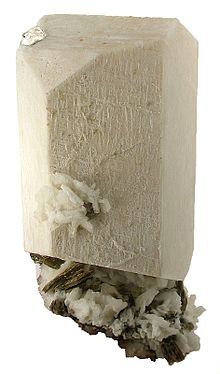 Feldspars (KAlSi3O8 – NaAlSi3O8 – CaAl2Si2O8) are a group of rock-forming tectosilicate minerals that make up about 41% of the Earth's continental crust by weight. Feldspars crystallize from magma as veins in both intrusive and extrusive igneous rocks and are also present in many types of metamorphic rock. Rock formed almost entirely of calcic plagioclase feldspar (see below) is known as anorthosite. Feldspars are also found in many types of sedimentary rocks. The name feldspar derives from the...


not veldspar, though it is similar in spelling.

Oh yes, and one more thing, I was finally able to see and mine most of the new moon ores for some reason(s).