So I have been following a PI set up similar to this http://yuza.su/planetary/high-tech-production/broadcast-node/. I think this guys guide to P4 and P3 PI is great and wanted to make sure he gets credit for planet set-ups. Whether it’s the most efficient or not is not why I’m posting. I use 3 characters all with lvl5 Interplanetary Consolidation and lvl5 Command Center Upgrades to feed to Factory planets all the resources needed to keep the planets going, so 16 extracting planets and 2 factory planets. However after the first full planet load (Initial setup + full planet cycle to make in this example 114 broadcast nodes) My planet starts to use products as soon as I drop them from space. Even though its only a few seconds between start to finish by the end of production my factories will be 1 product off to finish the last broadcast node. So instead of 114 ill have 113 and a P4 factory with all but 1 factories input to finish the last P4 product. Thus my suggestion to add a pause button to a planets production which would allow me to stop production for a minute while I load all my resources down to the planet. Has anyone else had similar issues with their planets? I don’t think this would be a huge dev task to add but I’m no developer and not sure but I hope it would anyone who uses large factory planets to produce P4

Your argument doesn’t make sense - unless I’m missing something. A pause button will stop production for the time it is in use - you’ll end up with less product, not more. If you have an imbalance in low tier material, you can correct that by supplying more of the material you run out of.

Running a large PI setup at maximum efficiency is a recipe for burnout - allow a little slack in your processes. Also be sure to watch the market - you may find that you’ll earn more by simply selling P1 or P2 rather than making P4. 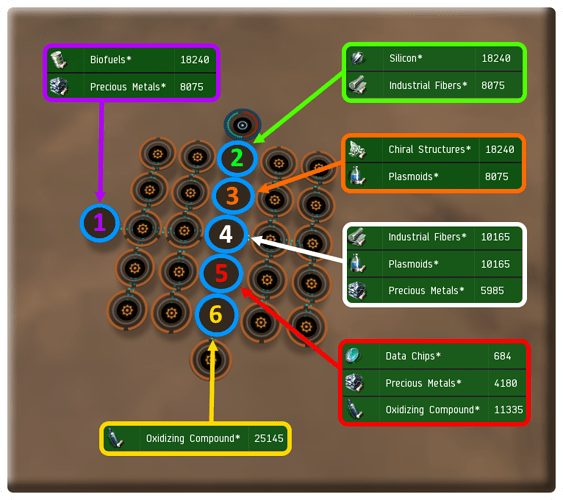 Eve Online Broadcast node PI.png766×680 297 KB
It’s from the website posted above, I think any easy going none min/max PI person can benefit from his guide/setup for different P3 and P4 so check him out. So with this setup I fill a planet with the EXACT amount of resources for the indicated end product. So in this case Biofuels, Chiral Structures, Industrial Fibers, Silicon, Plasmoids, Precious Metals, Oxidizing Compounds and Data Chips, and I’ll just leave the planet do its thing. There is enough material there for the planet to run 116 hours or about 5 days and will net 114 broadcast nodes… I do not keep the planet “fed” constantly I let it run through what I put in and then come to pick up what was made and reload the planet then. So the first time you set up the planet everything is fine because you route everything and start production all at the EXACT same time with all the resources you need already on the planet. The problem I have is after the first time, while refilling the resources the factories will immediately start to pull on the materials as you drop in the different silos/launchpads, which with this set up causes your one set of factories to produce things slightly before the other side starts, by the end of 5 days your left with 113 nodes and the P4 factory with all the materials needed but the last input from one factory because it was fed into oblivion before the other factory its routed into finishes its last cycle. I hope that makes sense. Hence the idea of a “pause production” button that would allow you to stop your planet from running its factories so you can reload all your silos/launchpads and then start it back up all at the EXACT time. I can’t be the only one that would benefit from this simple addition. But it’s just an idea so I figured I’d throw it out for others to comment on,
Do_Little (Do Little) August 7, 2019, 6:11pm #4

You have a buffering problem - unique to P4 since it is the only processing stage that increases in volume. Maybe you can put 500M3 of your inputs from the storage unit that receives the finished goods into the command center - that should free up enough space so you don’t fill the storage unit with finished goods faster than you empty it!

How much do you enjoy the initial setup/config of everything? Because an option would be to remove the links from your storage after you have collected everything (prior to putting the new product down). Then drop the refills, recreate the links (and associated input routes & output routes that were lost) and start everything up.

If it’s just an issue with the ‘first and last’ factories you could remove the input links to those and that may be all that is required… not ideal but a workable option (as removing/adding links doesn’t cost anything).