I propose the introduction of PVP turning OFF feature in the game
CCP has made the game in the last year more and more dangerous
Me and some lots of other people specialy the newbros are only here to do PVE and i do not want to be forced into PVP for some1 else`s amusment.
I want to do PVP ONLY when i want to do PVP, if not impossible to be attacked in any form
It can be done maybe just for HIGH SEC or under certain circumstances but thats not my job to figure it out. They can even make a separate server like that. its CCP Job to figure it out on how to separate people that do not want to engage in PVP with the ones that do.
I already threatened CCP with unsuscribing all my accounts and never recomend this game to others if they do not come up with a solution at least stop the game being so dangerous.

i know what you wanna say that thats why they think eve is so great because its PVP,
because there are others that subscribe and that if they do that they will lose alot of subscriptions so don`t say it.

Why not find a new game more suited to your playstyle?

Let’s think logically for a second right, if CCP made a pve server you guys will be complaining on the forums that the pve is getting old and stale and everyone is at end game and bored.

And this will be within the first year of the server opening.

Well, I’ve got some good news for you.

Why the hell did you make me dl that crap lol

Sure thing as long as the PvP turn off switch also turns off ALL sources of your income.

Also I must say: thats why they think eve is so great because its PVP, because there are others that subscribe and that if they do that they will lose alot of subscriptions

Btw no-PvP hisec in EVE Echoes is that way. 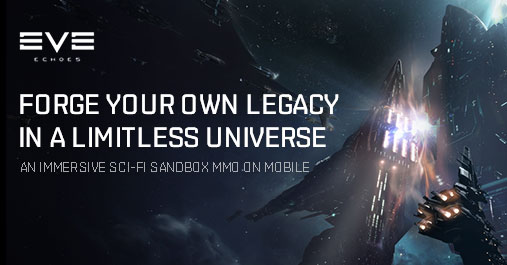 Or you can use a chinese vpn and join their new server: Won’t lie I’m jealous of their new map. 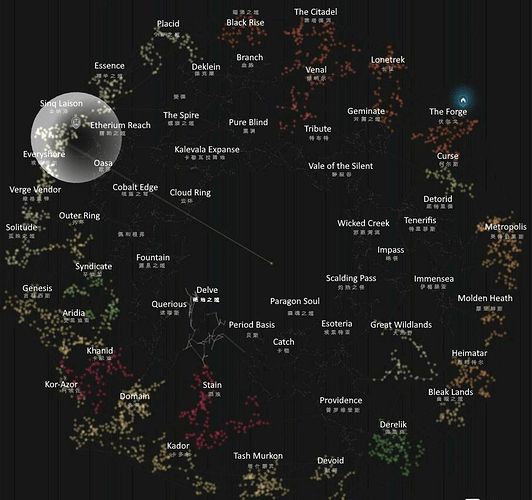 What is its population now?

Or you can use a chinese vpn and join their new server: Won’t lie I’m jealous of their new map.

That map is nice. Hope they found a better solution for Triglivians then Tranquility did, too.

On any normal MMO you would prefer not to volunteer for 500ms extra lag in order to play on a server on the other end of the world, but eve’s been lagging so bad for quite a bit of time that 500ms extra lag barely affect the actual gameplay.

What is its population now?

i am not sure,
Eve online is not at 100k either and eve is also dieng and 99% of the newbros are running away.

Eve was great when it was a cutthroat, CCP pandered to hisec krabs and nerfed everything that made this game great and here we are.

Welcome to the game. I am sorry you don’t like PVP. I hope you grow to like it.

However, you aren’t the first to complain about it in 19 years of the game’s history. I would not get my hopes up about it going away.

I recommend finding a good corp with a willing mentor that is able to guide you in fit and piloting skills, as that will help you become “slippery”. Everything you do from warping to creating bookmarks to where you choose to slowboat dictates how easy you are to catch as prey.

Even if warping your ship around from point A to B seems boring, you’re actually PVP-ing all the time, actively putting your evasion skills to use.

Eve was great when it was a cutthroat, CCP pandered to hisec krabs and nerfed everything that made this game great and here we are.

In which way did CCP ever listen to any highseccer, or do anything that made highsec saver?
In recent years, they threw triglivians through highsec, that basically turned those highs into wh land with smartbomb gatecamping NPCs, nerfed most minerals and even the ores themselves out of HS, and introduced a patch giving +50% damage to void munitions used most prominently by CODE (now Safety), combined with a resistance module nerf that they forgot to also apply to NPCs, i.e. buffed suicide ganking and at the same time made non-suicide fits more vulnerable (suicide fits don’t use resistance mods and almost everything else does use them), on the excuse that in nullsec, capital ships would have been too hard to kill.

It’s CCP’s catering to the nullseccers which is killing PVP. Most members of the large null blocks are there for no other reason that being there allows them to avoid PVP.

Also, I’m not living in high, but if I was, I’d consider Safety far less of a pain then the wardec grievers that wardec but won’t fight and will hide if you carry the fight to them, because the only reason they wardec some/everyone is to farm trade hub undocks.

However, you aren’t the first to complain about it in 19 years of the game’s history. I would not get my hopes up about it going away.

Where’s the NPE dialog popping up, at the clone bay reset after getting podded, that asks you whether you want to share the kill permit? Of cause, nullers don’t even know what a kill permit is, or how limited engagements would work if it was activated, and for that reason such a dialog was never implemented.

they threw triglivians through highsec

I propose the introduction of PVP turning OFF

We are talking about PVP here but frankly, if you pay attention 2 secs you risk nothing in hisec.

Then join Serenity and stop purporting this garbage of a map as good for TQ. This Serenity map makes no sense whatsoever from a gameplay or a lore perspective. This map is exclusively targeted at players that can’t play the game.

We are talking about PVP here but frankly, if you pay attention 2 secs you risk nothing in hisec.

Throwing in Triglivians happened to have the side effect of turning off CONCORD in affected systems, in case you forgot.

Hence the “if you pay attention 2 sec”

I like the idea of changing the map not the map itself its a bit symetrical for my liking, this old map is boring I understand that you are still new (2015) but you too will get tired of it.

Hence the “if you pay attention 2 sec”

Pay attention 2 secs … after losing a ship/pod/both to find out your 1.0sec is now -1.0, I assume?
The changelog stated capsuleers were supposed to find out on their own what CCP had introduced, hence CCP didn’t explain the details of the newly introduced mechanics.

“I don’t undock until this is over” turned out not to have been an option, either, as Povchen happened some moths later, with a number of systems having been under permanent triglivia mechanics since their introduction.

How about you listing a single example of a change introduced by CCP that reduced PVP in highsec in recent time?

Eve would be boring without gankers and war.