So been playing a game on steam lately that has some things that got me thinking about eve’s pve system. I noticed the fluid nature between how you interact with a station. Whats fascinating about this is the cycles of attack it go’s through, even though it seems to largely be based on ranges.

Whats interesting is that when a station launches its primary long range attack, which is hordes of drones, the player has to shift to defensive play, kiting the drones in an effort to stop from taking large amounts of damage. Thus, the player kites at max speed (with boost) shoots down all the drones, then moves on back in range to deal with the stations blast spam, and trying to pump raw dps into the shield to get it to drop to do damage to armor/hull.

What’s fascinating about this is how it shifts the player from one aspect to the other, where as normal combat is very similar to eve in the respects that you deal damage, and you try to break each others tanks, not much in terms of play, counter play.

Iv always though the way that drones work in eve is not really all that special, is clunky, and just a pain in general. ITs always been my opinion that drones should be a weapon, and that the gallente should be using them. Lets call it another high slot type. Not turret, not launchers, but bays. to be clear, maybe we should or should not add a third type, im unsure, but it would require the least amount of change if we kept them just as a filler high slot, like we do with nos, etc.

We we look at world of warcraft, one of the (if not the most successful) aspects of game play in combat is the player-gui interaction rate. This is also present in the above game. However, for eve, its not really there in a fluid way.

Maybe we should look at doing something like empowering smart bombs to consume large amounts of energy so you alternate, or lose damage (maybe even a hard requirement).

Then we shift drones to being a specific type (bay) high slot. and its ammo is the type of drones you add. Then we look at changing the way drones work in a way that engages the above styles of game play, where players are managing multiple aspects of the combat.

this would be especially true in pve and would help the interaction between players and npc be less stale. Its a rough idea at the moment, subject to change when i have more time. Also this post is a little away from my usual optimized-dev reading layout (have coding to get back to).

@ccp_falcon
Wrong area, can you move it over to the correct forum. Apologies 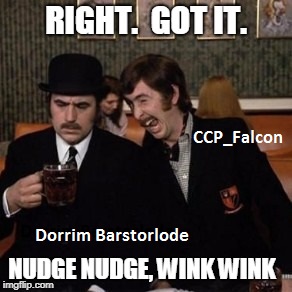 Moving this from General Discussion to Features and Ideas.

I suggest actually getting some decent fleet experience. It is absolutely more than just 2 grouos shooting trying to break reps

I suggest not making stupid suggestions.

Yet you are still clueless & resort to personal attacks, assuming any of that is true.
So… Yeah.
If any of that was true you should know how combat is vastly more in depth than that, and how these ideas would not change anything but make it vastly more stale.

You are playing another game now, and using WoW as a reference, just go away.