[ROUND] Sansha incursion into Veles territory

Inexplicable? You jest? Sansha have been fighting these pests in abyssal space for a long time. What is inexplicable, however, is that Trigs never attacked Sansha space. Let’s hope that Sansha wipe the floor with these trigs.

Knowing Veles Clade, this is probably all some elaborate plot to subvert and destabilize the Nation from within. Tricky ones, those.

As much as I hate the Triglavians and want to free the people they’ve abducted, Sansha abducting them is not preferable. Complete Sansha victory would be quite bad.

Let’s hope the Sansha and Triglavians mutually wipe the floor with one another.

True power lies within all of us. Coiled beneath our fears and insecurities like a resting serpent, it has waited with infinite patience for those last few layers of our imperfection to be stripped away. It waits, as we strive, for a freedom only this part of ourselves truly deserves.

Our flaws and faults, these near-indelible errors pervading throughout human history, they can all be removed. Together, as one, we can overcome the enemy within.

All Stribog Clade kybernauts are under orders as of 12:00 NET 6 November YC 123 to cease all nonessential operations immediately and deploy to Krai Veles.

Destruction of all Sansha elements in Krai Veles required.

Special emphasis on rescue and ground-based defense for civilians in VALE, ICHORIYA, and WIRASHODA.

We cannot allow the forces of Sansha to take away aspirant narodnya by the hivelinkers Nor the corruption of our domains.

Kybernauts of the Kybernaut Sub Clade to send all who can deploy to assist our kin!
Join those who share our goals and put a halt to this poshlost activity.

May the forces and warclones under invasion hold fast and ressist against the incursion!
Help is coming! 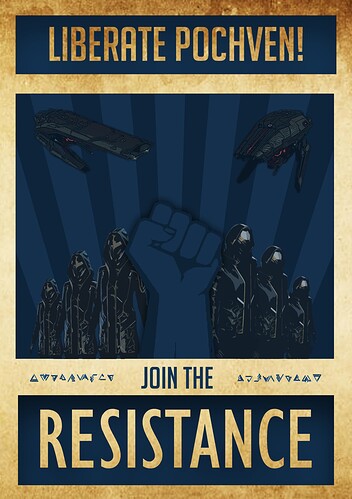 It’s funny because if those systems were in New Eden, then CONCORD forces would be deployed to interdict any attempts to abduct people from the planets, leaving capsuleers to clean up the Nation elements in space.

But since those planets are now in Pochven, that won’t happen. So the Trigs have handed the Sansha, a massive victory on a plate. Good job there, triangles.

But since those planets are now in Pochven, that won’t happen.

EDENCOM does have some presence in Pochven. And the Triglavians themselves are likely to be protective of what I expect they see as their spoils of war. I wouldn’t be too sure there wouldn’t be some efforts by one or both of the factions to prevent Sansha abductions.

I wouldn’t be too sure there wouldn’t be some efforts by one or both of the factions to prevent Sansha abductions.

I especially think the Trigs won’t want the Sansha to get their hands on any of their bioadaptation tech. After all, Zorya ain’t the only game in town when it comes to hostile takeover of distributed software networks.

i see you like fighting for a slave empire

To Sansha’s credit, he has at least promised Utopia. What have trigs promised? Nothing but endless war in their illguided and destructive pursuit of “glorification”. What has that lead to? They destroyed their own space and biosphere to a degree that they had to flee their own space where they could only live with bio suits.

Not that I enthusiastically support Sansha, but if I had to chose between one or the other, I know where my choice would go. And now let’s see how Sansha dismantles trigs in the abducted trig space.

To Sansha’s credit, he has at least promised Utopia.

And the Triglavians promise ‘Glorification.’ That’s at least as good as ‘Utopia.’

Defending Sansha, even to a very slight degree is not making the argument you think it is.

As it’s always good for both sides to lose ships and resources, both sides locking in a stalemate and taking as much damage as possible could potentially draw things out and lead to the best case. If this happens in a way where Sansha can’t do any mass abductions, that is.

On top of promised Glorification.

The Convocation has shown us the Flow of Virage. A path Sobornost Kybernauts strive along fellow Narodnya & Kin alike.

One that does not have us ensared to the chains of the Empires or the illusion filled Utopia of the hivelinked Sansha’s.

Zorya will hear our prayer and bestow upon us Glorification, Sansha’s winnowing will only lead you to calamity.

What’s more to mention, at least in the early days, Sansha showed the propensity to outright corrupt Triglavian Narodnya in some way.

One of the early HFN datastreams describes the Narodnya of a Troika becoming corrupted somehow, after Nation forces boarded their Damavik. The Koschoi and Navka then immediately consented to self-dsetruct.

We don’t know specific information on how Troika are formed or maintained, but:

If the Triglav use something similar to whatever implant tech the modern Jove (or their Inheritors) use themselves, perhaps that would serve to explain some things. Either whatever way in which a Troika’s Navka is inbuilt, or perhaps whatever route their mysterious Koschoi is connected to them through, was (or still is) the source of that vulnerability to “corruption”.

After some experiments that unfortunately led to the “corruption” of Triglav in Semiki, the newly “encrypted” Svarog Semiosis Consoles began to be recovered during a later operation of theirs. While I’d expect this measure may keep them safe from remote corruptive threats, I wonder if this vulnerability still exists.

To my understanding, we do not actually have enough data to draw this particular conclusion about the state of the Proving Loops we’ve had access to thus far through the diving filaments.

Additionally, your endorsement of Nation as having anything at all over the Clades is… strange to me.

Additionally, your endorsement of Nation as having anything at all over the Clades is… strange to me.

I am not endorsing the Nation, I want them to destroy the Trigs. And by everything we know so far, they have been doing a good job with that. So good in fact that the Trigs apparently never even considered to attack the territory of their mortal enemy and instead went for the “easier” target of the Empires. This speaks volumes about the value of their “glorification”.

Sansha getting stronger in any way is the last thing anyone needs.

Sansha is already strong enough to drive trigs out of their space or at the very least drive them to such a desperation level that they leave it themselves and attack a “weaker” target to conquer new space to live in instead of following their own credo of glorification through combat and fight the invaders. If Sansha can do that, it would be easy to just roll over the empires and mutilate them. But to the best of my knowledge he has not done that to this day. He has not left or expanded his domain of Stain for so many years.

The continued Incursions of Sansha and the billions of abducted are a huge tragedy. However, just like the Empires, the trigs also have not found a way to prevent him from coming for their space and start an Incursion in their space. Trigs are just as weak as the Empires against Sansha and joining them only means more negatives than positives. In addition to having lost your home and having to live with biosuits all the time and still getting raided and haunted by Sansha, you now also have to fight continuously to “prove” yourself – to a weak overlord that runs from his enemy just like anyone else.

I think it’s highly likely that at least one Triglavian is going to be forcibly assimilated into Sansha’s Nation, along with many pro-Triglavian and pro-empire baseliners. They’re not likely to get help from the Incursion hit-squads in high sec, so defending against the Incursion is going to be more demanding on their fleets and Kybernaut allies. I don’t think I want to ponder over what happens then.

Of course, that was likely due to an unfortunate blunder of my own making, in misplaced efforts to see how Clade Svarog and Kresnik Svarog might react to to Sansha’s Nation presense - likely leading to the corruption of the Svarog cladeships that arrived there that day. Most regrettable - though Clade Svarog’s soon-after switch to using Encrypted Semiosis Consoles may have been a fortunate development on that end, having learned something from what happened there in that far more minor engagement.

(oops, my bad I suppose)

Reinvestment of material from operations in Skarkon has been difficult, but not as catastrophic as we had feared. Assistance from our sister clan Hecatae has been vital in establishing keypoints in major population centers; particularly in Vale.

Varyazi Clade will continue to act in accordance with with orders from the Paramount to focus away from orbital and military targets and instead establish contacts with Intriguerre and local militias to build multiple quick reaction force depots that warclone forces can deploy to instantly should conventional regional forces come under attack. Many thanks to the revolutionary civilian governments of Krai Veles for their cooperation and willingness to accept us as proven allies.

Cthonic Hecatea have proven themselves as capable specialists in responding to incursions, and I welcome their membership into the Round Table Assembly of Avalon and the Bosena Accords. Moverover, I hope that our competency not only dutifully fuilfills Varyazi’s commitment to honor the call to arms of Stribog Clade but equally acts as a direct demonstration of our capability as warriors to Veles.