We now have reports of Triglavian forces active in known space, firing on pilots attempting to transit the combat zone.

Clearly, whatever one thinks of the validity of the Collective’s desire to extirpate Drifters, Sansha, and non-compliant rogue drones, the Collective does not come in peace.

The Arataka Research Consortium is calling on pilots to collaborate in our effort to develop doctrines and effective combat methods to re-establish spacelane safety and security. Pilots wishing to assist in this endeavor are asked to contact us via our public Galnet communications protocol, via our Neocom channel ‘Consortium Operations,’ and to join us in our combat operations. We will seek to relay any and all information we’re able to, as soon as we’re able to do so.

Pilots with information that they’ve secured by other means are likewise asked to share it for the sake of the general cluster’s welfare.

More as this situation evolves.

Thanks, everyone who has been raiding triglavian abyssal outposts. You started a war.

I guess I shouldn’t be, though: you’ve always been like this, eager to judge, and judge harshly. Even without the facts.

By all indications, the Triglavians welcomed and encouraged capsuleers to dive into their domain, testing us. They seem to have liked what they saw, but our tolerance for “perverse ideologies” seems to have upset them. Support for Sansha’s Nation is definitely one of the things they don’t approve of; they weren’t clear about the rest.

Only, it looks like they’ve maybe been reading the IGS, so unless the Triglavians are pretty ideologically rigid we can maybe blame this more on “shitposting” than on Abyss diving.

Is it weird if I find that kind of hilarious?

By all indications, the Triglavians welcomed and encouraged capsuleers to dive into their domain, testing us.

So you’ve said. I’m not sure how that can be deciphered with how little we actually understand of them and their language. To me things look a whole lot more simple than that: you were attacking them, and now they’re attacking back.

I mean, support for Sansha’s Nation? What tripe is that? We’ve been fighting them practically since they were formed, and almost non-stop since their own incursions started. The handful of idiots that actually support Nation can’t possibly be justification for them believing we’re tolerant of them when the vast majority of our interactions with Nation is violent.

I’d kind of want to blame CONCORD since they gave the go-ahead to diddle around there, though capsuleers would’ve just acquired filaments from pirates and done it anyway. Still, they shouldn’t have encouraged it.

They seem to have liked what they saw, but our tolerance for “perverse ideologies” seems to have upset them. Support for Sansha’s Nation is definitely one of the things they don’t approve of; they weren’t clear about the rest.

And this is why Sansha sympathizers must be destroyed. Still, practically no one but quite a few deranged capsuleers make friends with them, that can’t be the reason to siege entire systems… And if that were the case, why aren’t they sieging just Stain?

Fine,let it be war then!

I had a thought that with all the ‘proving’ they’ve been putting us through was just to train us up so that we’d be a bit more interesting and fun to hunt down just for their entertainment. They’ve now deemed us worthy enough for sport value.

Great, we graduated from ‘bugs’ to ‘cattle’. At least we’ve got that clear now.

Oh wonderful. Just as I suspected upon first contact a year ago.
We got Jovian leftovers from beyond K-space invading us.
Again.
Blasted damnations, what an unexpected turn of events.

our tolerance for “perverse ideologies” seems to have upset them.

I’d say yes. Multiple reports of ships destroyed by Invading Triglavian forces are already there, and there probably will be more coming as the heat goes up.

I must admit there are some… Strange things with those invading ships. For example, we have reports of a destroyed Sunesis-class Destroyer, done by a Leshak-class battleship. How a ship that would normally take ages to lock up a destroyer-sized spaceship still managed to do it before it could enter a safe warp field, I’m still asking myself… 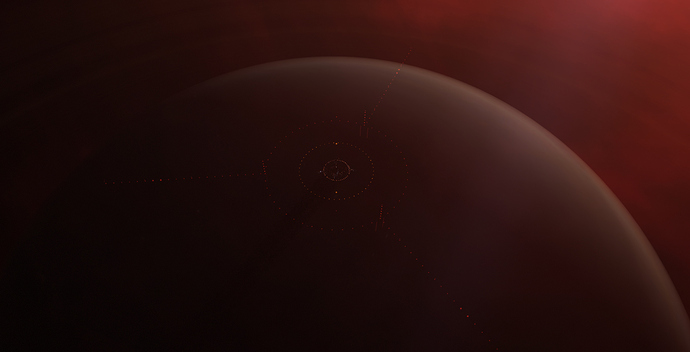 Trig focusmarks seem to be appearing on every structure and station in affected systems; I wonder what’s in store for us?

The lights guide inward, not out.

It seems likely to be a beacon, drawing possible attack fleets once they’re done scouting.

To whom it may concern: at this point, Electus Matari encourages our pilots who will want to fly against the Triglavian incursions to join ARC operations.

We do not agree on all choice of associates of ARC’s, but the Triglavian invasion looks like a potentially real threat, and thus our pilots on ARC operations will treat any red pilots in the same joint fleets with them as neutral.

Bug to cow is quite a leap, at least. In contrast, it is difficult to see much difference between “invasion” and “incursion.” I think the Collective doth protest too much about “perverse ideologies.” Well anyway… salvagers, in you go!

To whom it may concern: at this point, Electus Matari encourages pilots who will want to fly against the Triglavian incursions to join ARC operations.

Well, if that’s your recommendation then shoot! I’ll go for it!

Well, if that’s your recommendation then shoot! I’ll go for it!

Well, technically, that means, encourage our pilots who… I can hardly give recommendations to other organizations. Check with your own command.

Clarified to the above, thanks.

I was passing through Colelie, Deltole, and Bei area in my DST on a long haul. All stations, Empire and Capsuleer alike have these markings.

Some stations were being attacked by Frigate Fleets, and many had abnormally long docking delays - I suspect because of secondary security screenings. Leaving ships awaiting docking rights to possibly be attacked by the Triglavian fleets.

Many gate still had CONCORD presence, some however did not, and instead had camps of Triglavians.

I also ran across roving fleets as well that moved from asteroid belts, and planetary customs offices. These fleets seemed to engage pirates (Serpentis) and capsuleers both, though they do not seem interested in podding. Instead they scan your pod before moving on.

Zorya was also spotted and was at least once separated from “her” fleet and able to be cornered. This did not last long though as destruction of an unknown % of the fleet results in a reinforcement wave for the fleet in a rough ratio of 5 dead to 10 reinforcements. Escalating from Frigate, to Destroyers to Cruisers.

Effervescent red haze in an almost smoke or wisp nebulae also appears in the systems I suspect as possible bleed-over from the abyss. I was unable to tell if it was this or another process that was reducing my hull capacity and interfering with some the drones I witnessed in use.

I’ve heard rumors of “Conduits” " and the Ark in the CONCORD Relay Chat that was established for the Invasion, but I saw none of them myself and have nothing to report beyond possible here say.

I will attempt to provide more information the next time one of my routes passes through one of these areas.