Currently the Blood Raider Covenant is a spinoff “pirate” faction from Amarr that specializes in energy nosferatu modules. In a similar vein there exists another Amarrian heresy, the Equilibrium of Mankind (EOM). EOM npc ships are dark blue Amarr-hulls with railguns and an emphasis on shields. While not a big faction in Eve, they are growing in strength and do possess at least one titan-class vessel according to the lore. 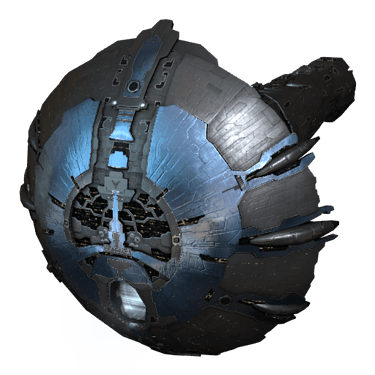 Similar to the blood raiders, perhaps EOM might be a faction-line to introduce a “shield nosferatu” module. Here is a variation that I think fills a unique niche that currently doesn’t exist:

(to clarify, increasing maximum shield strength does not “heal” the ship)

In a nutshell, the shield nosferatu shown above is an active shield extender. It allows a smaller class of vessel to generate a bigger buffer of shields when punching up against a larger vessel in weight class (i,e. Frigate vs Battleship). When fighting against the same weight class (i.e. frigate vs frigate), the current passive shield modules are far more effective.

Let’s assume imagine a small variant as high slot module: it deals about 30 shield damage, and increases your maximum buffer by 300 (but it does not heal) per cycle. And it cycles rapidly every few seconds.

This module has a lot of quirky interactions: Exponential decay above 100% shield strength means that the utility of fitting multiple modules is negligible. In a small gang fight, it might be more useful to leech your allies with a shield nosferatu rather than your enemies. An active tank shield ship might want a passive drake brick as a buddy to generate a buffer off of. Shield flux coils might finally have some use if you want to close range brawl 1v1 against a similar-sized shield-tanked ship. It might be easier to fit some armor tanked ewar ships in shield-logi compositions, etc.

it deals about 30 shield damage, and increases your maximum buffer by 300 (but it does not heal) per cycle.

Since it would allow for offensive logi/buff. There would be need for similar armor module. Otherwise we would end up with imbalance between tank types.

I’m not a PvP nor a fitting nerd. I just mentioned most glaring issues to me. Idea seams decent but I will wait for more knowledgeable people to strip it down.

Edit: me can’t read. It don’t generate isk tank just moves up your max shield capacity. On that note. I wonder how it would impact passive shield regen? Not a fan of passive fit’s but I feel like it would be decent buff. for example in PvE.

As long as you keep the range limited to a very short distance, I don’t think that it would be an issue if it healed shield, too. Would be a hilarious module for RamJags.

Interesting idea in any case. Something that hasn’t been suggested before and that would use another lore facet of the game.

On that note. I wonder how it would impact passive shield regen?

If the shield nosferatu required capacitor to use per cycle, then energy neuts would shut it down pretty hard. Most passive shield regen fits have shield power relays which ruin your capacitor. Some kind of shield flux coil build might be viable though, but weak against long range alpha/arty strikes.

I have concerns this could make Jaguars as hard-tackle even stronger than they currently are.

But the general idea is pretty interesting.

There would be need for similar armor module. Otherwise we would end up with imbalance between tank types.

Did we get a spooling shield logistics ship that i missed?

As for the idea having it increase your max shield hp is messy, nothing else in the game functions like this and passive recharge is one of the reasons it took us so long to get shield hp implants.

It might be interesting if it just healed similar to the way nos works on cap, it would just need to prevent assistance similar to a hics disruptor.

As long as you keep the range limited to a very short distance, I don’t think that it would be an issue if it healed shield, too.

Vaguely in my mind, I was imagining that EoM pirate faction ships might get this lifesteal effect as a direct bonus.
Here’s an example image as food for thought: 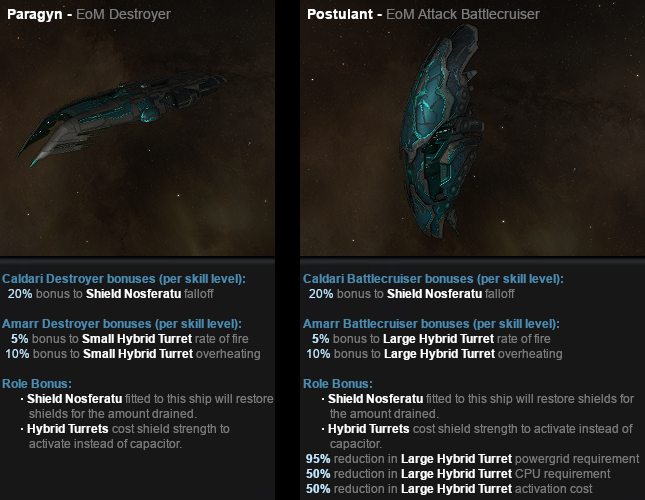 The shield drain effect is balanced with the ship damaging itself on firing–focused on overheating for quick ganks. Goes hand-in-hand with their lore-theme on extinguishing all sentient life in existence (as a sacrifice in order to re-open the Eve Gate).

Did we get a spooling shield logistics ship that i missed?

Spooling Armour reps start less than regular armour reps, so are balanced against regular reps.
They are not a totally new type of module, with previously impossible to get in space bonuses.
Well done comparing apples & oranges.

Still an option armor has shields don’t. And it is currently impossible to get even close to the rep range the trig reps put out. Also gives you far more repairing power than you can get from either shields or armor do to how rr stacking works.

And what impossible to get in space bonuses did my post have exactly?

Besides the two types have never been balanced, the current balance is probably the worst it’s been in since jumping knocked 1/4 of your shields down.

I think asymmetry between shields and armor is far more interesting.

Perfect balance results in stagnation in the meta. It is okay for armor or shields to temporarily have an advantage. As the storyline progresses for faction warfare, pirate groups, and precursor civilizations, new modules will be released. The balance between shields and armor will tip back and forth. Constant change will feel like a real evolutionary arms race. Warfare has changed a lot in three decades on Earth–it ought to feel the same way in Eve if it’s a living universe.

We already have some key differences between armor and shields.
Having similar effectiveness on paper but many tactical opportunities to leverage inherent differences and get upper hand is way to go.

You idea sounds like: Let’s make this month shields OP, next one will be armor. Oh, maybe this time shields will dominate for two months instead of one? It’s just won’t work in a game.

You idea sounds like: Let’s make this month shields OP, next one will be armor. Oh, maybe this time shields will dominate for two months instead of one?

You aren’t wrong. But there’s even more to it than slot layout. Cycle time, rep at start or end of cycle, cap efficiency etc.

since I’ve been obsessed about that lately .