I have been reading that there is a lot destruction taking place just to satisfy the needs of the increasing influx of ore and minerals into the market.

To create a new demand that the refineries and miners would have to keep up their mining even more vigorously, I suggest a new method protecting a ship that would create the demand for more resources.

The idea involves the three aspects of a ships protective layers:

When fitting the new system for each layer a second fitting screen would need to be created in order to fit the Passive modules.

Each ship type would have its own Secondary Systems layout. I will use the Typhoon as an example:

For the Typhoon the secondary fitting slot layout would be:

A medium slot module as a secondary system could be:

Large Shield Extender Reinforcement Structure - Would add an additional 5% to shield HP and 2% to structural HP. /Drawback -2% to velocity

Damage Control Reinforcement Structure - Would add an additional 5% to shield, armor and hull resistances and a 2% to armor and hull HP / Drawback -5% in velocity.

Only one type of module for secondary systems could be fit to a ship at a time.

The increase in module manufacturing to support secondary structural reinforcement will like I said keep the miners and refineries vigorously working to produce and replace the secondary modules that are lost due to combat.

The minerals from the planets in the Abyss sites would be where the minerals for the production of the modules would come from by combining a size able amount of normal space minerals with the Abyss minerals to create a single unit minerals needed to manufacture the reinforcement module from.

I know “TL;DR” is usually used to dismiss an idea, but seriously… after the first paragraph, TL;DR. Summary? If might light skim is correct, isn’t this basically just scripting stuff + power creep?

I know “TL;DR” is usually used to dismiss an idea, but seriously… after the first paragraph, TL;DR. Summary? If might light skim is correct, isn’t this basically just scripting stuff + power creep?

Why? More modules used, more resources used, less glut of resources, less need for destruction (note: I may be reading into that last part).

For me, the hard No isn’t because of complexity. Yes, the objective (having stuff that uses abyssal resources) can already be handled with rigs, or even regular fit restricted modules. By having special slots, then they’d have to create enough variety in modules for it to be interesting. Otherwise it’s a case of just 1 module dominating that slot which causes all kinds of problems. Even with enough variety in module choices for that slot, the “one module to rule them all” still would be likely to crop up, which makes the whole system a waste, in addition to the problems its mere existence would cause.

Most importantly, even in its simplest form, it would have an insane amount of development complexity, even if the player-facing aspect of it is incredibly simple. So, from a simple cost:benefit standpoint, no kidding it’s a No.

Overall, the idea is simply adding more complexity for the sake of complexity (and using “resource sink” as a rationale).

did you miss who the op was?

did you miss who the op was?

I would prefer something more like this
Look at the Apocalypse, Armageddon and Omen modified hulls. 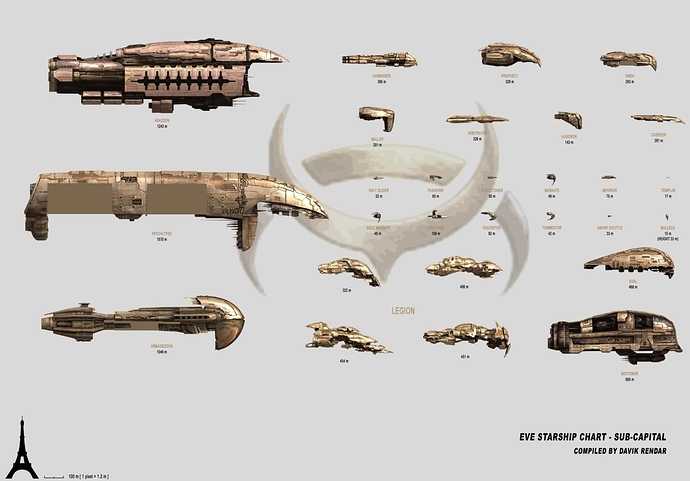 Amarr Ships 2.jpg1599×1115 138 KB
Still T1 ships, but with more internal volume, better EM, Explosive and kinetic resistance, increased hull and armor strength through design, and for the Apocalypse in particular a massive power grid upgrade [IRL every time you double the size of a power plant you triple the efficiency] quadruple the size of the engines, increase the maneuverability by a factor of 2.6 to 3 times the current maneuverability, greatly enlarge the onboard CPU through sheer size increase, use the enlarged surface aria for passive tracking upgrades to improve lock speed, increase the size of the high slots to handle one size up weaponry, but when using standard size weapons tracking speed is quadrupled as the hard points do not have to start and stop the mass of the larger weapons… Make ships better through better, smarter design.

Even if they cost 2-5x as much in minerals and just as long to build as they are simple tech 1 things… Just built to a better standard.
#Craftsmanship
T1.5 Ships FTW!
More mineral usage, more realism, more logic, simple concepts, more innovation.

Given who the OP is, I thought this was going to be a thread about safely mining in your own private Abyssal instance…

Then let’s head it off by saying as long as a cloaked camper is not in system, miners have a reasonable chance of avoiding destruction as is.

No change needed for that aspect.

even if there is a cloaked camper in system so long as they aren’t mining alone.

But can require a large standing fleet of combat vessels for protection.

Systems attrition, it was a joke idea meant to make people cringe for laughs, but compared to the OP, it’s a serious soft counter to a rising materials market. Every time a module cycles, it gets hit on one of its attributes at random for a -0.00x% nerf with higher tiers suffering higher nerfs (e.g. T1:0.001/T2:0.002/T3:0.004) with balance passes fiddling with the T1 value and the others following proportionately according to the geometric ratio, a balance pass could affect the ratio instead but judging by how price ratios are a factor of 5 or so, the factor 2 ratio bends towards the cost-benefit of higher-tier modules. Minuscule, module specific, nerfs like this that are spread out over multiple attributes would take time to achieve a noticeable degradation in the module’s performance and also provide a lively resale market due to the randomised nature of the effect- ‘used modules’ will have cost-benefit considerations to bargain hunters depending on which attributes wound up severely degraded.

Added to this hulls could suffer attrition mechanics to their attributes whenever a remote system (reps, boosters, webs, vampires, etc) targets them. Horrible and unpredictable I know, that’s precisely why it works though- where once instance of attritted stats on a hull or module might be untenable, another instance might be tolerable for ‘just one more’ fight, and a hull on sale might have been degraded in all the wrong spots for a buyer to use while another might have a nice compromise in the nerfed attributes to be worth the discounted price.

To ameliorate the bite of having an expensive hull rot out from beneath you we can consider “Overhaul” mechanics that allow one to reduce the attrition nerfs by [Skill level math]% with each subsequent overhaul on the hull/module having a geometrically reduced effectiveness (compounding 20% loss against Overhaul Efficiency? with a compounding +30% module/hull cost per Overhaul) which adds Refurbished goods to the used items market. Eventually the hulls/modules would be scrap, but the above systems would give them a long life assuming they never get destroyed in combat, with the fractional and randomised nature the mechanical effects would be difficult to game or strategise around meaning it would be a purely environmental challenge for players and corps to deal with and for those with excess funds and a penchant for absolutist quality, most corps and power players already have the resources to keep their warehouses and linemates stocked with fresh, new systems so we’re not really worried about them.

Now, we have a complex environmental system that affects all players evenly and really can’t be gamed for an advantage, so let’s see if we can screw with the idea a bit more: “nano-vampires”

In short, the attrition mechanics represent minute nanoscale losses in function and repairability in some of the most futuristic systems we’ve ever seen on display, entropy not even the wonder of bleeding-edge nanites can fully overcome. Let’s talk about how we can make the nanite’s job harder (and easier).

Nano-Defenders
Nano-Defenders also deploy in charges from personal boosters or remote assistance systems and act as counters to Nano-Attackers; the Nano-Warden is special in that it targets all attrition effects, not just debuffs from Nano-Attackers.
Nano-Wardens: reduce the nerf value of each attrition cycle, can be fitted as a passive module that subtracts one charge for each attrition cycle placed on the fitting hull
Nano-Sentries: reduce the attrition buffs caused by other NAS
Nano-Hunters: each cycle eliminates a tick of NAS of all three types

Code-wise this is a disaster waiting to happen, since it touches every element of a vessel, creates charge groups for items that may not currently use charges, and interlinks everything into a persistent system, but it sounds cool.

Why not just make mining fatigue like jump fatigue?

That will bring down mineral production just as well without a whole lot of coding.

CCP can always change it whenever they want to promote more or less mining.

If we’re talking new ships, some Empire collaboration hybrids might be interesting.

I mean, after thousands of years, you would expect more customization in ship design by now.
Along with artisans and master forging and fabrication facility’s.

You don’t always need more advanced technology to build something better.
Just more time and attention to detail in many cases.

I’m sure I could make some crude illustrations of modifications for most ships on how they could be slightly modified to massively enhance their capability’s without adding to the total cost in minerals to build them or use nothing but the most readily available minerals in larger quantity’s to make crazy strong ships without using moon materials.

But think about replacing Tritanium with Titanium and that’s all…
The hull built out of supper strong and light Titanium.
No redesign of the ships hull plate arrangement or anything, but what it is made out of.
That alone would make a ship faster, more maneuverable and tougher from the sheer lack of mass and better hull material.

I could go on forever with simple variations that could be implemented to give flexibility and innovation to the game mechanics.

Secondary modules?
Sounds like a job for a ship that has sacrificed it’s cargo space for a double sized reactor with triple the power grid and 3x the high slots!
Interchangeable subsystems are what you need!

(I have more… But I need to sleep, I’ll continue chatting with you all tomorrow. o/)

Why am I thinking of T3 subsystems except applied to T1 ships and somehow doing something like rigs only bigger and better?

Because that’s what happens when you add a little bit of MERICA to EVE!
Lol.
But in all seriousness.

Innovation leads to an arms race.

The difference between power creep and innovation is that all the old stuff remains.

It is called making something obsolete.

This can be applied to both T1, T2 and T3 stuff respectively.

We will have to start using a proper tech tree.

In strategy computer games, a technology, tech, or research tree is a hierarchical visual representation of the possible sequences of upgrades a player can take (most often through the act of research). Because these trees are technically directed and acyclic, they can more accurately be described as a technology directed acyclic graph. The diagram is tree-shaped in the sense that it branches between each 'level', allowing the player to choose one sequence or another. Each level is called a ti A ...

Too complicated - so NO from my side, sorry.