After having recently moved to NullSec with Blood Raiders NPCs, I did more Exploration with Astero than before. Or, as usual, I found more combat anomalies (and sometime signatures). So I heard Stratios is an ISK pit if we use it only for exploring, but do pretty good in PVE.

I would like some opinions on that statement, can the SOE cruiser run 0.0 anomalies/signatures ? If yes, can someone link me a good fit for the ship ?

It should be great for all anom’s and DeD’s up to 7/10(neutralizer might help breaking the tank on last boss), for 8/10 it has no where near enough tank same for 10/10, rather use a t3c, would armor fit it because of the em/therm from rats dual rep cap batteries afterburner some resists to em/therm cloak guns and some drone damage upgrades, em drones and some warriors incase some small ship tackles you since they will be em/therm tanked against your drones, although your large drones will probibly have no problem tracking especially if they are under 9km and you manage to fit a web, might be good to have a neutralizer ready as well incase.

I came up with that by looking at your advices, does it sound good ?

For the drones I can’t use the EWAR ones, but I can go up to Heavy. I think I’ll go with the Gallente, plus a fiew warriors in case a frigate tackle me like you said.

No need for cargo scanner, as you should be opening all cans in a data/relic site otherwise they don’t despawn and make new sites and eventually you run out of sites as they wont respawn. 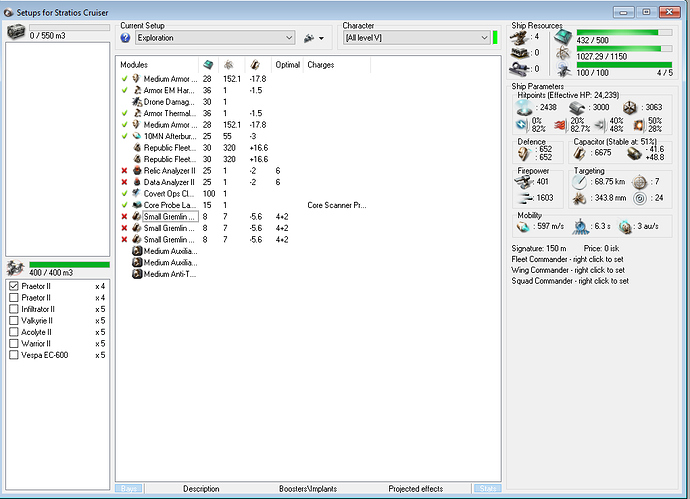 the tank is set for the type of rats in your area therm/em, and your drones are set em which is their lowest resist.
your dps in this fit is only 400 but the way npc tanks work each neut reduces their rep amount by a % so 3 small neuts will half their tank if I remember correctly so you should be able to do some of the harder ded sites in this. Probably not 8/10 as you will be webbed to all hell and scrammed.

Overheating your resi and reps you get over 1k tank which should be long enough to kill any frigs scramming webbing you if your using infiltrator/acolyte drones.

only problem is you have an explosive hole in your tank so if you see someone trying to get you leave immediately if they catch you release ecm drones and jam them and warp off, they are completely broken and I don’t think CCP will nerf ECM drones anytime soon.

I was under the impression that as soon as 1 can is hacked or looted, the site will be set yo despawn on cloak/warp out

If all can’s are hacked it despawns 1-2min after the last can was hacked if only 1 can was hacked and the rest was left it sits there for 4-6 hours or something before despawning and respawning elsewhere. So if you do this to a lot of sites in a region you will screw your self over xD.

Also if hacking a can spawns rat’s then those rats need to be killed or the site wont despawn quickly either.

It should be great for all anom’s and DeD’s up to 7/10(neutralizer might help breaking the tank on last boss),

unless something has changed DeD sites still use the old rats and have no capacitor to neutralize.

It doesn’t have a capacitor but CCP built in an effect where the npc repairs at a slower pace if a neutralizer is on it something like +10% rep cycle time or something, what im not sure of is if multiple neut’s reduce the cycle time further.

You can ask CCP if this is accurate :]. It is a not so well known fact but known none the less.

Ofc a gila will do better because a Gila is one of the most broken ship’s in eve online lol but a stratios can easily jump gates and get out of gate camp’s to get to the ded where as a gila can’t :]

i too vote for strat simply beause it can go cloaky. Gila cant.

Technically if someone want you dead (which is always the case in null) and you know they are coming, all you can do is warp to a celestial and use even a Prototype cloak to stay hidden. But of course, being invisible almost anytime with Stratios is something really fun.