An open discussion thread on the events in Tanoo that took place mere moments ago at the time of writing. 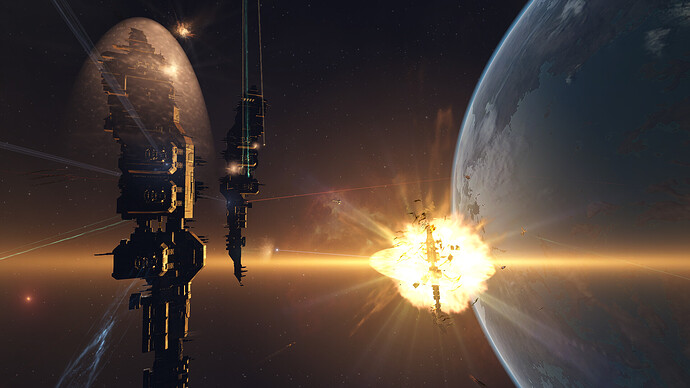 A brief recollection of events:

Now unless I missed something, I saw no chatter from any of the Vanguard in local, nor on any other channels. I’m told the Republic did not permit or condone this attack, as such it’s currently assumed it was solely the machination of the Brutor tribe Vanguard itself - who are known to run mercenary contracts, so we can’t rule out them being but the gun and perhaps not the trigger puller.

It was a mad flurry of factions and alliances all over the grid, I myself ended up in a tussle with Mr. Newelle and his wife - though there’s nothing new there.

What was the purpose? The objective of this strike? Why Tanoo II and why now? There are too many questions… I must admire their gaul, it’s not everyday a corporation like the Vanguard defies the Republic to achieve it’s own wishes.

Anyway, do try to keep this civil, I’m but a curious capsuleer wishing to know more…

The majority population of the Ammatar Mandate are of Minmatar descent, aren’t they ?

So you have Minmatar dreadnoughts bombarding a world inhabited by Minmatar people, possibly for political reasons.

I’m not sure that’s a great look, and may very well prove counterproductive in the longer term.

I don’t think there’s such a thing as a “good look” to be found when discussing any of the greater factions for one, though let’s not forget that it’s not just Matari down there. At this point the Ammatar nations are a blur of each of our peoples.

I suspect the strike was targeted with a little more accuracy than “there’s people around that bit, shoot it” anyway.

This was hot on the heels of news about “Assault on Inis-Ilix Theology Council Law School by Brutor Vanguard Mercenaries”, so, diversion maybe? Quite a steep price to pay for one, though.

Not half… A lot of people onboard a Naglfar, even more so down on a planet. It’s was some stunt if but a distraction.

What is it with Tanoo and trigger-happy crazies in dreadnoughts? First Blooders, now these… whoever the hell they are. I’d rather not have this turn into a regular event.

Assaulting a capital planet with just three dreads (and a few support ships) is suicide, as I’m sure anyone with half a brain could work out. It is really fuzzy as to what was the point of all this. Maybe some kind of technology demo to potential customers? The aforementioned diversion? Hard to say.

So you have Minmatar dreadnoughts bombarding a world inhabited by Minmatar people, possibly for political reasons.

Ammatar people. There’s still a difference even if people want to pretend otherwise.

The Republic has denounced these attacks, as has Brutor Tribe. We should all keep calm heads and wait for further news.

Seems both the Republic official military, and the command of the Brutor Vanguard, have disavowed any involvement in these attacks.

This seems to be getting real complicated real fast.

I am so angry at myself. I was stuck in a damn wormhole when this was going on. Gah!

Honestly, even as a diversion, this makes no sense. It’s enough firepower to guarantee a response, but not enough to either achieve any objective, nor to even hold attention from other avenues of attack for all that long.

Have any of the officers or crew been recovered? Because this reeks of badly-executed misdirection, and not necessarily by any Brutor.

Bombarding a planet is vile. Far too many casualties of those who are undeserving. I will never support such barbaric actions, regardless of faction.

Assuming even one shell got through the planetary shields and defenses, the destruction it would yield may very well have achieved the goal they set out for on this suicide mission.

It’s enough firepower to guarantee a response, but not enough to either achieve any objective

If the target was on the planet, and small enough, simply throwing dread ammo from orbit could achieve an objective.

This assumes the dreads never intended to go back home and were there to make a surgical suicide strike against a particular thing.

Considering they did not carry fuel, and they did carry something else, I don’t think that’s a far-fetched theory, myself.

Considering they did not carry fuel, and they did carry something else, I don’t think that’s a far-fetched theory, myself.

The only particularly convincing goals of such a tactically derelict attack are wider escalation, or a display of reach for domestic consumption.

Not that I’d know anything about extremism, but with marks like that? The shoe fits.

An interesting thing to note, according to ACN, the shots only hit the area around the capital. It appears they weren’t trying to do damage or get large amounts of casualties

Well, there’s your problem. Who knows, it could be a literal hellscape down there, I wouldn’t trust ACN to report it though. After all, these were reported as modified specifically for planetary bombardment, “only minor damage to the periphery of the planetary capital of Tor-Ammat” doesn’t sound very convincing even if they only got to fire off a handful of shots.

I just figured that they, of all people, would want to play the sympathy card, if it were that bad